Gold Coast-based Michael Sim has completed the Queensland quinella after dropped shots and scoring miscalculations saw the final round of the Coca-Cola Queensland PGA Championship conclude in chaotic fashion.

After he stormed to the top of the leaderboard with a course record nine-under 61 in the opening round at City Golf Club in Toowoomba on Thursday, Brad Kennedy spent the next 54 holes trying to keep the field at bay.

With a one-shot buffer at the start of the final round, Kennedy picked up shots at the 3rd, 5th and 12th holes to be 15 under and four shots clear of Sim and the chasing pack with three holes to play before disaster struck.

The Queenslander dropped shots at both 16 and 17 to fall to 13 under and stood on the 18th tee with the understanding that Sydney’s Scott Arnold was safely ensconced in the clubhouse on the same score.

It wasn’t until after Kennedy had hit his tee shot into the left rough that he was informed Arnold had in fact posted 12 under and that par would be enough to complete a wire-to-wire win.

It also opened the door for Sim, who was in prime position in the centre of the fairway and needing a birdie to also get to 12 under and keep his faint title hopes alive.

“Walking off 15 I thought any chance of winning was almost gone,” Sim admitted after a par at the fourth playoff hole was enough to defeat Arnold, a close mate who is hitching a lift back to the Gold Coast on Sunday evening.

“Everything just happened so fast. I stood on the 18th tee at 11 (under) and Scott was in at 13. I actually asked Graeme Scott the tournament director whether Scott had finished at 13. He’s a mate of mine and I thought I was gone but he said he’d actually finished at 12.

“Brad was over in the trees and I saw him lay up and I thought, I’ve got a chance here if I hit a good shot and birdie it, which I did. “I didn’t have my best stuff today – I don’t really think anyone near the top of the leaderboard did. Everyone kept falling away and it was nice to hit a great 8-iron into the last there in regulation and give myself a chance in the playoff.”

After choosing to lay up from deep rough with his second shot, Kennedy three-putted the 72nd hole to miss the playoff entirely, Sim and Arnold trading pars and bogies from all sides of the 18th hole until Sim prevailed at the fourth attempt with an up-and-down from just left of the green.

Sim’s Queensland Open victory at Brisbane Golf Club in 2017 was his first in eight years and a career that once promised all the highs that professional golf has to offer has been in a state of flux ever since.

Now a father with a young son, Sim won the WA Open in October last year but faced such an uncertain future in tournament golf that he is halfway through completing his PGA of Australia bridging course at Burleigh Golf Club.

It’s a far cry from the young man who went toe-to-toe with Tiger Woods in the final round of the 2009 US Open and his latest win ensures the tentacles of pro golf’s lure remain semi-attached.

“I might go to America and do some pre-qualifiers, I don’t know,” said Sim, who will start next week’s Queensland Open at Pelican Waters Golf Club as one of the tournament favourites.

“I’m doing my bridging program at the moment and I’m halfway through that but I seem to have been playing well since I started my traineeship. I’m not too sure what the future holds.

“There’s a lot of emotion. I never thought I’d be here and to come away with the trophy is just amazing.”

Kennedy finished tied for third at 11 under along with fellow Japan Golf Tour regular Michael Hendry, Dimi Papadatos and Korean Chang Gi Lee with Andrew Dodt (64), Denzel Leremia (70) and Anthony Quayle (73) a shot further back in a tie for seventh. 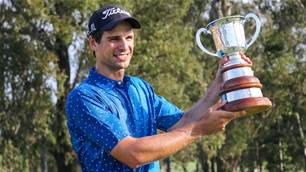 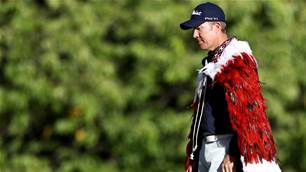