Xander Schauffele celebrated his 25th birthday week in some style by beating fellow American Tony Finau in a playoff to win the $10 million (AUD$14.1 million) WGC-HSBC Champions at the Sheshan International course on Sunday.

The 2017 PGA Tour Rookie of Year picked up birdies on the last two holes of his final round to join Finau on 14-under-par and sank a birdie putt on his second trip to the 18th green before watching Finau come up short with a longer effort.

Schauffele, who turned 25 on Thursday, mixed six birdies with two bogeys for a fourth round four-under 68 to rein in Finau, who started the day with a three-stroke advantage and finished with a 71.

Defending champion Justin Rose shot a 72 to finish four shots behind the leading pair in third place, which was only just insufficient for the Briton to replace Brooks Koepka as World No.1.

It was a third victory on the PGA Tour for Schauffele after his wins at the Greenbrier Classic and Tour Championship in 2017 and earned him a cheque for $1.7 million along with a big kickstart in the race to the 2019 FedExCup. "It means a lot, last season I really wanted to justify my rookie year by winning but I wasn't able to do it," the Californian said.

RIGHT: Jason Day was the best of the Australians with his share of 11th. PHOTO: Andrew Redington/Getty Images.

"This wasn't the same season but it's the same calendar year so I'll take it."

Thai Kiradech Aphibarnrat (71) shared fourth with American Andrew Putnam (72) at eight-under – an impressive feat for both in an exclusive field featuring all three 2018 major winners as well as five of the top six golfers in the world.

Koepka shot a final round 69 to finish in a share of 16th and retain the number one ranking he claimed for the first time after winning the CJ Cup in South Korea last weekend.

Rory McIlroy's hopes of reining in Francesco Molinari at the top of the Race to Dubai standings were not realised as the Northern Irishman finished in a tie for 54th at 10-over-par, three shots behind the Italian.

Jason Day had a disappointing final round of two-over but still finished the best placed Australian in a tie for 11th at four-under for the tournament.

Adam Scott was next best in a tie for 18th, his final round of one-over leaving him at one-under. 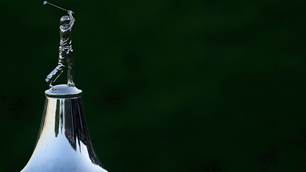