Over the years there have been more than few unexpected first-round leaders in US Opens.

The legendary Bob Gajda in 1963 at The Country Club, or Kermit Zarley (“the pro from the moon”) nine years later at Pebble Beach come to mind. But no matter his level of celebrity, the man or men at the top of the board after 18-holes is/are unlikely to hang around until Sunday evening.

To the surprise of no one capable of basic arithmetic, 50 US Opens have been played since 1969. And in those, the first-round leader has prevailed only ten times. 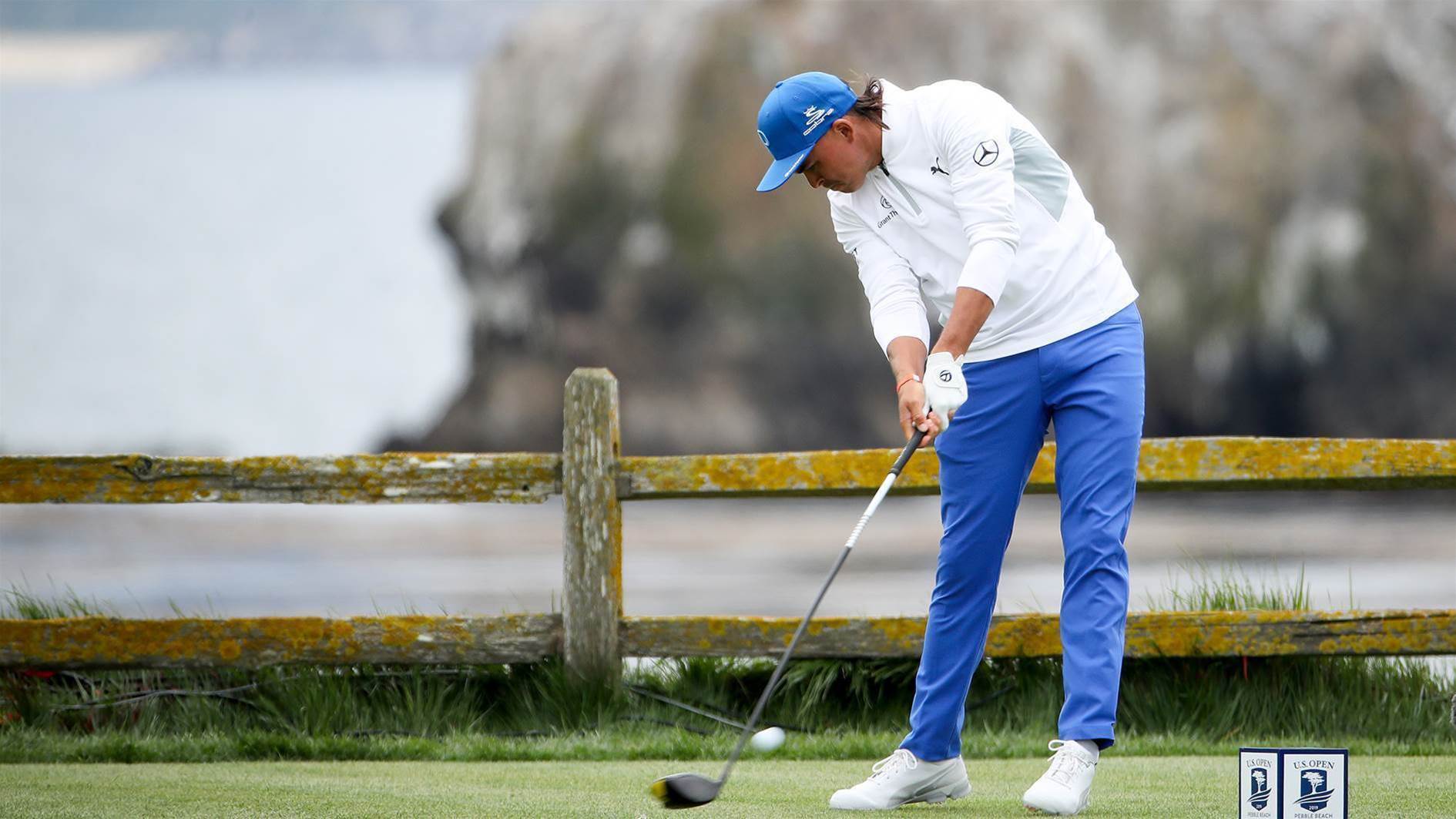 Rickie Fowler (66) pipes a drive during the opening round. PHOTO: Getty Images.

This year, however, has a pretty good chance to make that statistic “11 out of the last 51.” With one-quarter of the 119th US Open over and done with, World No.4 and 2013 champion Justin Rose leads after a six-under-par 65. Five birdies and an eagle dotted Rose’s card, his one blemish a bogey on the par-4 8th.

“Obviously a fun day of golf,” said the leader. “Even when I made a mistake, I was willing to accept it. I was trying to stay patient with myself mentally and a few food up-and-downs kept the momentum up. Then I got rewarded with a hot finish. Birdies on the last three holes took a good round to a great round. 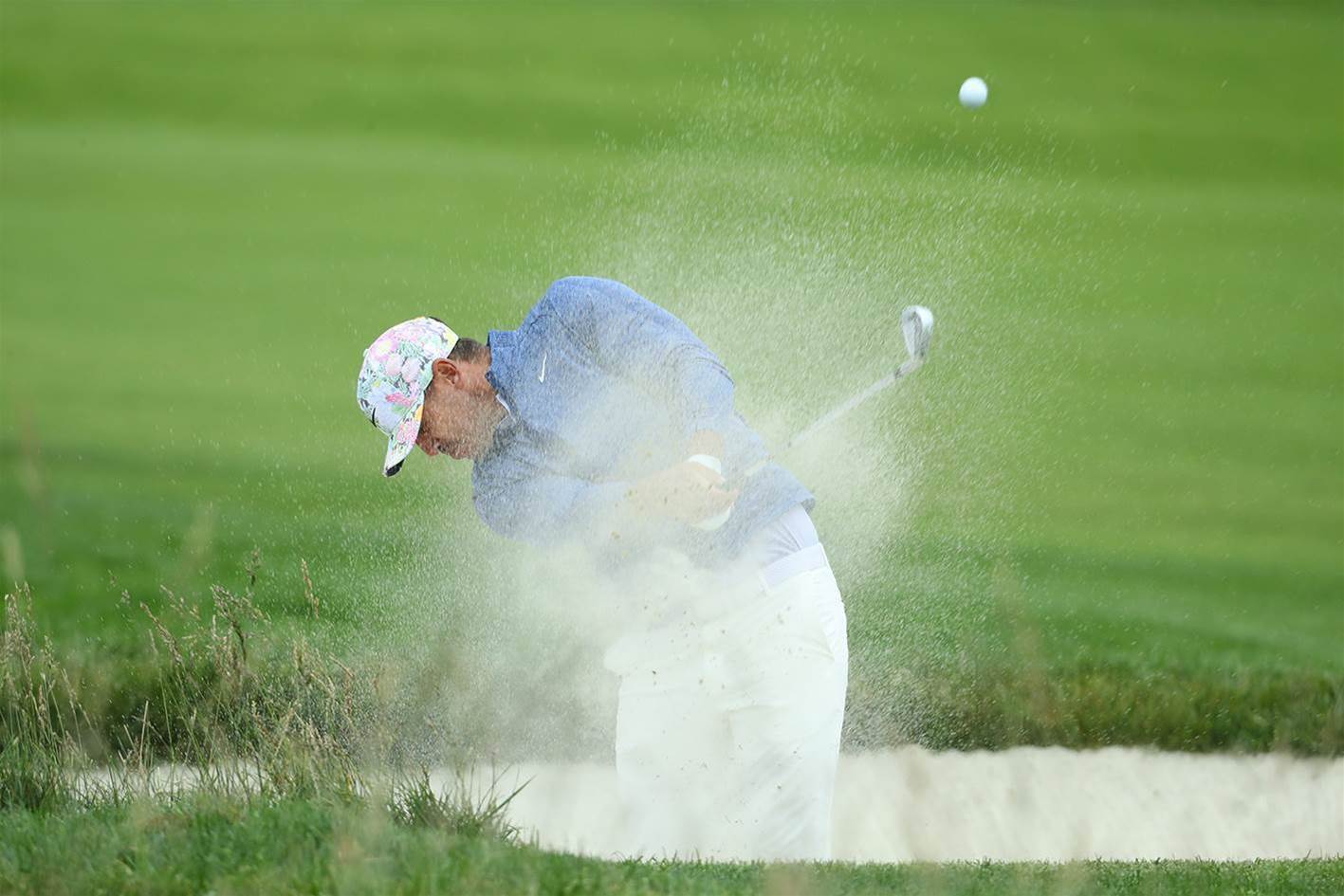 “Still, my mindset is that I am in a 72-hole tournament. This is just a very small step towards my desired outcome. So I’m not feeling the buzz that I would on a Sunday. You can't help but look around over your shoulder. But damn, this is Pebble Beach. I shot 65 and I’m in the U.S. Open. It's a cool moment, whatever transpires the rest of the week.”

As Rose was quick – and correct – to point out, there is a long way to go and, more importantly, a plethora of star names piled up behind the leader. Three legitimate and predictable contenders – Xander Schauffele, Rickie Fowler and Louis Oosthuizen – (tied with Aaron Wise) are five-under.

Ranked 10th, 11th, and 22nd in the world respectively, ultimate victory for any of that high-profile trio would hardly rank as one of major championship golf’s greatest shocks. A Wise win? That would have to go down as a bit more surprising. Winner of the 2018 AT&T Byron Nelson, the 22-year old South African missed the cut in his two previous US Open appearances, has managed only one top-ten finish in 16 starts on the PGA Tour this season and has played only two rounds in each of his last two events. In form he is not. 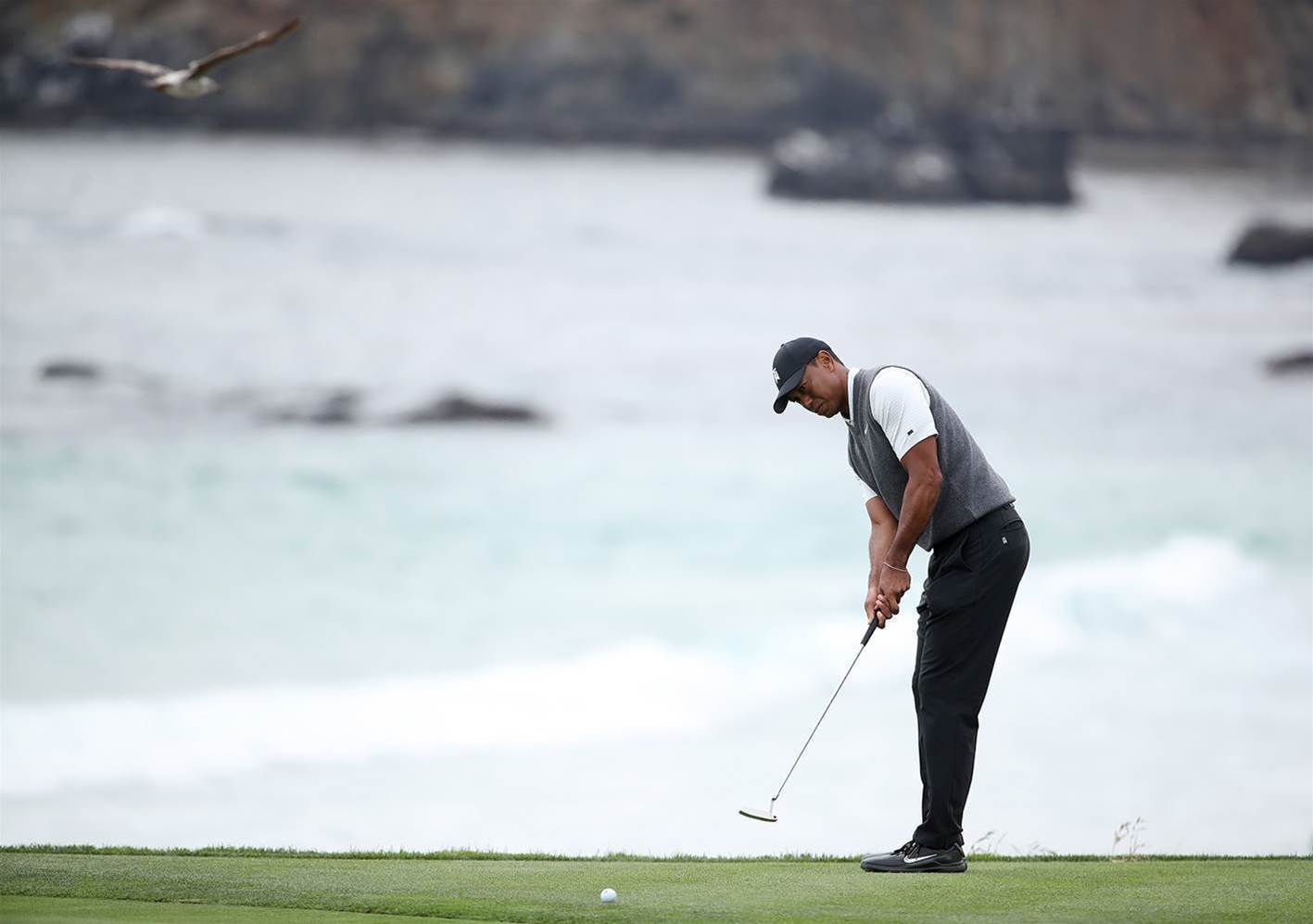 As many as 22 others broke 70, amongst them seven major champions. Perhaps the most dangerous of those – at least in Rose’s mind – will be the 68s shot by Rory McIlroy, Henrik Stenson and Francesco Molinari. Martin Kaymer, Graeme McDowell, Sergio Garcia and defending champion Brooks Koepka are all on 69 alongside Marc Leishman, the best of the eight-strong Australian contingent. Adam Scott and Jason Day both shot 70 (as did Tiger Woods) and are the only other Aussies in red figures.

“I didn't hit my irons as crisply as I'd like,” said Woods, who hit only nine greens in regulation figures. “I tried to miss the ball in the correct spots. I took my medicine when I was in a bad spot and just kind of ground it out. I made a couple of putts, but the majority of those were uphill. That's the key to playing this golf course, you can't be past the flag.”

Leishman’s verdict sounded similar. Early struggles were followed by a nice fightback that took the 35-year old Victorian – whose record in this event is strangely mediocre – to the fringe of contention. 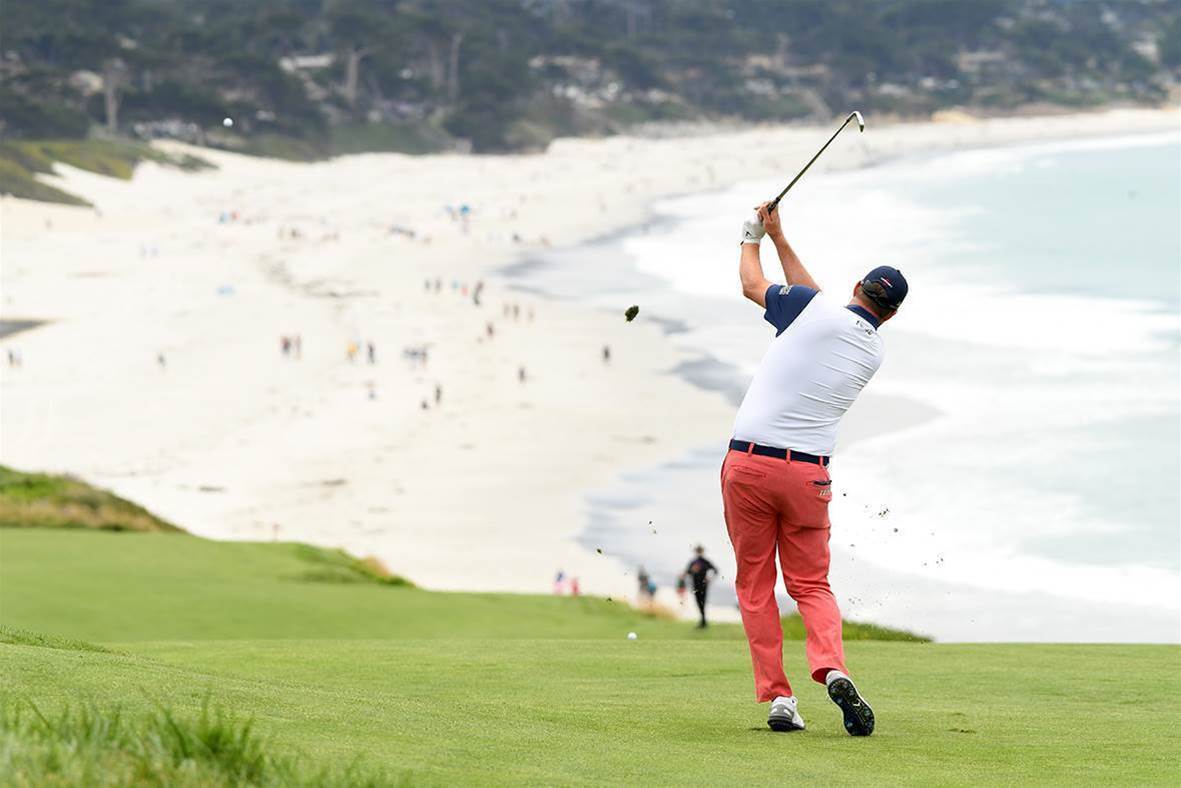 “I got off to a pretty ordinary start and was a couple over after three holes,” he said. “I didn't do a whole lot wrong, but I knew if I kept hitting good shots, they've got to be rewarded eventually. The course was out there to be had, so it was nice to fight back and shoot a couple under.”

In contrast, Scott was more disappointed than delighted with his score. Strolling along at one-under-par through eight holes on the back-nine – he started at the 10th – the former Masters champion sloppily dropped consecutive shots at the 18th and the 1st.

“I hit two really bad wedge shots from the fairway that cost me bogeys on holes where you are really hoping to make at least one birdie,” he said. “That put me on the back foot a little bit after a really solid start. I was playing well to that point but then I kept playing well. I just didn't really take advantage of everything I could have today. But I certainly didn't do any damage either.”

As for Day, he was happy enough with both his performance and the interaction with the new man on his bag, Steve Williams.

“We worked very hard,” said the former USPGA champion. “I feel like things are only going to get better. I'm out there trying to hit the certain shots that he's calling for – and it seemed like it worked pretty nicely. I'm walking off with one-under par. I think it's a step in the right direction.” 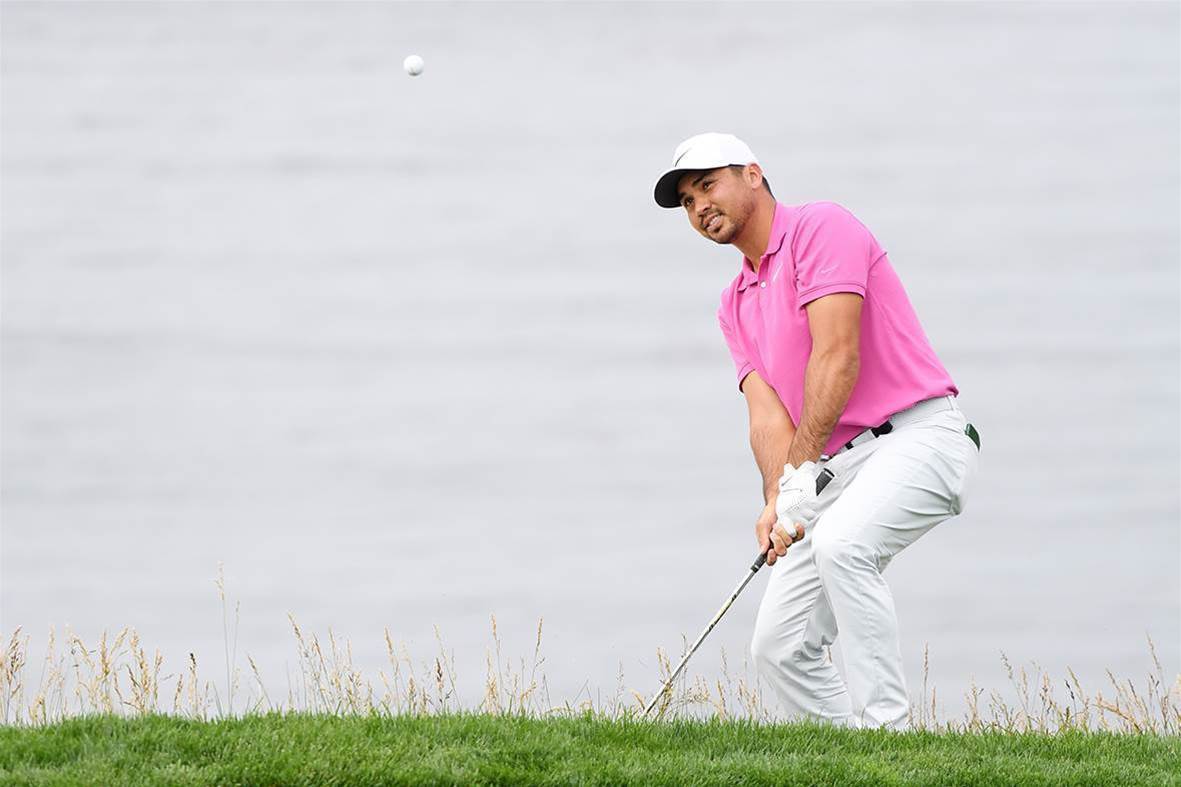 Then there was Marcus Fraser. The likeable Victorian – with former AFL star Brendon Goddard as his caddie – was really down on himself after a bogey-bogey finish undid much scrambling and left the 40-year old graphically bemoaning an opening 73 that could have been better. Or could it? Perhaps not. Perhaps Fraser did well to be level par with only two holes to play. He certainly wasn’t paying himself any compliments after signing his card.

“I drove the ball like shit,” he said. “That used to be one of my biggest strengths. Now I shit myself on every tee. I was scrambling most of the day and made quite a few good par saves. And there were a few good holes where I made birdies. But 75 percent of it is not good enough.

“I hit a few weak ones to the right. It’s getting better but it still isn’t good enough. Especially on a course like this. When you hit into the rough all you can do is chop it out. There is no chance of running it up onto the front edge. It’s just frustrating. There is some good stuff there, but way too much crap.”

As for the other Aussies, Cam Smith’s 71 was best, one shot better than Aaron Baddeley. Matt Jones shot 74 and Brett Drewitt 77.