Europe captain Catriona Matthew and opposite number Juli Inkster have backed their rookies to get off to a flying start in the opening session of the 16th Solheim Cup in Scotland.

Inkster, who can become the first captain to win the biennial contest three times in succession at Gleneagles, picked five of the six debutants on her side for the Friday morning foursomes, while Matthew sent out two of her three rookies in the first two games.

"We wanted to try and get as many rookies out as we could the first day, the first morning," Matthew said. "It's just that it's a long hang-on if they wait to go any later and they're all keyed up, ready to go.”

Germany's Caroline Masson and England's Jodi Ewart Shadoff will take on sisters Jessica and Nelly Korda in match three, with Charley Hull and Azahara Munoz up against Megan Khang and Annie Park in the final contest.

"They actually asked me to play together and I wasn't too keen on it," Inkster said of the Korda sisters, whose father Petr won the men's singles title at the Australian Open in 1998.

"We wanted to try and get as many rookies out as we could the first day … It's just that it's a long hang-on if they wait to go any later and they're all keyed up, ready to go.” – Catriona Matthew

"But the more I thought about it, it would be stupid not to play them. It's not often you get two sisters on one team. They should have the right to play together."

The sisters finished 12th together in the Dow Great Lakes Bay Invitational in July and Nelly, who is making her Solheim Cup debut, said: "We kind of know what ticks one another off and we know how to calm each other down as well. I think we handled it quite well at Dow and kind of got a game plan going."

One noticeable absentee from the opening session was America's Danielle Kang, who caused a stir in the build-up to the event by saying in a podcast that her goal this week to "take souls", "make people cry" and "crush" the opposition.

Inkster insisted Kang's omission was not related to those comments or that they would have any impact on the contest.

"I really don't think the European team needs any ammunition," Inkster added. "We're both ready to go. We both want to play. I'm not sure someone could say anything to me to make me want to hit a shot any better than I do tomorrow morning.

"Things are said and everything's kind of blown out of proportion a little bit. The bottom line is it's a golf competition and we're going to show them some impressive golf." 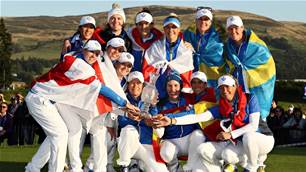 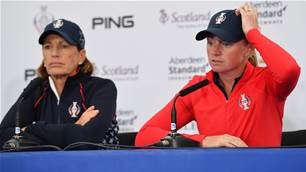 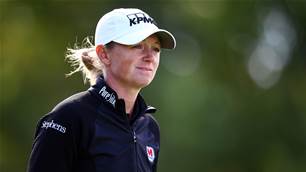