With seven weeks remaining until the top-eight players on each team officially qualify for the 2019 Presidents Cup, Thailand’s Jazz Janewattananond has moved into position at No.8 in the International Team standings after a successful June highlighted by his win at the Kolon Korea Open.

Much of the golf world was introduced to Janewattananond at the US PGA Championship in May, where he stood up to the brutal test of Bethpage Black to finish T14th in just his second major championship appearance. A Presidents Cup bid would mark Janewattananond’s debut in the event and make him just the second Thai player to compete in the Presidents Cup (Thongchai Jaidee).

“For sure I have a chance,” said Janewattananond, whose triumph in Korea was his second win of 2019. “I would love to be in the team and I need to work hard. It’s not easy as the events I play in have smaller world ranking points but I will try to get the job done. I’m playing better golf and I’ve got lucky. I’ve worked on everything and there has been improvements and it’s added up into top-10s or a win.” The rest of the top eight in the International Team standings remain unchanged, with Marc Leishman continuing his tour atop the standings, followed by Presidents Cup veterans Louis Oosthuizen, Adam Scott and Hideki Matsuyama. At No.7, Jason Day remains on the bubble to qualify for a fifth Presidents Cup.

Elsewhere on the International Team standings, South Africa’s Christiaan Bezuidenhout ascended 36 spots in the standings from No.65 to No.29 after a dominant six-stroke win in the Andalucia Masters for his maiden European Tour victory, where he held off the likes of Spain’s Jon Rahm and Sergio Garcia.

On the PGA Tour, it’s been a memorable two weeks for Chile’s Joaquin Niemann. The former top-ranked amateur in the world elevated himself from No.80 to No.37 after back-to-back top-five finishes in the Travelers Championship and Rocket Mortgage Classic. Niemann is looking to become Chile’s first-ever representative in the Presidents Cup.

On the US Team, Chez Reavie collected his second career PGA Tour victory and first in 11 years at the Travelers Championship to move up to No.13 in the US Team standings. The win came one week after Reavie found himself in contention at the US Open, where he eventually finished T3rd following an even-par final round. Reavie, 37, is in search of his first Presidents Cup appearance.

At last week’s Rocket Mortgage Classic, Nate Lashley collected his first PGA Tour title by six strokes to move from outside the top 100 in the standings into the top 50 at No.47.

Elsewhere on the US Team standings, Patrick Reed and Brandt Snedeker both finished T5th in Detroit and each moved up two spots to Nos.20 and 21, respectively.

The top eight for the US Team remained steady, with Brooks Koepka sitting at No.1 in the standings. US Captain Woods, who will make his next start in two weeks at The Open Championship, sits at No.12 in the standings.

The top 15 players in the International and US Presidents Cup Team Standings as of July 1, 2019 are listed below. Click here for the full Presidents Cup standings. 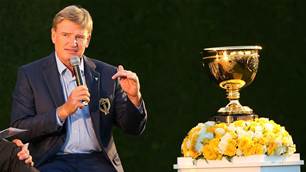 Presidents Cup: Captain Els to have no say in Royal Melbourne set-up