No stranger to coming up short in majors, Louis Oosthuizen picked up where he left off from earlier this season – in the pursuit of re-discovering first place.

The South African posted a bogey-free, six-under-par 64 to take The Open first round lead at Royal St George's in England – one shot better than Americans Jordan Spieth and Brian Harman.

Oosthuizen's only major victory came at the 2010 Open at St Andrews, but he has six runner-up finishes in majors – including this year's US PGA Championship and US Open.

"It depends if you lost it or someone else beat you," Oosthuizen said of his near-misses.

"I tried to take a few days and just try and forget about it and see if I can get myself ready for the next one."

Oosthuizen landed his tee shot on the par-3 16th to set up his sixth birdie of the day.

"(It was) probably in my mind the perfect round I could have played," Oosthuizen said.

"(It was) probably in my mind the perfect round I could have played. I didn't make many mistakes. When I had good opportunities for birdie, I made the putts." – Louis Oosthuizen

"I didn't make many mistakes. When I had good opportunities for birdie, I made the putts."

Following an early bogey, 2017 Open champ Spieth's long putt from the fringe on the 5th hole kicked off a string of four straight birdies as he staked out his spot near the top of the leaderboard.

He added two more on the back nine.

"Here I feel, for the first time since (2017), I'm at least coming in with a bit of form, a bit of confidence and really in my start lines off the tee," Spieth said.

World No.1 Dustin Johnson started with a solid 68 and defending champion Shane Lowry of Ireland carded 71 playing with Oosthuizen and US Open champion Jon Rahm of Spain, whose 71 was spoiled by a double-bogey at the 9th.

Four-time major champion Rory McIlroy ground out a level-par 70, mixing four birdies and four bogeys as the wind picked up late in the day, but the Northern Irishman's problems paled beside those of Phil Mickelson.

The 51-year-old American, who won this year's US PGA Championship to become the oldest major champion, racked up eight bogeys and a double-bogey at the last in an ugly 80. 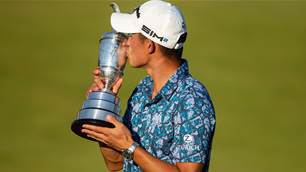 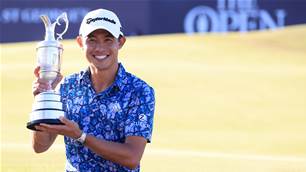