In what would have been Masters week, reminders of Greg Norman's shattering losses and grace in defeat at August National are making their annual return.

For Australians, the torment began well before Norman.

The Masters had tortured Australian golfers for more than 40 years before the Great White Shark set foot on the manicured grounds of Augusta National.

Joe Kirkwood Sr. was the first Australian to play the Masters in 1936.

Jim Ferrier, who was born and raised in Manly before becoming an American citizen in 1946, was the first Australian-born player to record a top-10 at the Masters – a tie for fourth in ‘46.

In 1950, Ferrier led American Jimmy Demaret by five shots with six holes to play in the final round, but bogied five of the last six holes to finish two strokes back and runner-up.

It set the scene for a 63-year stretch of close calls and collapses as the Masters became the great hoodoo of Australian sport – until Adam Scott finally claimed the green jacket in 2013.

Bruce Crampton would earn Australia's next runner-up finish, in 1972, but he never came within three shots of winner Jack Nicklaus.

Norman made his first trip up Magnolia Lane in 1981 and finished fourth. Five years later, he began an astonishing run that included five top-five results in eight Masters but without victory.

Norman needed birdie on the final hole to win, or a par to force a play-off with Nicklaus. But Norman pushed his approach right into the gallery then missed a 15-foot par putt to finish one stroke behind the ageing Golden Bear.

"Watching Nicklaus beat Norman in 1986 was the craziest finish I'd ever seen," O'Hern says.

"First Greg had control, then Seve (Ballesteros) and then finally Jack, who played an incredible back nine. Norman came back to birdie 14, 15, 16, 17 but then made bogey on 18 to lose by one ... are you kidding me? I was shattered for him." 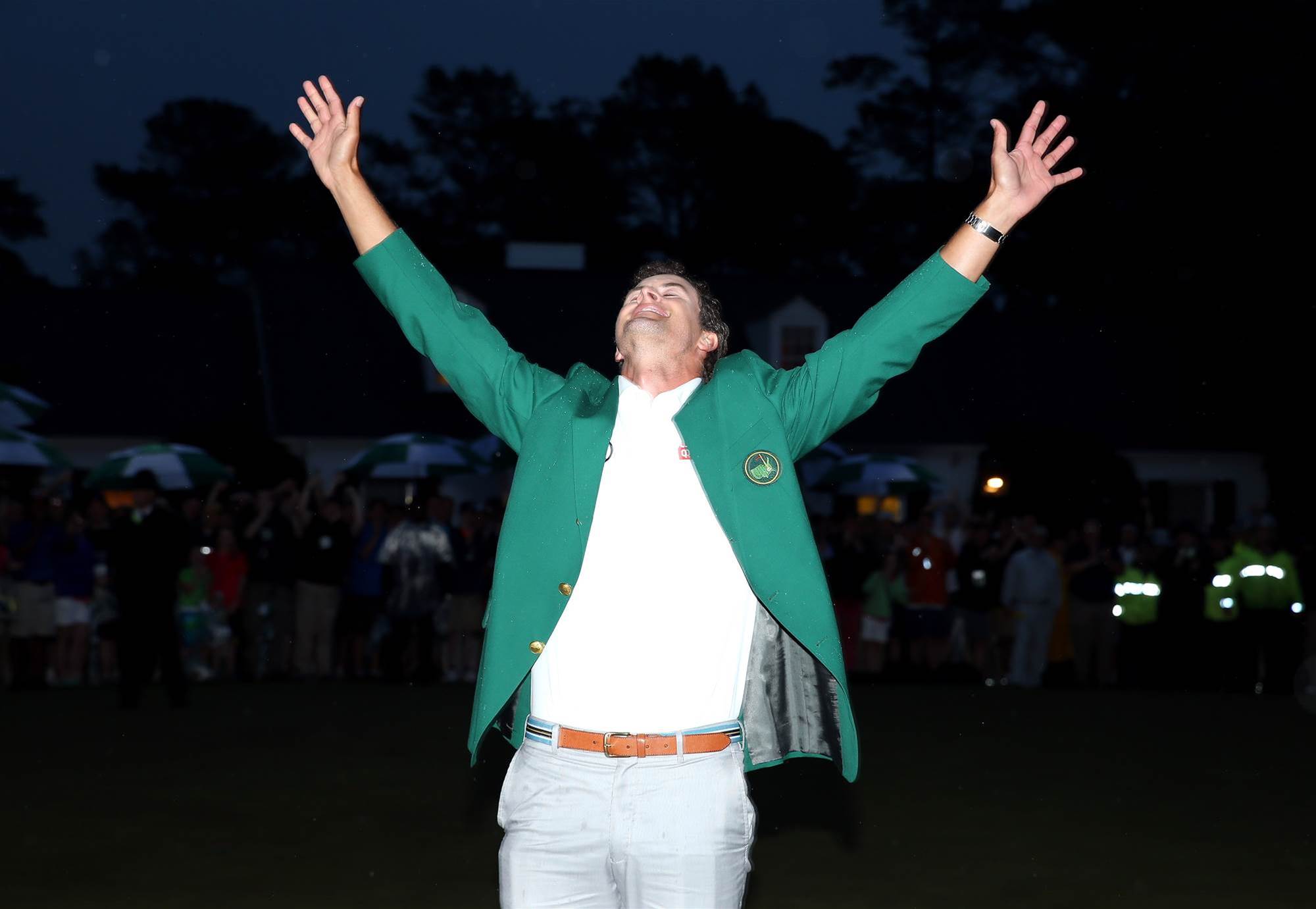 Scott paid tribute to Norman after becoming the first Australian to win the Masters in 2013. PHOTO: Ross Kinnaird/Getty Images.

Time didn't heal the wound. A year later, Norman suffered through an even more gut-wrenching defeat.

Tied for the lead going up the final hole and needing birdie to win, his 20-foot birdie putt burned the left edge of the cup.

What happened next became Masters folklore.

On the second playoff hole, unheralded American Larry Mize was in trouble to the right of the par-4 11th green, having pushed his approach.

Norman played conservatively and his approach settled 50 feet from the hole. But Mize miraculously chipped in for an unlikely birdie from 45 metres away. Norman, visibly shaken, was unable to match it.

"To this day, whenever I re-watch the 1987 Masters, I think Greg's putt on 18 is going in," says US Tour veteran Greg Chalmers.

"His heartbreak in that playoff still sticks in my mind."

Now a course designer, Clayton was playing on the European Tour at the time and still can't believe Norman's putt didn't drop.

"Golf is a big game, played over 7,000 yards, but it comes down to centimetres," says Clayton.

But long-time World No.1 Norman's most shattering loss was still to come.

Host broadcaster CBS began televising play on the first eight holes at Augusta for the first time in 1995.

A year later, the entirety of Norman's collapse was beamed to the world.

The Shark started Sunday in 1996 with a six-shot lead over great rival Nick Faldo. But two front-nine bogies triggered a spectacular implosion.

He made bogey on the 10th and 11th before a double-bogey at the iconic par-3 12th. Norman stopped the bleeding with birdies on the two par-5s, the 13th and 15th. But a rinsed tee shot at the par-3 16th sealed his fate.

Norman signed for a six-over-par 78 to lose to Faldo by five. It remains the largest final-round lead squandered at the majors.

Fellow Queenslander Rod Pampling was shattered for his golfing idol.

“Norman kept coming back after every disappointment. His resilience was incredible.” – Mike Clayton

"I was playing a tournament in Alice Springs that day when we all got on a shuttle bus from the hotel to the course," recalls Pampling, who played in four Masters.

"It was quite a shuttle ride, we were just gutted."

Norman gave the Masters one more real run – a tie for third in 1999.

"Norman kept coming back after every disappointment. His resilience was incredible," says Clayton.

The tone at Augusta had been set by the time a wonderful wave of Australian players began to knock on the door.

Queenslanders Day and Scott shared second place in 2011, the first runner-up by Australians since Norman in 1996.

Day admits Australia's record weighed on his mind on his Masters debut.

"I was thinking about it a lot. I actually couldn't get it out of my head on that Sunday," says Day.

"I really wanted to be the first Australian to win."

But it was Scott's destiny to end the agony for his nation's golf fans. In 2013, Scott birdied the final hole in regulation and then drained a birdie putt on the second extra hole to defeat Argentine Angel Cabrera.

An emotional Scott paid tribute to Norman and his legacy as he collected the green jacket in the Butler Cabin.

"There was one guy who inspired a nation of golfers and that's Greg Norman ... part of this belongs to him," said a choked up Scott.

At his home in Jupiter, Florida, Norman fell to the floor of his lounge room, crying tears of joy as he watched Scott triumph. His work was done.

Australian heartache at the Masters