Australian Open contender Takumi Kanaya sits two shots adrift of 36-hole leader Matt Jones after a second round 69 and guiding him on his way is a Sydney accountant and volunteer caddie.

A visiting player hiring a local to carry their bag during a tournament is certainly nothing out of the ordinary. However, the story of how Ian Elliot teamed up with Kanaya adds an interesting element to the story of the rising star’s attempt to capture Japan’s first ever Stonehaven Cup.

Elliot has volunteered for caddying duties at the Australian Open on a number of occasions, drawing a then teenage Kanaya in 2015 at this very venue, before returning to the World No.1 amateur’s bag last year at The Lakes.

“I have done two other Aussie Opens, I did one in 2010 for Steve Jones, the Victorian, and I did another one for a Chinese player who came out here, so my fifth Australian Open and third for Takumi,” Elliot told Golf Australia magazine. A two-handicapper from Bardwell Valley Golf Club in Sydney’s South West, Elliot won’t be giving up his looping duties anytime soon, even despite the added hindrance of the bushfire related smoke this week in Sydney. And the man who normally spends his days as an accountant has also noted the improvement and added strength in Kanaya’s game over the past two years, which delivered the combination the lead after round one.

“He (Kanaya) must hit it a good 30 or 40 metres longer and a bit more imagination around the greens. When I first caddied for him in 2015, it was 60° lob wedge from everywhere. Whereas now, you can see a bit more imagination, whether its pitching wedge, bump and run, putter from off the green, there is a lot more options. Obviously he played the British Open this year and so he is getting experience playing courses that bounce, so everything has improved.”

Volunteer caddies having success aren’t that rare in Australian golf, Queenslander Jake McLeod winning the NSW Open just last year with a fill-in caddie found via Facebook at the last minute. The lack of big money professional events in this country largely sees those wishing to make a living carrying the tools of professional players largely heading overseas, a fact Elliot admits does hinder his thoughts of ever taking caddying up as a full-time profession.

And while Elliot is among a number of very much part-time caddies at The Australian this week, the Japanese national team, led by Aussie coach Gareth Jones obviously see something in his work on the bag. Reaching out to Elliot both this year and last to carry Kanaya’s sticks.

“Either Gareth contacts me, or Jun his sort of manger within the Japanese Golf Association emails me,” Elliot said of how he has landed the repeat work in recent years. “I sort of keep in contact with them via text or email through the year to find out how Takumi’s going or what’s he playing in, I sort of have a vested interest now in how he’s going.

“I was hoping he was coming out again this year, I was wondering if he would because I thought Keita Nakajima might have come out, but they decided to invite Takumi so I got on the bag again, so was pretty happy with that.”

Admitting to nerves during his first time inside the ropes in 2010, Elliot has become more comfortable with his part-time role.

But come Sunday if his one week a year boss remains in contention for a national open, those first day jitters might just return. 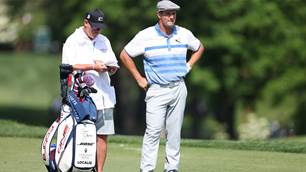