Ultra-consistent last year, Minjee Lee is gunning to turn some of those near-misses into tournament victories in 2020.

The World No.9 had a staggering seven top-three finishes in 26 outings on the LPGA Tour in 2019, but her only win came at the LA Open.

Fresh from a longer than usual Christmas break, the 23-year-old returns to action in Barwon Heads for the Vic Open, a tournament where she has twice previously lifted the trophy – as a teenaged amateur in 2014 and again in 2018.

Much of the focus this week will be on Lee and countrywoman and major winner Hannah Green, although it's World No.8 South Korean Jeongeun Lee6 who is the highest-ranked player in the field. "Being one of the top players coming into the event is always a good feeling, it's exciting for you and you want to play well," Australia's Lee said.

"Obviously it's in Australia, so I want to have a good result as well.

"(Outside expectations) are more of a motivation than a stress, but obviously a little bit of stress too.

"Just a little more motivation for myself to get my butt in there and do well."

Lee had long been considered the female golfer most likely to end Australia's drought in the majors dating back to Karrie Webb's seventh major in 2006.

Instead it was fellow 23-year-old West Australian Green who broke the duck last year at the Women's US PGA Championship.

"I'm not really envious, like I know my time will come," Lee said.

"I was just really happy for her and I sent her a message straight away.

"It was cool to watch for sure."

Lee and Green are almost certain to be Australia's two representatives in the women's golf tournament at the Tokyo Olympics, with Lee having enjoyed her first taste of the five-ringed circus in Rio four years ago.

This will be the second year the women's Vic Open has been co-sanctioned by the LPGA Tour, guaranteeing a strong field.

The combined prize pool for the men's and women's Vic Opens is $3 million – split equally between the two events – a tenfold increase in the space of seven years. 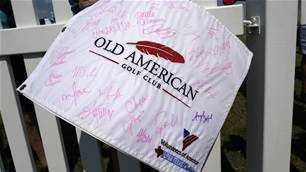 The Preview: Volunteers of America Classic