Tiger Woods has enjoyed a dominant golfing career but added a new memory after he and 11-year-old son Charlie finished five shots back of World No.3 Justin Thomas and his father at the exhibition event in Florida.

Team Woods, both wearing Tiger's signature Sunday red and black, placed seventh among the 20-team field of major champions and winners of The Players Championship alongside a family member at the two-day PNC Championship.

"Memories we'll have for our entire lives," Woods said after he and Charlie posted another 62 at the Ritz-Carlton Golf Club .

"He's not going to appreciate this at 11 years old. I didn't when I was with my dad.

"As the years go by, you start appreciating it more."

Charlie, the youngest competitor in the tournament's history and perhaps its most anticipated, showcased impressive form at the scramble event and on several occasions looked every part his father as he worked his way around the course.

"Memories we'll have for our entire lives." - Tiger Woods.

For Thomas, it was about competing with his father Mike, a long-time club professional in Kentucky and the only coach he's ever had.

Team Thomas birdied the opening seven holes and the father delivered a 5-foot birdie putt on the 18th hole for a 15-under 57 in the scramble format, to get to 25-under 119 and a one-shot victory over Vijay Singh and son Qass.

Australia's two-time Open Champion Greg Norman and his son Greg Jr carded a 65 on Sunday for a share of ninth at 18-under par.

Thomas, who has multiple PGA Tour titles in each of the past four years, wasn't about to compare this with his PGA Championship, World Golf Championships or any other of his 13 Tour victories.

Even so, he called the PNC Championship "100 percent the most enjoyable."

"We were here as father and son to enjoy a special moment."

The PNC Championship – which started 25 years ago as the Father-Son Challenge – has the strongest waiting list in golf, and newcomers to the field this year included Woods and Thomas, Bubba Watson and Mark Calcavecchia.

Woods said this weekend was "without a doubt" the most fun he's had on the golf course this year But he wasn't about to rank the week with other big moments in his remarkable career.

He said the idea was to enjoy the experience together "and we did that." 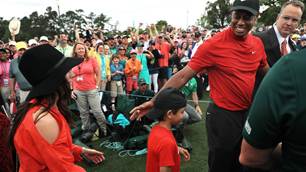 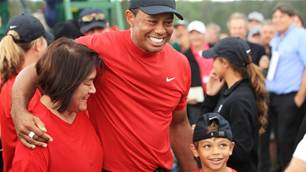