Four days ago, Aman Gupta wasn’t even in the field for the 120th US Amateur Championship at Bandon Dunes Golf Resort. But when a prominent player withdrew on Friday, a spot suddenly opened up, and the 21-year-old from Concord, N.C., performed like he always knew he belonged among the best amateurs in the world.

The Oklahoma State rising junior, who got into the championship when World No. 2 Ricky Castillo withdrew, carded a bogey-free, seven-under-par 64 on Monday at stroke-play co-host Bandon Trails to share the first-round lead with McClure Meissner.

Meissner, 21, of San Antonio, Texas, and a rising senior at Southern Methodist University, posted an eight-under 64 at Bandon Dunes, which will host all of the matches beginning on Wednesday.

“I thought I had a very good chance [of getting into the field], and Friday afternoon when [the USGA’s] Robbie Z[alzneck] called me and told me I was in, that was a huge relief,” said Gupta, who was already on-site at Bandon Dunes and had undergone all the COVID-19 testing protocols. “But I still have a tournament to play, so [the preparation] was just the same as normal.”

Taking advantage of early-morning tee times when the winds were still relatively benign, Gupta made seven birdies over his first nine holes for a nifty 29. He played even-par golf coming home.

“Anyone with a 7:30 [a.m.], 7 [a.m.] tee time definitely has an advantage this week because we didn't have to deal with hardly any wind until I want to say our 14th hole,” said Gupta, who played his final practice round on Sunday afternoon at Bandon Dunes in winds that gusted 30 to 40 miles per hour. On Monday afternoon, winds were gusting in the 30s.

“It was definitely a big advantage to go in the morning and make some birdies early before the wind started to pick up.” – Aman Gupta

“So it was definitely a big advantage to go in the morning and make some birdies early before the wind started to pick up.”

Meissner, coming off a playoff victory in the Southern Amateur in mid-July when he carded a final-round 66 at Maridoe Golf Club in Carrollton, Texas, started more than an hour later than Gupta, and although the winds gradually increased during the round, the Texas native never felt uncomfortable. A 15-foot birdie at No.1 and a clutch six-foot par save at the 2nd hole provided an early boost for Meissner, and he kept the momentum going. He went out in four-under 31 and then closed with birdies on three of his last four holes, including a five-footer on the par-5 finisher.

“I got out there early and made some putts,” Meissner said. “I got off to a hot start and then hit it really well all day. I think I only missed one or two greens. I just gave myself good looks all day. We were fortunate that they moved up a couple [tee] boxes on a couple par-3s. They could have made it extremely hard on those holes, but they were nice.

“I was talking to some of the guys in my group today, and I was like, ‘Yeah, in the springtime in Dallas it blows 15, 20, 25, so although I don't play this [fescue] grass a lot, it feels like a home game for me just because I'm able to kind of be creative. That's kind of where I excel.”

Another Texan, Travis McInroe, a Baylor University rising senior from McKinney, added a seven-under 65 at Bandon Dunes, while 2020 University of Tennessee graduate Hunter Wolcott, 22, of Dickson, Tenn., joined University of Arkansas rising junior Julian Perico, 20, of Peru, with 67s, the former posting at Bandon Dunes and the latter at Bandon Trails.

The Preview: US Amateur Championship 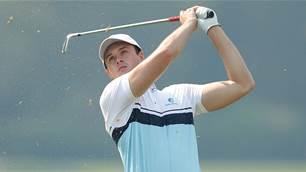