Rory McIlroy views golfers as "independent contractors" and says the PGA and DP World Tours should allow players to compete in the Saudi International in February.

The Saudi International, which will be on the Asian Tour schedule in 2022, has released a list of confirmed golfers including major winners Dustin Johnson, Bryson DeChambeau, Phil Mickelson and Aussie Adam Scott.

The PGA Tour has yet to grant waivers to Tour members, citing a conflict of events as reason for the delay.

The Saudi event is scheduled to take place over the same weekend as the AT&T Pebble Beach Pro-Am.

"In my opinion, I think the Tour should grant releases. It's an Asian Tour event, it's an event that has official golf world rankings," McIlroy said.

"I do see reasons why they wouldn't grant releases, but I think if they're trying to do what's best for their members, and their members are going to a place other than the PGA Tour and being able to earn that money, I mean, we're independent contractors, and I feel like we should be able to do that," he said.

"I should be able to go play where I want if I have the credentials and I have the eligibility to do so. I'd say most of the players on Tour would be in a similar opinion to me."

The Saudi International has invited controversy since its inception in 2019 due to allegations of human rights abuses against the Saudi government. 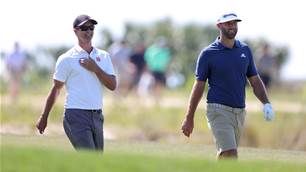