John Lyras is set to head to America next week for a quick three-week trip to play some golf and attend the wedding of a friend. And he might just take some special luggage with him on the plane if things go to plan on Sunday.

Lyras’ scorecard had plenty of colours on it early during the third round, the Sydneysider making bogey at the par-4 first that was immediately followed by an eagle at the par-5 next.

The two dropped shots courtesy of a surprise double bogey at the par-5 5th were back in his possession when the 36-hole leader made back-to-back birdies at 6 and 7, before two bogeys at the 8th and 9th closed an eventful front nine of one-over.

“It was a definitely a different wind today, I struggled on that front nine with those holes into the wind,” Lyras said after the round. “Kind of kept patient and stuck to my guns. Played some pretty decent golf in the middle without much reward. But it was really nice to see that bounce back after that shaky front nine.”

Things returned to regular programming, for this week at least, during the majority of the back nine for Lyras, the 25-year-old adding birdies at 10, 11 and 15 before a driver heading left on the par-5 18th saw him drop his driver in his follow through. 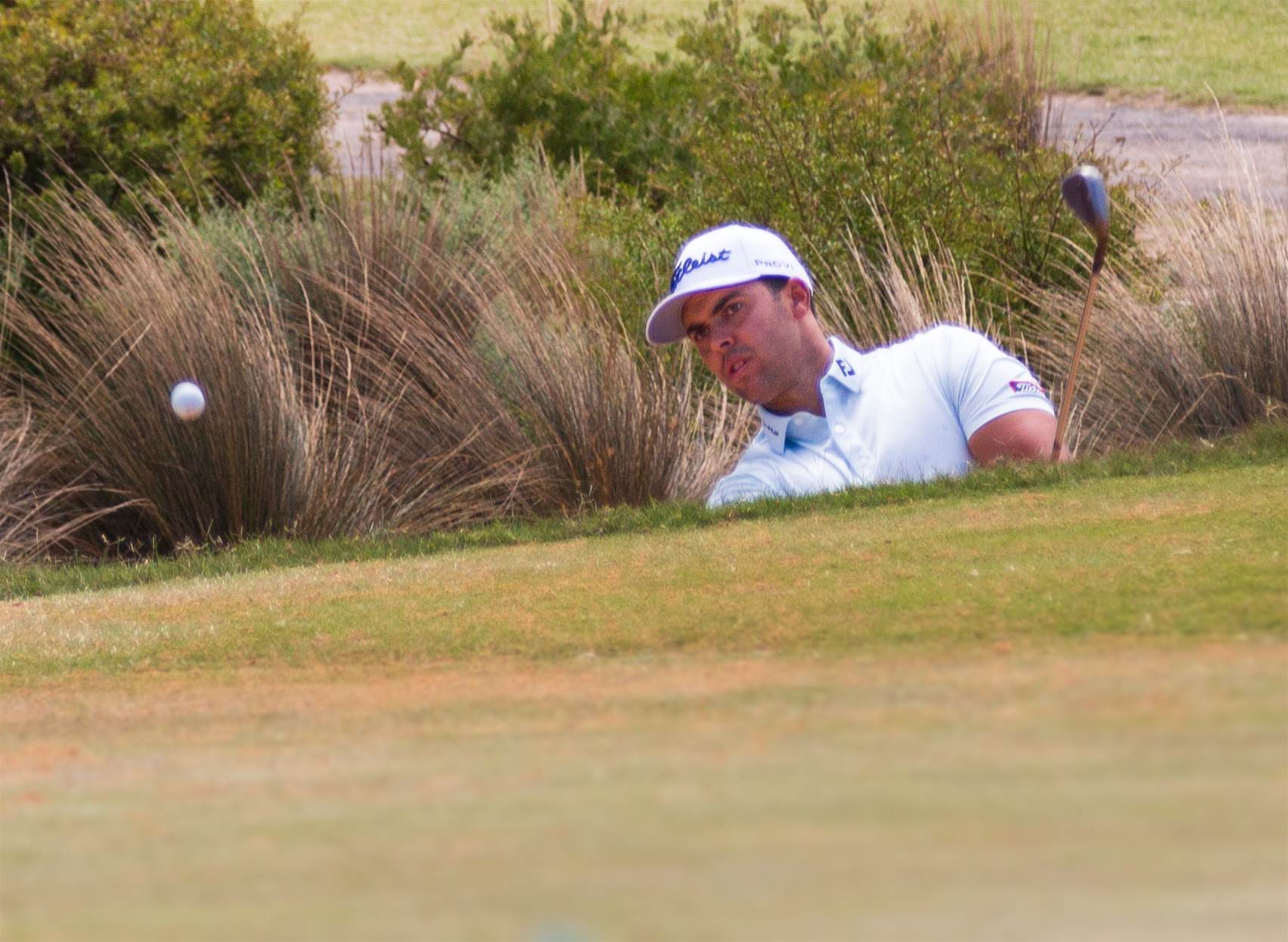 Dimi Papdatos leads the chasing pack, the 2017 champion one back of John Lyras with one round to play. PHOTO: Adrian Logue.

The result was a par that saw him finish with a round of 70 to sit at 16-under-par, with a one shot lead over Dimi Papadatos. A past winner of this event.

‘It felt great, really enjoyed it. But every shot is its own beast. There is so many shots here that you have to think about, you don’t really have a chance to think about anything else,” Lyras said of playing in front of a big crowd in the final group and attempting to focus on his own game exclusively.

Papadatos’ 68 was bogey-free despite the 2017 champion not having his best golf on Saturday.

“I don’t think I hit it great, I hit a few average shots with my irons and I sort of got away with it, my short game was really sharp. I don’t feel like I am playing fantastic but I think I am managing it really well,” Papadatos told Golf Australia magazine.

“Simply put, I want to play the best round of golf I can. I don’t like playing bad rounds of golf. It doesn’t sit well with me.” - John Lyras.

“I am not really going to worry about what anyone else is doing. Just get off to a good start tomorrow on the first nine holes then it comes down to business after that, so it should be good.”

Two back of Papadatos is a pack of players at 14-under, with Kiwi Ben Campbell, Zach Murray, Matthew Griffin and Aaron Pike all previous winners on the PGA Tour of Australsia, hoping the pressure of joining that group might be too much for Lyras.

Earlier in the day Braden Becker shot a course record 62 to sit two shots further back, with Josh Younger also in contention at 13-under.

““I was hoping to shoot two or three and make the next cut. I got off to a flyer, I holed a long putt on our first hole,” Becker told Golf Australia magazine. “I just said to myself ‘If you make a couple of putts you make the cut, and if it starts going your way, do what you always do and put the scuba gear on and go low’.”

For his part, Lyras will do his best to put the potentially life changing result out of his mind tonight, and whether or not the Vic Open trophy is considered carry on or checked baggage on his flight stateside.

“Simply put, I want to play the best round of golf I can. I don’t like playing bad rounds of golf. It doesn’t sit well with me,” he said. “Tomorrow is no different, yeah there is a bit more pressure on me from external pressures, to me I just want to go out there and play the best I can. If I can put a good round together I will be happy.”