Eddie Pepperell defied miserable conditions to win his second European Tour title of the season in the British Masters, with Victorian Lucas Herbert tied for third.

Pepperell carded a closing 72 at a wet and windy Walton Heath to complete a wire-to-wire victory on nine-under par, two shots ahead of playing partner Alexander Bjork from Sweden.

Herbert, who shot a final-round 69, and England's Jordan Smith finished two shots further back at five under.

The World No.104 had looked to be making a charge with birdies on the 2nd, 4th, 5th and 6th to turn in 32 but three bogeys on the back nine saw him come home in 37 as he secured a third consecutive top-10 to make it seven for the season.

Tournament host and World No.2 Justin Rose carded a closing 70 to finish eighth on three under. The win will take Pepperell into the world's top-35 and almost certainly secure a Masters debut in 2019, with the top-50 at the end of the year qualifying for the first major of the year at Augusta National in April.

Pepperell was ranked outside the top-500 as recently as May last year, but won the Qatar Masters in February and followed a runners-up finish in the Scottish Open with a tie for sixth in the Open seven days later.

His three-shot overnight lead was down to a single stroke when playing partner Bjork covered the front nine in 34 and Pepperell three-putted the 9th, the same hole where he enjoyed a spectacular hole-in-one on Thursday.

However, the 27-year-old promptly holed his second shot to the 10th from 122 yards for an eagle to move three clear and a par save from off the green on the 14th looked to have sealed the win.

There was still time for some late drama though as Pepperell dropped shots on the 15th and 16th to see his lead cut to a single shot, but Bjork bogeyed the 18th after driving into the heather and Pepperell saved par from a greenside bunker to secure a deserved victory. 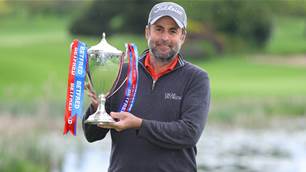