The Australians are in the mix but have their work cut out as Annie Park shot a seven-under-par 65 to take the lead after the opening round of the Canadian Open.

Park leads by one from a chasing group of five that includes World No.8 Brooke Henderson, Anne-Catherine Tanguay and top-ranked Jin Young Ko, at the Magna Golf Club.

Su Oh is the best of the Australians, her four-under total leaving her in a tie for 11th.

Compatriots Sarah Kemp is a shot further back with Minjee Lee, while Katherine Kirk and major winner Hannah Green are at one under.

Canadian teen sensation Michelle Liu shot a nine-over 81 and is third from bottom in the field. At 12 years, nine months and six days, Liu become the youngest player ever to compete at the Canadian Open with the previous youngest being defending champion Henderson, who was 14 when she first played in the event in 2012.

RIGHT: Park leads by one shot after the opening round of the Canadian Open. PHOTO: Stuart Franklin/Getty Images.

Park hit 15 greens in regulation and eagled the par-5 9th.

"I was just trying to break my own personal record. Just wanted to go to nine under," said Park, whose best score on Tour is a 63."

"Tough 17th hole, tough break there; had a bogey. Tried to make up for it on the last one and just fell short."

She could play her way onto the US team for next week's Solheim Cup with a strong finish in Canada.

The top-eight players in the points standings after the tournament will make the team, with two additional spots determined by the world rankings and captain Juli Inkster getting two wild-card picks.

Park's easiest avenue to qualify for the team would be via the rankings – she is 42nd, one spot behind Austin Ernst. 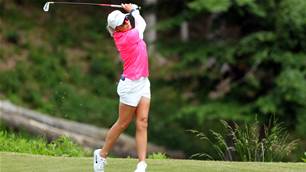