Local favourite Vitor Lopes has shot a seven-under-par 65 to top the leaderboard after day one of the Open de Portugal in Vau.

The 24-year-old, who predominantly plies his trade on the third-tier Alps Tour, took advantage of a field missing those competing in the US Open with an eagle, six birdies and a single dropped shot.

At seven under Lopes, whose biggest win on the European Tour's feeder Challenge Tour was a cheque for $A3,000 in Denmark last year, led by two from France's Damien Perrier and Spain's Carlos Pigem.

Queenslander Maverick Antcliff was five shots off the pace with a two-under-par 70, while Wade Ormsby is struggling to make the cut after finishing six-over. 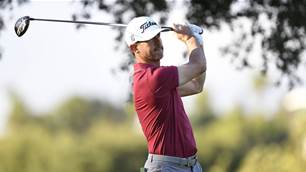