Daniel Gale lost a $20 bet to good mate Grace Kim today, but he could not have cared less.

Gale, 25, fended off a swag of challengers from around the Dubbo Golf Club to win the Western Open by a stroke – his first multi-round professional crown in Australia.

As it turned out, he needn’t have looked too far because his fiercest rival came from within the final group as Kim launched a tremendous late attack.

Earlier, Gale had peeled off four birdies on the front nine as Kim and their playing mate Charlie Dann couldn’t find the spark to go with the overnight leader.

By the time Kim and Dann finally matched him on the ninth green, Gale had pushed out to 13-under to ram home the edge of his opening 63. 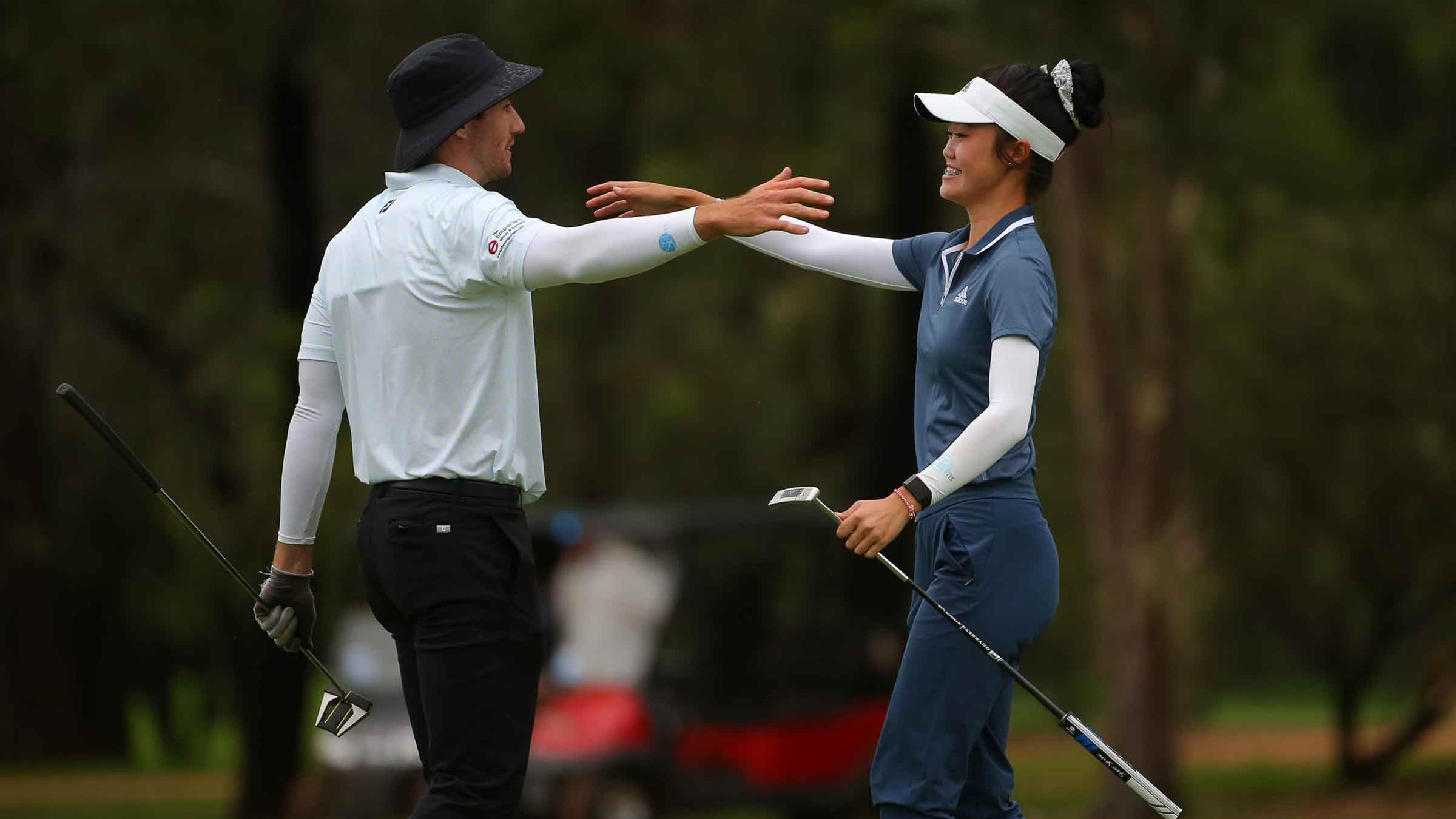 Gale might have lost a bet to Grace Kim but claimed the win at Dubbo Golf Club. PHOTOS: David Tease/GolfNSW.

At that point, Josh Armstrong (64 to finish -9) and the white-hot Justin Warren (64 to finish -12) were making the most noise among the chasing pack.

And to be fair, it wasn’t until Warren took bogey from the front right sand on the 18th that his sensational challenge ultimately proved fruitless.

But that was all pre-Kim.

Playing against the men and in her first professional tournament on home soil, the 20-year-old Sydneysider made five birdies in succession from the ninth to the 13th to roar from her overnight -7 position and back into contention.

Her putts for birdie on the 14th and 15th burnt the cup before another one dropped on the 16th and the reigning Australian Amateur champ was suddenly within one after Gale’s three-putt bogey from the back fringe on the 13th.

Kim put another great roll on her birdie attempt on the penultimate hole only to watch it finish less than 10cm directly behind the cup.

It left the pair separated by one as they stepped to the final tee, an uphill and testing par-3 with a testing short right pin.

Both players were equal to the challenge and knocked stellar shots within 4m of the flag, leaving Kim an uphill birdie try to heap the pressure on her mate.

That putt having been tugged, Gale was left with two of his own for victory.

“It shows me that what I’ve been working on is all worthwhile … I’m really proud to have my game hold up like that with so many great players coming at me.”  Daniel Gale.

He took them both and was clearly delighted to win on home soil, following his previous big pro win in the 2018 Papua New Guinea Open.

“I hadn’t really thought about it until then, but I had a look and saw that Grace was just one back and I knew she’d hit a good one, which she did.

“But I was really happy with the way I dealt with the (overnight) lead throughout the round and how I played my own game.

“It shows me that what I’ve been working on is all worthwhile … I’m really proud to have my game hold up like that with so many great players coming at me.”

Not forgetting Dann (68 to finish -11), the final group made only one bogey all day despite an hour lightning delay before their round and a light drizzle throughout.

Kim, though, was nothing short of sensational.

She played all 36 holes without a blemish on her scorecard and, while obviously disappointed not to have notched a victory, gave an account of herself that belied her years in rounds of 65-66.

“I’m very happy to have played like that,” she said.

“There’s a lot happening here for me this week, so it’s really good that I could do that.”

And on top of her $5300 runner-up cheque, Kim was thrilled to take the $20 off Gale in their side wager.

“Absolutely, that’s what it was all about today,” she joked afterwards.