Kym Olsen often wondered if he could have made it as a professional golfer. For many years life seemed to conspire against it but now, with seven wins in his rookie season on the Australian Legends tour, it seems the bitter-sweet answer to that question might just be yes.

KYM OLSEN OFTEN WONDERED IF HE COULD HAVE MADE IT AS A PROFESSIONAL GOLFER. FOR MANY YEARS LIFE SEEMED TO CONSPIRE AGAINST IT BUT NOW, WITH SEVEN WINS IN HIS ROOKIE SEASON ON THE AUSTRALIAN LEGENDS TOUR, IT SEEMS THE BITTER-SWEET ANSWER TO THAT QUESTION MIGHT JUST BE YES.

There’s no value in it,” says Kym Olsen. “So I try not to think about it.”

The question which prompts this answer is pretty straightforward. Having arrived on the Australian Legends Tour as a complete unknown at the start of the year, 51-year-old Olsen has won seven times. So where has hebeen and why didn’t he turn pro earlier?

“It’s almost been like a comedy of errors except it hasn’t been funny,” he says. “Every time I’ve thought about it seriously there’s been a reason why it just wasn’t possible.

“But I’m definitely enjoying it now and the now is all I try to think about.”

Olsen doesn’t have a tragic tale to tell of being robbed of the opportunity to pursue his dream. In realty, life just kind of got in the way.

“I played for about three years as a junior where I grew up in Crystal Brook, north of Adelaide,” he says. “Then I joined the army at 15 and signed up for nine years. I would have liked to have done a traineeship but they wouldn’t release me, which is understandable.

“Anyway, I got married at 21 and had two kids by the age of 23 so a traineeship wouldn’t have supported that.

“Then I moved to Canada at 24. My wife was from Toronto and she was homesick so we packed up the kids and moved there. You couldn’t even think about golf for six months of the year because of the weather and I was pretty focused on making a living anyway, so I sort of quit golf for a while.”

As career became more important, golf took less and less of a role in Olsen’s life, though it never completely went away.

“I would play sporadically but nothing regular,” he says. “The company I worked for did big construction jobs, shopping malls and hotels and that sort of thing. The work was interesting and kept me busy so I didn’t really think about golf that much.”

In 1988, he was sent to the Turks and Caicos Islands in the Caribbean to oversee a construction project. He ended up staying nine years.

“A friend and I started a company building luxury homes and that sort of thing,” he says. “There wasn’t even a golf course on the island at the time.

“The Sheikh of Qatar built a course a few years after I arrived there and I started playing again. I got pretty good and was invited to play a lot of the national Opens in the area.

“I would often go to South America and play their Opens and I played a bit of mini-tour stuff in Florida to stay sharp as well.

It was also around this time Olsen started thinking seriously about a professional career but once again, fate intervened.

“I was invited to Chile to play their national Open but I was in a car accident while I was there and broke both my wrists,” he says. “That pretty much put paid to golf for a while. I went back to America and got back into construction again.”

Working for a large Canadian firm, Olsen got a taste of some of what he missed out on as a touring professional. “I was on the road 270 nights a year,” he says. “It was interesting but it wears you down. I’m not sure I could go back to doing that again to be honest. It’s much harder work than people think.”

Olsen maintained some game by playing most weeks he was on the road but in 2006, with the help of his wife, he made a big decision. “I decided to semi-retire and come back to live in Australia,” he says. “And spend a year playing amateur golf to see if I could get it out of my system.

“It was really my wife that pushed me to turn pro. I was moping around wondering how good I might have gotten and she just put her foot down and told me it was time to have a go.”

In 2007, Olsen started teeing up in Ivo Whitton events in Victoria and played some mid-amateur events. But again, things were to go awry when he tore a tendon in his right elbow.

“I had to have surgery and only had 30 percent movement left in it,” he says. “Not only was I out of the game for seven or eight months but I had to completely re-build my swing to work around it.”

“I’d be four or five-under after 10 or something and I’d walk off because I just wasn’t into it,” he says.

“Again it was my wife who sorted me out. She told me it was time to try professional golf so I headed up to the Asian Senior Tour and got my card.”

Olsen hasn’t looked back since and even though an unknown quantity among his peers, he easily won the Legends Tour School in January.

Since then he has won in South Australia but it was during the Queensland swing in late July and early August that he really came to prominence, winning six straight events.

“Some of the guys nicknamed me Grey Caviar,” he says with a laugh. “They’ve all been fantastic to me even though they’d never heard of me.

“I couldn’t put a price on what I’ve learnt from the likes of Peter Fowler and Wayne Grady and especially Mike Harwood. He’s been really good and we’ve developed quite a friendship.”

Olsen admits he’s on a steep learning curve and is realistic about where his game, and career, stand.

“I’ve talked to some of the guys and they say they genuinely feel I could play the European Senior Tour,” he says.

“The problem is I’m not sure what I want to do. I missed out on my card last year so there are no guarantees, but even if I got it it’s a difficult decision.

“I don’t want to live on the road for months on end and the schedule is set up in a way that the events are pretty spread out. I’ve decided to put off even thinking about it until the end of the year. I’ll sit down with the wife at the end of the year and we’ll make a decision then.”

In many ways life would have been easier for Olsen if he had bombed badly in his rookie year.

“I turned pro because I didn’t want to get to 55 and wonder ‘what if?’ ” he says. “Now I know the answer to that and it makes it difficult to know what to do next.”

As far as his game is concerned he knows it needs to improve if he is to consistently compete at the top level.

“My short game is coming along but it needs to be a lot better,” he says. “I played with David Merriman earlier in the year and learnt one of my most valuable lessons ever on a golf course. I felt like I outplayed him all day. I hit it past him off the tee, hit it closer with my irons and just generally felt like I had the better day.

“When we added up the numbers he shot 71 and I shot 73. It all came down to the short game and it was the best lesson I have ever had.”

And it hasn’t been the only one.

“I’ve been like a sponge with Mike Harwood and Peter Fowler and Tim Elliott and those guys,” he says. “Every chance I get I play with them and learn something. And I haven’t stopped asking questions either.

“But they’ve all been great. I was a bit nervous at first because I’ve spent so much time out of the country and none of them knew who I was. I thought there might be some resentment, especially after I won a couple of events. But it couldn’t be further from the truth. They’ve all been genuinely happy for me and far more helpful than they need to be.”

The competitive fire still burns strongly in Olsen and it’s difficult to imagine he won’t pursue a card in Europe. In many ways, it’s like he just started a new job and is finding his feet.

“I didn’t start learning the business of being a professional golfer until the day I got my card,” he says. “It’s really not got a lot to do with playing golf.

One can’t help but wonder whether we may have heard of Kym Olsen long before now had he taken those lessons 30 years ago. 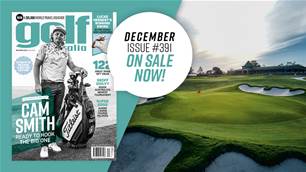