Dustin Johnson started with the lead, matched the low round Sunday score at the Tour Championship with a six-under 64 and now is one round away from capturing the FedExCup and its US$15 million prize.

Johnson missed only three fairways and putted for birdie on all but three holes.

It led to a five-shot lead over Justin Thomas and Xander Schauffele going into the Labor Day finish at East Lake.

"He's showcased what he can do," Schauffele said. "If he does what he normally does, it's going to be almost impossible to catch him."

No one was playing better going into the FedExCup finale and Johnson has shown no signs of slowing.

He was at 19-under par, his fourth consecutive event holding at least a share of the 54-hole lead.

“If he does what he normally does, it's going to be almost impossible to catch him.” – Xander Schauffele

He converted one of those into an 11-shot victory two weeks ago at the TPC Boston.

He lost to a 65 by Collin Morikawa in the US PGA Championship and to a 65-foot putt in a playoff by Jon Rahm last week at Olympia Fields.

Now only four players have a reasonable chance of catching him.

Australians Cameron Smith and Marc Leishman won't be among the quartet considered any hope of chasing down Johnson.

Smith and Leishman both carded rounds of three-over 73 to be in a tie for 24th and 28th place respectively.

The FedExCup has been on Johnson's mind ever since he squandered a great chance to win it in 2016.

He went into the final round that year tied for the lead and then couldn't find a fairway, closing with a 73. 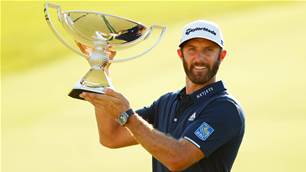 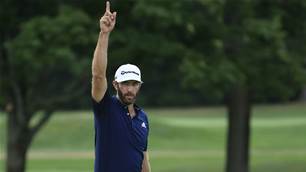