The 148th Open Championship lasted for the usual four days. But the after-match party might take a bit longer.

For a remarkable tenth time since 2007, an Irishman has won a Grand Slam title. But this was different. This one was special. This one was in Ireland, at Royal Portrush. And this one was won by Shane Lowry.

Armed with a four-shot lead standing on the first tee in the final round, Lowry made his way round in 72 strokes, one-over par, amidst weather that alternately veered between unpleasant and unplayable. His playing partner and closest pursuer, Tommy Fleetwood, could manage only a 74. So the winning margin will go down as six shots, Lowry on 15 under par for the 72-holes. Emphatic, especially when no one other than Fleetwood finished within eight shots of the “champion golfer of the year.”

Not surprisingly, Lowry was more than a little excited by the end of what was his eighth Open, the smile on his face extending almost from ear-to-ear. Endlessly and loudly cheered on by a partisan but sporting crowd, he was more than entitled to enjoy the emotion of it all. Lowry takes shelter during a period of heavy rain on Sunday on his way to claiming his maiden major title. PHOTO: Mike Ehrmann/Getty Images.

“I feel like this is an out-of-body experience,” he said after collecting golf’s most famous and iconic trophy, the claret jug, as well as a cheque for US$1,935,000. “I was so unbelievably calm coming down the last. It was so hard out there. I wasn’t doing so well around the turn. But everyone else was struggling too. I just had to focus on staying as far ahead of Tommy as I could.

“I talked a lot to Bo (Martin), my caddie. We have been together since last September, which is just about the time I started to play well again. I couldn’t stop thinking about winning. But that was after only six or seven holes. He was great, talking in my ear. I can’t wait to wake up tomorrow morning and realise what I’ve done. The fans have been unbelievable. The next event I play will seem boring. They were with me all the way and kept me going.”

Indeed, although the final margin of victory will look comfortable enough in the record book, there were inevitably moments of doubt along the way. One came as early as the first hole. Immediately after watching Fleetwood miss from maybe 12-feet for an opening birdie, Lowry holed from ten-feet for a bogey. Had the Englishman holed and the Irishman missed, the lead would have shrunk to only one-shot.

Thereafter, the only moments of crisis were generally self-inflicted – albeit understandable in the conditions. A run of three bogeys in four holes from the 9th reduced Lowry’s lead to four with six to play. But when Fleetwood made a double-bogey six on the 473-yard par-4 14th it was all but over. From there, Lowry cruised home with four closing pars.

“I felt like I played the last five holes incredibly well,” he said, with some justification. “After the 14th is when I started to feel more comfortable. I felt like I was going to do it. when I hit my tee shot on 17. I hit my tee shot there on 18, that was it. It was home and holes then. And I started to enjoy it then. I walked down there and I tried to soak it in as much as I could. It was hard to soak it in because it's very surreal. It's a very surreal experience going down there. Especially with, I'm sure there was a lot of the crowd that wanted me to win today.

“I didn't even know going out this morning if I was good enough to win a major. The people around me really believed that I could, which helped me an awful lot. I did know I was able to put a few days together. I did know I was able to play this golf course. So I just went out there and tried to give my best. And look, I’m a major champion. I can't believe I'm saying that, to be honest.” Indeed, only a year before, Lowry was in such deeper at the state of his game that he sat in the car park at Carnoustie after missing the cut in the 147th Open and cried.

RIGHT: The lone Aussie to make the weekend, Cameron Smith finished in a tie for 20th despite a five over final round. PHOTO: Mike Ehrmann/Getty Images.

“Golf wasn't my friend at the time,” he continued. “It was something that had become very stressful. It was weighing on me and I just didn't like doing it. But what a difference a year makes.”

A little lower down the order – in a tie for 20th place to be exact – the lone Australian subjected to the testing conditions was understandably a little breathless by close of play. Cam Smith’s 76 kept him in red figures – just – and earned him US$91,350.

“That was something I haven't experienced for a while,” he gasped. “It was just brutal. That's all it was. It seemed like you couldn't control your ball no matter how good a strike you had or how good you thought your read was. It was just everywhere. But you never know what golf can throw at you. Sometimes you've just got to hang in there even though it's going the wrong way. I actually made a few good bogeys coming in.”

It was with the effort. With the Presidents Cup at Royal Melbourne looming, Smith will pick up some valuable points in his quest to make the International side captained by Ernie Els.

“That is one of my goals this year,” confirmed Smith. “One of my top things. I had a good run there at the start of the qualifying, but fell away in the middle. But my game is coming back around.”

That is not something everyone in the field can claim. One in particular. J.B. Holmes, playing in the second-last group in the final round, shot 87, dropping from third place into a tie for 67th. Ouch.

All in all then, this was a special week for Ireland and for golf. Almost seven decades after the Open made its first visit to the Emerald Isle, the second can only be classed as an enormous, sell-out success. On this evidence, it won’t be too long before golf’s oldest and most important championship makes its way across the Irish Sea for a third time. A bit less than 68-years anyway. 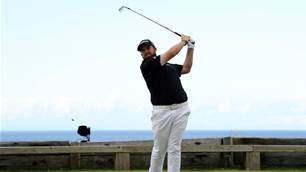