South Africa's Justin Harding is in pole position to claim back-to-back titles on the same course in the space of six days after opening up a three-shot lead in the Kenya Savannah Classic.

Harding won the Kenya Open at Karen Country Club on Sunday and has continued his love affair with the venue by compiling rounds of 64, 66 and 66 to reach 17-under par.

There is a large chasing pack poised behind the 35-year-old, with compatriots Daniel van Tonder and Darren Fichardt, England's Marcus Armitage, Scotland's David Drysdale, Norway's Kristoffer Reitan and Thailand's Jazz Janewattananond all on 14-under.

The leading Australian is Maverick Antcliff, who shot a third round of 68 to sit joint 32nd in the field on nine-under but his compatriot Scott Hend, who was in contention last week, has slipped back to five-under after a 72.

"Justin's obviously doing great and I told him just there to give us all a chance tomorrow." – David Drysdale

"Maybe it's a bit of a surprise to be three clear because I feel like I struggled a bit out there," Harding said after a round containing eight birdies and three bogeys.

"After I bogeyed 14 unnecessarily it was anyone's game, I was just happy with the way I finished (with three birdies in the last four holes) and I just gave myself a chance."

Drysdale is seeking a first European Tour win in his 519th event and kept himself firmly in the hunt with a birdie on the last following dropped shots on the 15th and 16th in his 69.

"Justin's obviously doing great and I told him just there to give us all a chance tomorrow," Drysdale said. 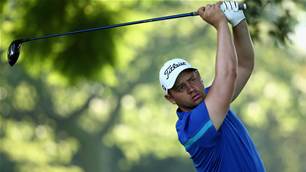