It’s Thursday; Day One of the Presidents Cup at Royal Melbourne. 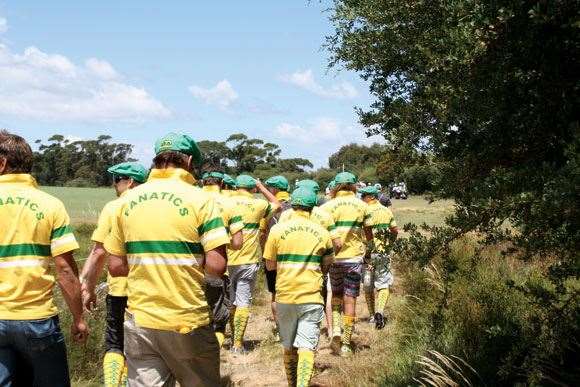 It’s Thursday; Day One of the Presidents Cup at Royal Melbourne.

Crowds line the length of the first fairway, five and six deep, standing on tippy-toes to see the Amazing Men Of Golf. The Presidents Cup - as the mayor of Parkes says of pretzels in The Dish - is “a world event”. These players are golf’s Super Men. They’re the elite, the top golden bricks of a pyramid with base the size of Queensland. To be this good at golf, the most difficult of Earth’s sports, you have to be committed like a head-banging zealot. From the age of 12 you will know not of movies, skateboards, women, beer nor the capital of Nigeria.

There’s Ernie Els, an over-sized human with soft hands and the rhythm of Gershwin. He’s an Honourary Aussie this week like Botham or Nicklaus or pavlova. Els’ golf swing is so languid and powerful, it’s like Tony Lockett pulling off a perfect waltz; like an act of sexual congress between two giant sloths. It’s a very fine golf swing.

We follow Ryo Ishikawa with a couple of dozen Japanese media types who stalk the wunderkind around the world. Alas, our Ryo – the heartthrob with the tight buns, good skin and clear gaze of a Manga comic hero called Golf Boy – is playing like a dud. He’s attracted a torrent of criticism for only turning up on Tuesday for his first tilt at Sandbelt golf, much less Royal Melbourne’s “composite” course, rated the world’s eighth best. Still, he doesn’t look like he gives a shit.

On the par-three third, Ishikawa is short of the green by a good 30 metres. Els’ recovery (they’re playing alternate shot “foursomes” against Bubba Watson and Webb Simpson) is a master-stroke, scooting up past the flag to the back of the green, then slowly rolling and rolling towards the flag, settling to tap-in.

The greens are quicker than laser-skates from the future. They’re hard, black and baked; rolled into a bowling-alley sheen. They appear to be of marble. If they were out on the MCG’s centre wicket, it’d be a juicy, seaming green-top. For golf, the Stimpmeter is off the charts.

There’s Watson on the tee, a big chunk of Bagdad (in Florida), who smashes the bejeezus out of it, finishing with a flourish at the top end; like a wristy whip, a matador’s killing stroke. It’s exciting, funky stuff, and the ball soars into the ether like a flaming comet.

On the seventh, Watson loads up with his giant pink whacking stick and tries to cut the ears off the dog-leg left. The ball goes straight at a group of Melburnians who duck like they’re being attacked by a malignant magpie. A security man strides out to find Watson’s ball, eager to complete this Important Task, arms slightly wide, sports watch chunky, fingers twitching itchy like a gun-slinger. He probably wishes he did have a gun just in case any of these golf fans get rowdy and he could shoot them. Security types are so often like this; there should be a study: what does it do to a man when he’s given an ear-piece and Batman’s utility belt?

On the ninth, Simpson hits out of a fairway bunker from 180m and lands his ball a metre from the hole. It’s an unbelievable golf shot for anyone above a handicap of about two. Pure and at the flag, a five-iron, clipped off the sand with the fluency and timing of Mark Waugh lofting over mid-wicket. Some shot.

Shark sighting! It’s the Great White Shark, Greg Norman, with his slim, snaky hips and bull-shooter’s eyes and Nordic shock of blond hair. In his wisdom, Shark has brought the Fanatics with him, literally renting a crowd by shouting them tickets. Shark wants Lleyton-at-the-tennis “atmosphere”. Yeah ...

And so to lunch and we’re into the massive Media Tent for shop-talk with the reptiles. Coming into the Cup, I had half an idea I could be like Hunter S. Thompson going “gonzo” at the Kentucky Derby, getting loaded up on amyl and roving around the place, all-access. But any sign of aberrant or even just off-kilter behaviour could literally get you killed. There are men here with guns and a mandate, particularly around Shark and Tiger. Rub against the grain and you could be black-banned forever, put on an international shit-list. The larrikin is dead, replaced by bomb threats. Good one, Osama. Prick. 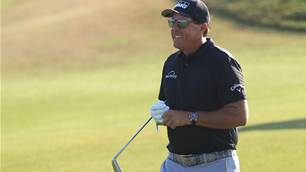 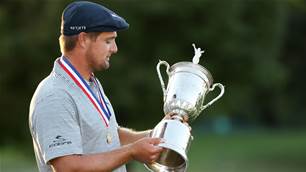