Marcus Fraser's dream campaign in Rio continues, despite his lead being trimmed to a single stroke at the halfway stage of the men’s Olympic tournament.

The Victorian came back to the field with two back nine bogies, but a birdie at the 18th hole saw him sign for a two under 69 to add to his record setting opening round of 63 to reach 10 under after 36 holes.

Belgium’s Thomas Pieters carded a five under 66 to move to nine under, one stroke back of Fraser, while Open Champion Henrik Stenson is lurking two shots off the pace after a three under 68. Frenchman Gregory Bourdy (69) and England’s Justin Rose (69) are a further strokes back at six under and currently tied for fourth. 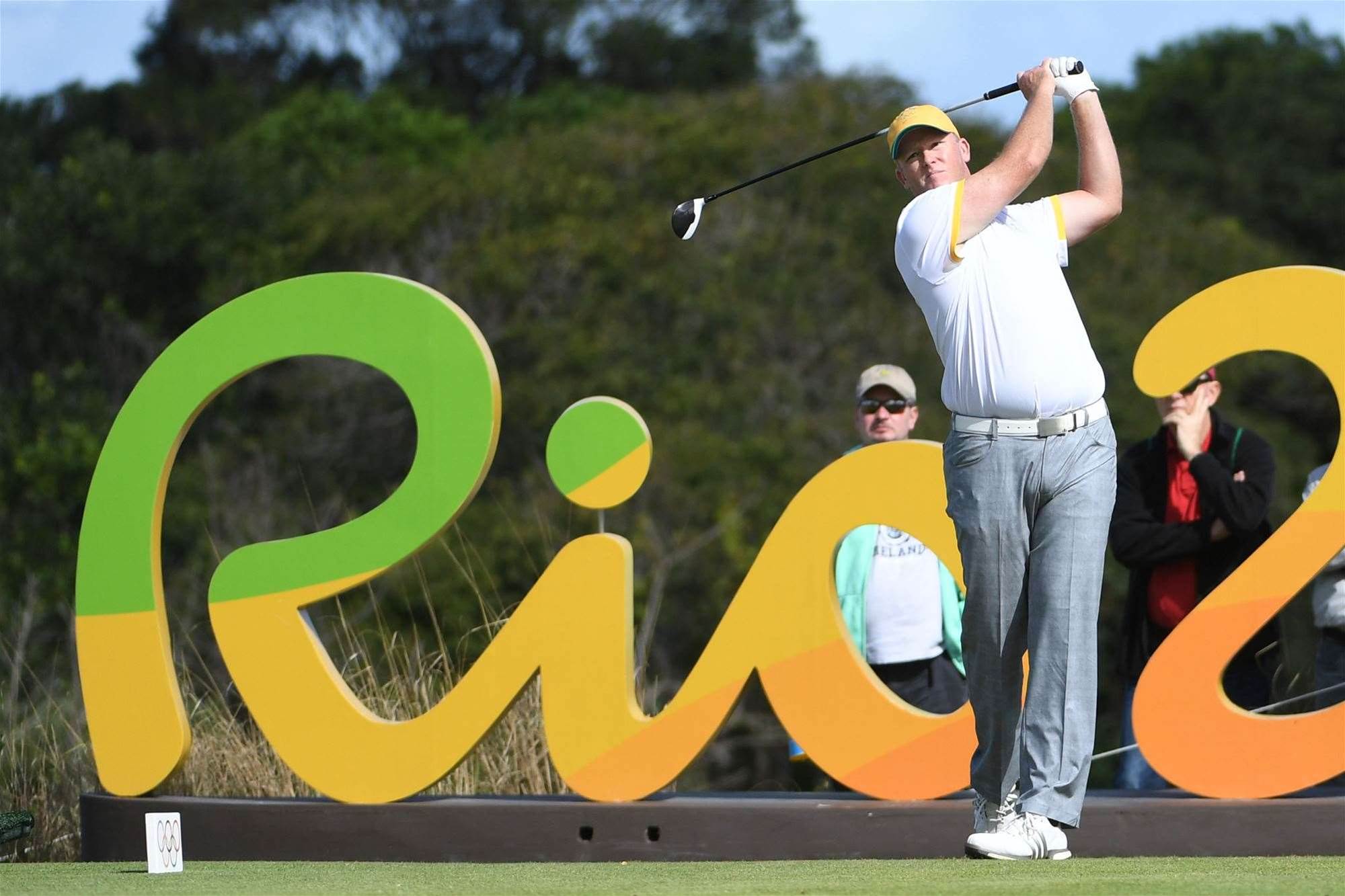 Marcus Fraser has been supremely accurate from the tee during the first two rounds. PHOTO: Getty Images.

But Fraser, who started his Olympic campaign as a 100/1 shot to win a medal, continues to successfully plot his way around the Marapendi, picking off birdies with pinpoint iron play and a putter that rarely, if ever, lets him down.

Not even on this second day where he had six genuine birdie chances either lip out or burn the edge of the cup. The day before every out seemed to drop.

“I felt like I putted very similar to yesterday,” Fraser said. “Just the ball found a way to avoid the holes. But that's golf. That's the way it goes some days.

“Overall, I felt really comfortable out there. It's always hard to back up a score like 63, but I felt like, two-under 69 is a good effort after yesterday.”

Fraser quickly moved to 10 under with birdies at the 3rd and 5th holes, where his wedge approach almost went in the hole before stopping less than two feet from the flag.

After a narrow miss for birdie at the par-5 10th, the 38-year-old set up an easier birdie attempt at the next when his approach from 215 yards settled just five feet from the flag and he easily converted his chance to move to 11 under.

But a misjudged iron approach on the long par-4 12th led to his second bogey of the event, and he added a third with a poor pitch at the driveable par-4 16th. There, Fraser’s second shot from just 40 yards didn’t quite reach the putting surface and rolled back down a steep slope. Ensuring he wouldn’t repeat the error, he pitched to 15 feet but missed the par-saving putt, which saw him drop back into a share of the lead with Pieters.

But Fraser was not done. An outstanding chip to tap-in distance at the par-5 closing hole added another birdie to his scorecard and he was in the house at 10 under and leading again.

Fraser is looking forward to the prospect of playing the third round alongside the big-hitting duo of Pieters and Stenson and says he won’t be intimidated by their power game.

“Well, it's fine,” Fraser laughed, “because I probably will feel like I'm playing on my own because they will be about a hundred meters in front of me.

“It's fine. Those guys have completely different games and bigger games to what I have, but at the end of the day, we play 72 holes and we hit a certain amount of shots on each hole. There's more than one way to skin a cat, if you want to say it that way.

“We play a game, I think the best game in the world, and it will be good fun out there with those guys. Any time you get to play with Stenson on the weekend, you know you're doing something right.”

And keeping him heading in the right direction is his best mate, Jason Wallis, who jumped at the opportunity to caddy for Fraser when he his regular bag man was not available.

Wallis, a former professional golfer who grew up with Fraser in the Murray River town of Corowa, is on annual leave from his signwriting job to carry Fraser’s bag and, perhaps, witness his mate make golfing history.

“We've known each other since we were kids … ten years old,” Fraser said. “He used to be a professional golfer. He's not anymore but we've been good mates for a long time.

“He still strikes it pretty good. He's still a scratch golfer himself, even though he plays about five times a year. He's a pretty handy golfer.

"Having my best mate there on my bag to have a chat to and laugh with, and laugh at, it's been good fun … we're really having a great time out there." Queensland’s Scott Hend moved up 13 spots on the leaderboard with a two under 69 to be one over par after two rounds. Having carded a disastrous quintuple-bogey 10 on the 10th hole in the opening round, Hend took his revenge in round two, making a birdie

A frustrated Hend, who rued a 10 on the par-five 10th to card a 74 on Thursday, managed to easily birdie the same hole in his second round.

"I'm playing really well but just a couple of little mistakes are letting me down," he said.

The man the entire golfing world expects will have a gold medal hanging from around his neck on Sunday night is Stenson. The Swede is well poised to make a run but his ball-striking needs some polish to reach the high standard he set with his win at the Open Championship.

The 40-year-old birdied the opening two holes and appeared certain to seize control of the tournament. But a wild tee shot left into a hazard at the 3rd seemed to dent his confidence. While he escaped with a miraculous par on the 3rd, after holing a putt from 108 feet for par, Stenson made a soft bogey from a greenside bunker at the par-3 next hole. 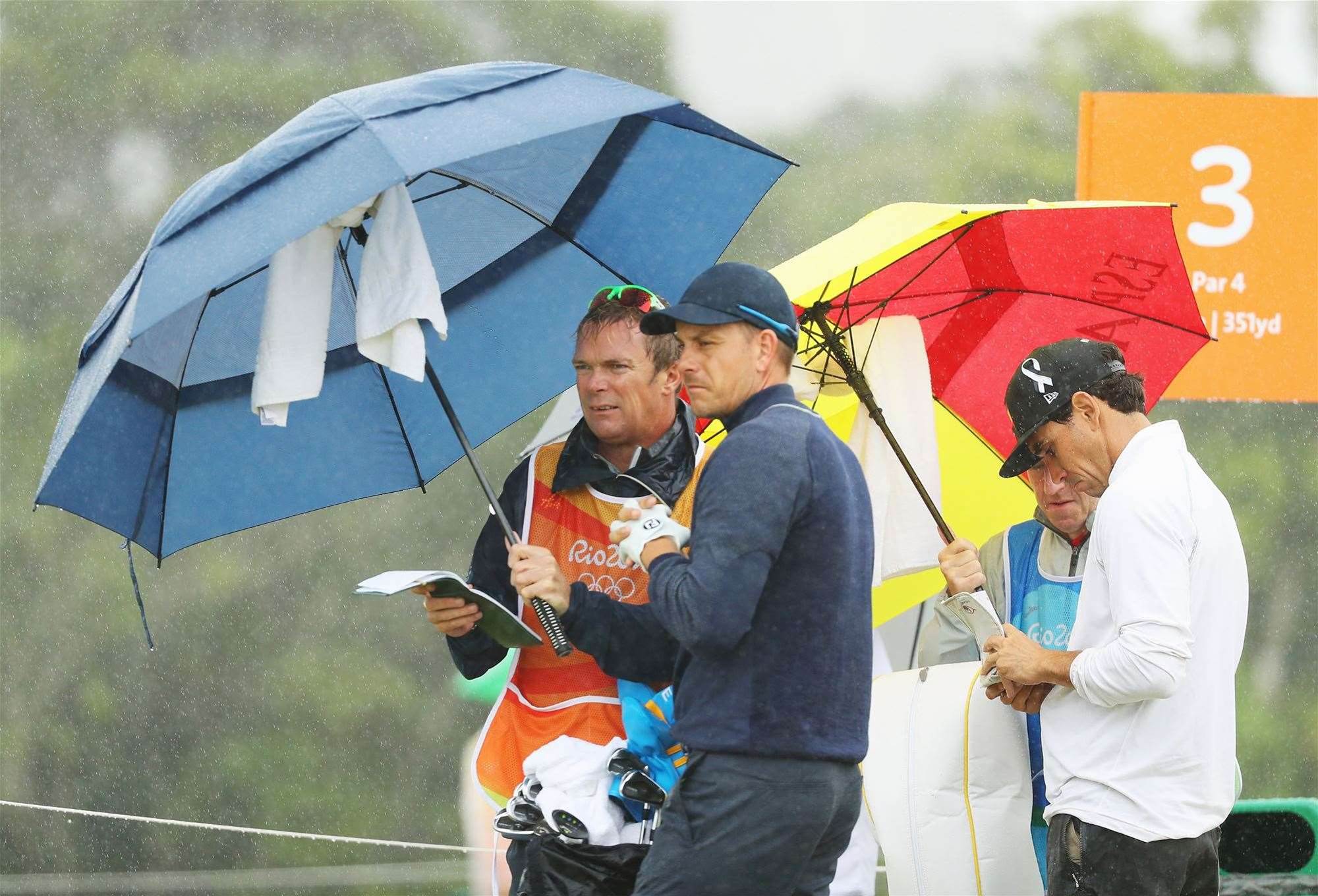 Henrik Stenson shelters from the rain that swpt across the Olympic course early in the day. PHOTO: Getty Images.

His struggles with the par-3s continued on the back nine when he three-putted for bogey on the 14th and again, couldn’t get up-and-down from the sand, at the short 17th. Mixed between these two late bogies were three birdies … all made with a single putt, no longer than six feet.

“There's a lot of golf still to play,” Stenson said. “I always prefer to be two ahead than two behind. If you're not there at the halfway turn, you've got more to make up for the next two rounds.

“But 36 holes, if you're playing good, you can obviously makeup quite a few shots. Yeah, happy with the first two days.”

The ice-cool Swede says he’s not feeling any nerves at the moment but expects that will change come Sunday.

“It's another golf tournament … I saw the remarks that some guys were more nervous walking here. I actually felt kind of opposite,” Stenson said.

“I don't know if it was because I was pretty clear on my game and what I was going to do. I felt less butterflies walking to the tee box than at some other events.

“We'll see; I'm sure that will change if you've got a Gold Medal on the line on Sunday afternoon. I'm sure there might be one little one.” 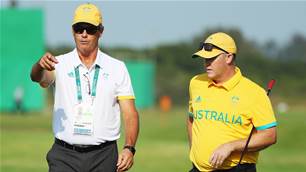