Aileen Greenfield and Gene Elliott triumphed in the R&A Senior Amateur Championships that were played at Ganton and Ashridge.

After a trio of near misses, Elliott finally found success in the R&A Senior Amateur Championship as the Iowa native placed both hands on the trophy that had proved so elusive over the past three championships.

Elliott lost in a play-off to countryman Craig Davis at North Berwick in 2019, the last time the championship was played. The 59-year-old was third in 2018 and joint second in 2017 on his debut.

The 59-year-old began the final round one shot behind England’s Andrew Woodhead, with whom he was playing. He soon took charge when he birdied the first hole while the Englishman, who placed joint fourth, made double-bogey. An eagle at the par-4 3rd hole took Elliott to three-under-par for the round and in charge of the tournament on three-over-par.

The 285th player on the World Amateur Golf Ranking, the best ranked player in the field, looked in complete control through the next 10 holes. He made nine pars and a birdie at the par-3, 10th hole. That’s when gritty Ganton Golf Club began to bite back.

Elliott dropped three straight shots at the 14th, 15th and 16th holes. He looked like dropping another when he missed the 17th green to the right with a hybrid but made a great up-and-down to take a one-shot lead down the last. He made a closing par to seal the win.

“I rode the wave of emotions today,” Elliott said. “I felt comfortable until I shanked a 5-iron off the 14th tee and made bogey. I bogeyed the next two and the wheels were coming off, actually they were almost bouncing along beside me down the fairway. But I made a great up-and-down at 17, hitting the best putt I made all week to save par. I knew I needed to two-putt from 20 feet at the last to win, which I did but it isn’t always the easiest thing to do under pressure.”

The two-time Canadian Senior Amateur champion (2017 and 2019) was just one of two US players to make the trip to Ganton for this year’s championship along with Walker Taylor, who missed the cut. Covid-19 protocols meant Elliott had to quarantine upon arrival in the UK. He and wife Dalena spent five days in a London hotel, only being allowed out to get tested. It didn’t help his preparation for the tough test Ganton presented the over 55s, but it made getting his hands on the trophy all the sweeter.

“This is the hardest I’ve had to work to play in a tournament let alone do well, and it wasn’t work practising. I spent five days in isolation before this championship only leaving the hotel to get tested. Now I need another couple of days rest, not quarantining, to let this sink in," Elliott said.

“This win is up there with the best I’ve ever done. I value golf over here, and what The R&A does to put on this event. It means a lot to win this great championship.”

Dalena caddied for her husband all week and, unsurprisingly, the champion had nothing but praise for his caddie.

“She was already wife of the year for doing the quarantining with me to let me play here and, as well as she caddied, I owe her big time,” Elliott said.

It is the 23rd time the championship has been won by an American and the 19th time in the last 24 championships.

Elliott has a week off before travelling to Sunningdale to compete in the Senior Open presented by Rolex. He’ll arrive there as Senior Amateur champion.

Greenfield enjoyed the highlight of her career with a dramatic play-off victory over Catherine Rawthore in the R&A Women’s Senior Amateur Championship. Behind all the way in the final round, the Pyecombe golfer holed from five feet for a birdie at the par-5 18th to force the extra time and a par at the opening hole of sudden death, the 10th, sealed the title.

In extra time, both players were on the green in two, but Rawthore three-putted from 45 feet while Greenfield two-putted for a solid par four.

The emotional new champion was close to tears as she hugged husband-come-caddie, Trevor, and she admitted she was absolutely thrilled to have lifted the prestigious trophy that earns an invitation to the US Senior Women’s Amateur Championship in Alabama in September.

“Today I was so nervous and started really badly,” said the Sussex player. “But my putting was much better than yesterday. I actually never knew what the position was, or how far I was behind. I told Trevor not to tell me, so it was a bit of a surprise to get into a play-off. It was a good day and this is definitely my biggest win and it completes a nice treble.”

A victor in both the English Stroke and Match Play Seniors championships, Greenfield started the final round two shots behind playing partners, Rawthore and Jackie Foster.

A drive into the deep, tangly rough, a drop-out under penalty and a double-bogey six at the 1st was not the start of a champion to be, but she doggedly fought back and birdies at the 13th and 18th helped secure her place in the extra hole decider.

Rawthore, the 2014 champion at Royal Dornoch, closed with a 79, and was desperately disappointed with her form in the play-off where she hit her opening putt six feet past the hole.

“I had been short before but just gave it too much,” said the Sale woman. “This year, it was not to be, but Aileen played really well and she is a great winner.”

But the most powerful of the top trio, her accuracy from the tee disappeared over the crucial final stretch. She finished with a third round 81, still good enough to secure third place on 12-over-par.

Foster’s troubles started when she dropped shots at four holes in a row from the 9th, and after a brief respite with a birdie at the 13th, she had a damaging double-bogey at the 14th and shed more shots at the 15th and 18th.

“My driving just went and you can’t do anything out of the rough here. It’s so tough,” lamented the Hertfordshire golfer. “It was a shame because I was driving so well in the first two rounds." 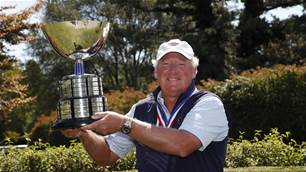 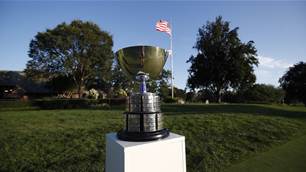