Deyen Lawson – "or "Digger" as everyone in Australian golf knows him – is a 1,000-1 outsider to win The Open in his debut major, but there's no harm in the big man dreaming big at the venue which 18 years ago delivered one of the game's most improbable winners.

For it was at Royal St George's in 2003 that Ben Curtis, a supposed 500-1 no-hoper from Ohio ranked 396th in the world, upstaged Tiger Woods et al to record a victory that stupefied everyone, not least himself.

Curtis, the first since Francis Ouimet in the 1913 US Open to win his debut major, retired three years ago at the age of 41 but his name stands as an inspiration to any hard-working golfer with a bit of self-belief and the capacity to dream at the most capricious of the four majors.

Lawson, at 30, is one of the dreamers. Currently No.633 in the world, making his debut in the majors and rated by British bookmakers as being twice as unlikely to win the 149th edition of The Open as Curtis was to win the 132nd, the man from Geelong insists he's not here just to take in the sea air.

"It could be a good few weeks for Australia – Cam Davis (winning on the PGA Tour in Detroit), Ash Barty at Wimbledon, Min Woo Lee and Lucas Herbert (winning on the European Tour) ... I'd like to add to that little lot, that'd be great," Lawson told AAP.

He booked his dream Open place by winning a 36-hole final qualifying event in Kent down the road from Royal St George's just over a fortnight ago to complete "a goal I've had since I was a little kid."

It was a boost almost out of nowhere for a journeyman who largely competes on the second-tier Challenge Tour in Europe but hasn't made any waves of late.

"It could be a good few weeks for Australia – Cam Davis (winning on the PGA Tour in Detroit), Ash Barty at Wimbledon, Min Woo Lee and Lucas Herbert (winning on the European Tour) ... I'd like to add to that little lot, that'd be great." – Deyen Lawson

Asked if there were times when he felt like quitting during his long slog to make his name in European golf, the likeable Lawson smiled: "Yeah, about four weeks ago! I do love travel but I do miss not being able to go home.

"It's really been a battle through the middle of the year. I haven't been home for a few months now and probably won't until November – I'm not sure if I can even go back then to be honest.

"To be playing my first major has made it a little bit sweeter to make up for all the sort of heartache you go through. It's come at a really good time for me.

"My ambitions? I'd love to be top 50 in the world, to play on the European Tour and work towards the PGA Tour, play in the majors. Pretty much what Jason (Day) does."

On Tuesday, Lawson practised with his illustrious compatriot Day for the first time here.

"He was a lot of fun, we had some good laughs – but then when he's hitting his shot, there's this 15, 20 seconds when he suddenly goes into the zone. Obviously there's a reason why he's been No 1 in the world ..."

Like everyone else, Day took to 'Digger'. "A couple of my brothers' mates started calling me Digger at school and it sort of caught on. Now the only people who call me Deyen are my fiancee and my mum!

"I feel like I'm just a little baby with golf. It's only my fifth or sixth year full-time playing, so I feel my next five, 10 years are probably going to be my best years." 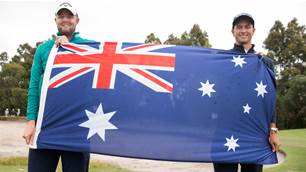