A resurgent Jason Day is fired up for the looming US Open and Masters having sniffed a second career major victory with a hot finish at the US PGA Championship.

The former World No.1 continued his return to form with a tie for fourth – three shots behind US PGA champion Collin Morikawa – at San Francisco's TPC Harding Park to record his 10th top-five result in 38 major starts.

The 23-year-old Morikawa, playing just his second major, shot a 64 for a 13-under-par total and a two-stroke win from England veteran Paul Casey (66) and overnight leader Dustin Johnson (68).

Day posted three consecutive top-10s on the PGA Tour leading into the US PGA Championship and has clawed back up the world rankings to No.32.

The 32-year-old is champing at the bit to continue his bid for a second major, which he will do at September's US Open at Winged Foot in New York and the Masters at Augusta National in November.

"I can't wait to play these next two majors now," Day told AAP after his round.

"The US Open is the most testing major and I love that, but the Masters is my favourite event and one I really want to win. It's exciting."

“I can't wait to play these next two majors now.” – Jason Day

Although no fans were in attendance, the US PGA saw one of the most dramatic finishes to a major championship in recent memory.

A whopping seven players were tied for the lead late in the round before Morikawa chipped in for birdie at the 14th to break the stalemate.

A stunning eagle at the 16th set up a cruisy victory.

But Morikawa took the first major of 2020 by the scruff of the neck.

"It was really cool to be able to be in contention again at a major on Sunday," Day told reporters.

"It's just nice to be able to know my game can handle the pressure of trying to win a major championship.

"There's still a lot more to improve on but if my putter gets hot, I'm going to win pretty soon.

Day's countryman Adam Scott signed off with a solid 68 to share 20th at four under, while fellow Queenslander Cameron Smith (70) finished at even-par. 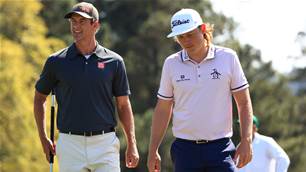