Missing the cut in his first tournament of 2021 wasn’t how C.T. Pan planned on starting the New Year. But despite that, the Chinese Taipei golf star is still in a far happier place now compared to some 12 months ago.

If the script had played out the way he envisaged early last year, Pan would have been riding on the crest of a wave following an impressive Presidents Cup debut in December 2019, where he won two of his three matches for the International Team at Royal Melbourne Golf Club.

The 29-year-old said he left Australia as a “better golfer,” but a combination of illness, golf’s enforced shutdown due to COVID-19 and losing his golf swing made it pretty much a year to forget before salvaging 2020 with a tie for seventh in his first Masters Tournament appearance last November.

Fully healthy and swinging freely once more, Pan, who is featuring in The American Express at PGA West (Stadium) in La Quinta, California this week, is eager to make up for lost time despite his false start at the Sony Open in Hawaii last week, where he missed weekend play by one shot.

“There are a lot of positive things, no doubt,” Pan said. “I’m definitely looking forward to 2021 especially with a new mentality. (Last year) was a tough year. After you struggle, you feel everything opens up. … Your mentality is better and you have a different perspective of the game. I think it will help me moving forward.”

Pan came down with the flu after a bittersweet Presidents Cup debut – the International Team suffered a narrow 16-14 loss to the US Team – and it knocked him out for nearly a month, forcing him to withdraw from the winner’s only Sentry Tournament of Champions in Hawaii in January, which he secured his place after winning the RBC Heritage in April 2019.

“It goes back to right after the Presidents Cup where I played really well there. The whole week, when I would hit a shot, I never imagined I could hit those type of shots but I still did it because I had to (for the team). Being able to accomplish that meant I had become a better golfer,” Pan said.

“But after that, I got sick. I was coughing every night for nearly 20 days and it affected my sleep and my body didn’t get the rest which I needed in between seasons,” he continued. “It really snowballed and it was pretty severe. Between flying back to Taipei and the US, the jetlag didn’t help and I didn’t recover. I was disappointed to miss the Sentry Tournament of Champions as my wife (Michelle) and I were meant to get there on December 27, celebrate our wedding anniversary the next day before playing play in the tournament. I’ve always wanted to play there.”

“I’m definitely looking forward to 2021 especially with a new mentality. (Last year) was a tough year. After you struggle, you feel everything opens up. … Your mentality is better and you have a different perspective of the game.” – C.T. Pan

With poor health hampering his practice time and preparation, Pan’s subsequent return to PGA Tour life led to four missed cuts from five starts during the first quarter of 2020. Then, the coronavirus pandemic shut down all sports leagues in mid-March and by the time the Tour resumed play in June, Pan’s golf swing was in such disarray that he would go on to miss four more cuts over nine remaining starts, with a best finish of T44 coming in mid-July at the Memorial Tournament presented by Nationwide.

“Technically, I lost the foundation of my golf swing,” Pan said. “I couldn’t find a way to hit the ball even though I tried to go back to my fundamentals. I couldn’t get it back and this doesn’t happen to me often. I struggled with my long game and my putting was a struggle too which isn’t a good combo.

“It was only last August that I finally found the reason why I couldn’t play well,” he added. “It was an issue with my posture where my back was slumping, which meant I was using more arms with my backswing instead of rotating with the body. It was a quick fix and by the time the new (2020-21) season started in September, I felt better with my swing and worked really hard to get it back to where I was comfortable hitting the ball and solved my putting stroke too.”

He ended the year on a strong note following that memorable top-10 at Augusta National Golf Club, which was the best finish by a Chinese Taipei golfer at the fabled event. “I had such a great performance and the top-10 finish meant a lot as it was a struggling year for me,” Pan said.

Though speed and power are all the talk on Tour these days, Pan does not plan to join the race to gain more distance. A relatively short hitter, Pan reckons he can find more success with his tried-and-tested style of play, which is finding fairways and greens in regulation.

“Watching someone like Bryson (DeChambeau) hitting balls at the range, it’s so entertaining and it’s a great skill for him to be able do that. I can’t imagine how many hours of practice on and off the golf course he’s had to do to get to where he is, and also the data analytics behind it all,” said Pan, who currently ranks a lowly 150th in Driving Distance this season with an average 292.5 yards, or 267 meters.

“I wish I (could) do it, but physically, I’ve got a small frame and it’s impossible to do so,” he said. “I’ll stick to my plan, just keep to the traditional game and play the golf course, work on my short game and putting which I need to win a golf tournament again.” 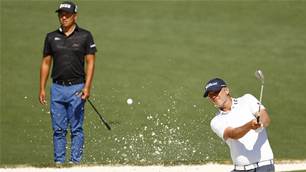 Pan plans to stick to sandwiches & sightseeing at the Masters