The 35-year-old called on all his experience to remain patient and seemingly nerveless under fire as some of golf’s biggest names including Tiger Woods, Rory McIlroy and Jordan Spieth tried to match it with him over the closing stages at Carnoustie.

It was a dramatic afternoon where the result hung in the balance on every shot. At one stage, seven players shared the lead and there were 11 players within two strokes.

Woods turned back the clock nearly a decade as he assumed the top spot on the leaderboard for the first time in nine years at a major championship. With eight holes to play, the 14-time major champion appeared to be the man to beat. Two bad swings later – a bad tee shot into the rough on 11, compounded by a hooked approach that left him a near impossible chip – and Tiger was taking a double bogey. He couldn’t add to a birdie on the par-5 14th and ultimately posted an even par 71 to finish five under and tied for sixth. 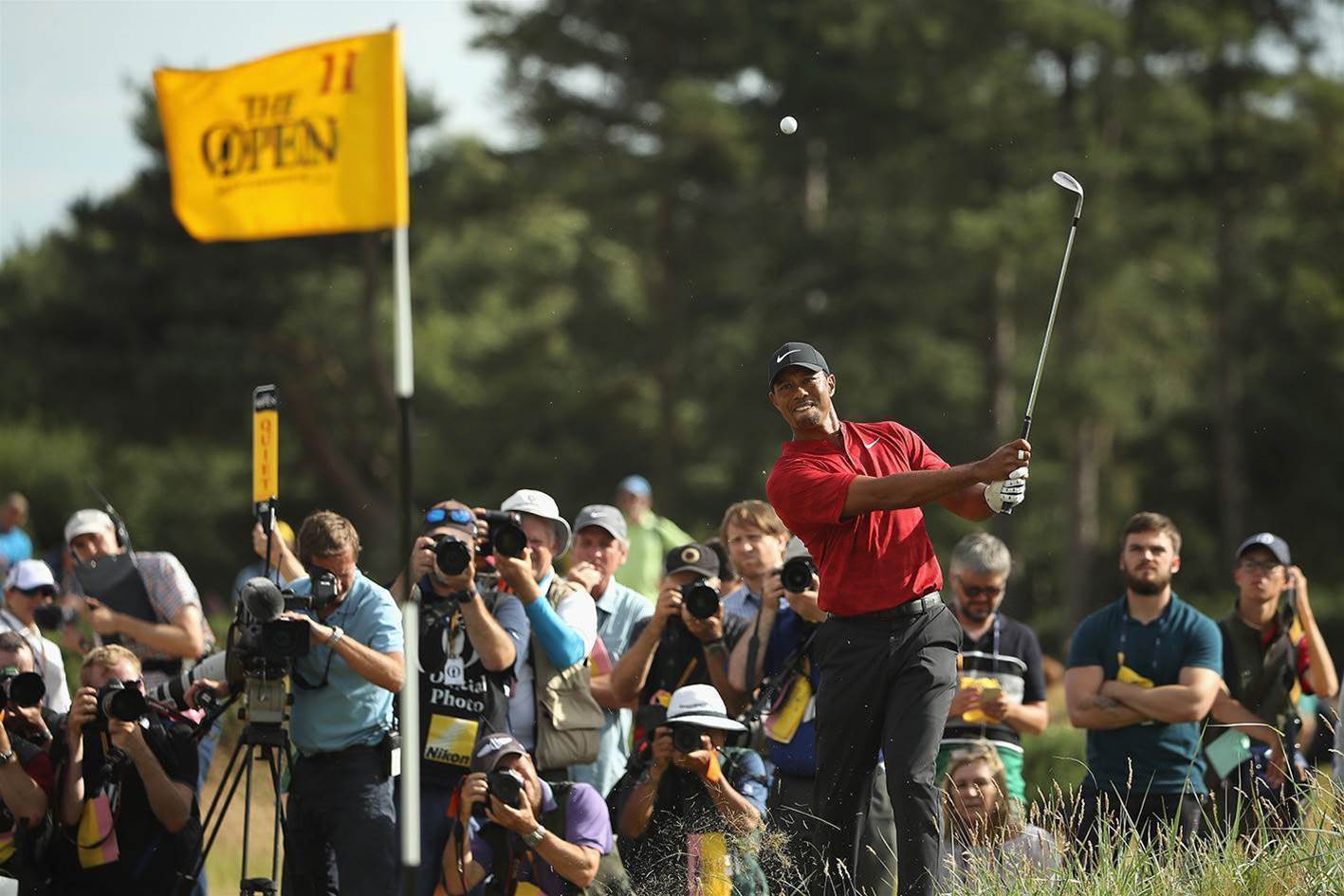 The beginning of the end of Tiger Woods run at the title. PHOTO: Getty Images.

Spieth still had a share of the lead early on the back nine despite turning in 39 and failing to make a birdie. He didn’t find any birdies on the inward half either and signed for a five over 76 ­– his worst Open score since the third round of the 2013 championship at Muirfield.

McIlroy entered the frame when he eagled the 14th to move to six under and into a share of the lead. But, like Woods and so many others on the final day at Carnoustie, he couldn’t find another birdie in the closing quartet of holes. Rory McIlroy's eagle on the 14th put him in the frame but he couldn't catch Molinari. PHOTO: Getty Images.

Xander Shauffele had his chance to send the Open into overtime and continue the American run of five major victories. He was seven under standing on the 17th tee, with Molinari in the clubhouse at eight under. The 24-year-old found the fairway from the tee but skewed his long iron approach well right and was left with a tough pitch. The resulting bogey left him needing to hole his approach on the par-4 18th. He didn’t and he finished tied second alongside Justin Rose, McIlroy and countryman Kevin Kisner, who led this championship after each round except the one that matters most. Jordan Spieth laments a bogey on the 15th hole that saw him drop from contention. PHOTO: Getty Images.

With all the drama that filled the final two and a half hours of the championship, the only man at Carnoustie not to blink was Molinari, who appeared oblivious to the pressure of becoming Italy’s first-ever major champion.

His lead was just one when he reached the 18th tee, which has a well-known history of breaking hearts at the Open. He pulled the driver and smashed it nearly 380 yards down the hard-baked fairway, and followed with a wedge to just five feet. He converted the birdie for a two under 69 and eight under total.

Woods, his playing partner, was the first to congratulate him but the celebration was slightly subdued knowing there were still four players out on the course who could still tie. Francesco Molinari punches the air after making birdie at the 18th to go to eight under. PHOTO: Getty Images.

After signing his card, Molinari was filmed in a room near the scorer’s area. He looked like he was in a doctor’s surgery waiting for bad news. To take his mind off things, he ventured out to the practice putting green.

“I couldn't watch Xander play the last two holes, to be honest,” Molinari said. “That's why I went to the putting green because I probably would have felt sick watching on TV.

“So big credit to my wife that watches me all the time. I don't know how she does it. I couldn't do it.”

GALLERY: 50 BEST IMAGES FROM THE FINAL ROUND

After the agonising wait, came the realisation …he’d won.

“It's just disbelief. Like I said, to look at the names on that Claret Jug, obviously, what can you say?” Molinari said. “It's the best golfers in history, and to be on there, it's incredible.

“From someone like me coming from Italy, not really a major golfing country, it's been an incredible journey.” Whenever Molinari appeared to be in trouble he played nerveless golf to get back on track. PHOTO: Getty Images.

The most incredible aspect of Molinari’s journey, on reflection, could be the final 37 holes of the championship, which he played bogey free and, on a course, he had avoided for years after being “beaten up” by it.

“To be completely honest, one of the reasons why I didn't play the Dunhill Links in the last few years because I got beaten up around here a few times already in the past,” he said.

“I didn't particularly enjoy that feeling. It's a really tough course. You can try and play smart golf, but some shots, you just have to hit it straight. There's no way around it. You can't really hide.

“It's a beast of a course. So I don't think anyone feels too confident when they stand on that 1st tee at Carnoustie.

“I'm lost for words really. Incredible to do something like this, and very proud of what I've done.

“To play the weekend bogey free around here, obviously, I had done it at Wentworth for my win earlier this year, but to do it around here, it's even more impressive.”

This victory continues his incredible run of form since winning the BMW PGA Championship at Wentworth in May. Since then he has won three times and been runner-up twice and, as a result, he will move to World No.6 when the ranking is officially published tomorrow.