Austin Cook and Talor Gooch have shot eight-under-par 64s to take the first round lead at the Houston Open.

Cook shot a career-best 29 on the front side, the 28-year-old from Arkansas returning to the clubhouse having hit every one of the 18 greens in regulation.

"It's definitely nice to get out and have a great round in the first round," he said before expressing frustration with recent missed cuts because of "iffy ball-striking" and far too many low scores around him.

"A few of (the missed cuts) were by one shot. Last week (the cut in Las Vegas) went to five-under. I wasn't expecting that."

The PGA Tour has returned to the Houston area after an 18-month hiatus without much star power – the highest-ranked player in the field is Sweden's Henrik Stenson at World No. 37 – but plenty of good play.

There were 13 players under par by at least five shots on Thursday. Gooch matched Cook stroke for stroke and tied the low round of his career with 10 birdies and he also saved one of his pars with a career-long putt of more than 63 feet.

"Any time you have double-digit birdies you're doing something right," he said.

"I drove it well, got the ball in the fairway, hit a lot of good iron shots and was able to make a few putts. It was a fun day."

Cook and Gooch hold a one-stroke lead over Sepp Straka. The 26-year-old Austrian's 65 included a run of four successive birdies after he turned the corner.

Russell Henley, Lanto Griffin and Tyler McCumber are lurking after six-under 66s and the five-man group at 67 includes 20-year-old Houstonian Cole Hammer, the second-ranked amateur in the world.

Zhang Xinjun of China was the only afternoon starter to shoot at least five-under with conditions becoming breezier because of an approaching cold front.

Two-time runner-up Stenson has eight strokes to make up and is in danger of missing the cut after his round of 72.

Victorian Aaron Baddeley also shot an even-par round and is the best-placed Australian at T75th. 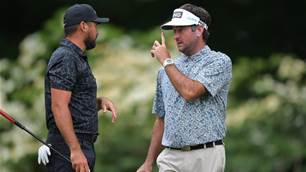