Brady Watt emanated everything about the Sandbelt Invitational at Kingston Heath on Monday.

Sporting a white bucket hat, carrying his oversized water bottle and sand bucket in hand, with his caddie shouldering a single strap Jones golf bag, the West Australian looked to have the round one lead sewn up after an up-and-down par at the last. The former World No.1 amateur signing for a five-under-par 67. 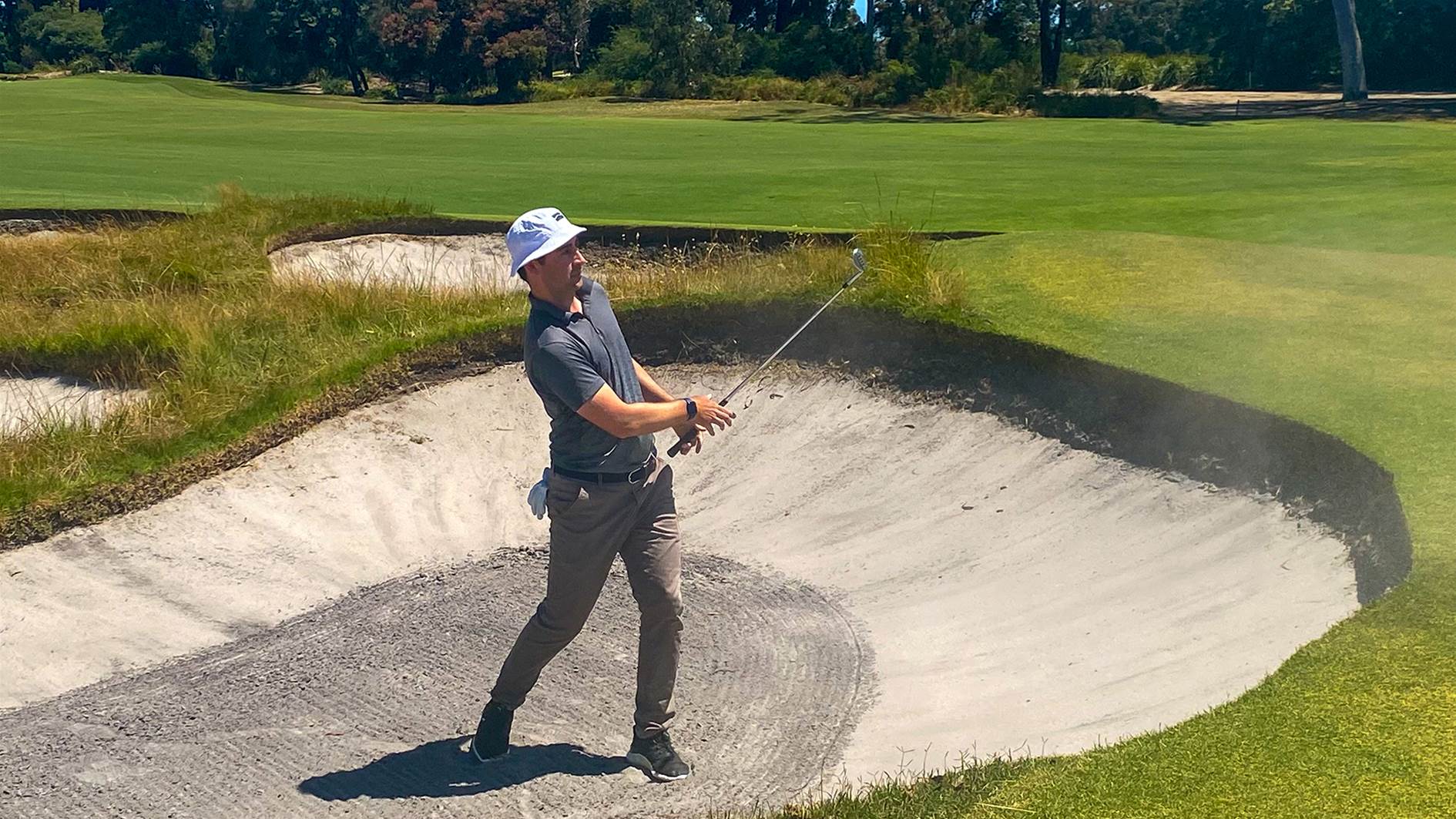 Brady Watt splashes from a bunker on the 18th hole at Kingston Heath. PHOTO: Jimmy Emanuel.

But his lead didn’t last beyond his post round media commitments.

Playing in the third to last group, it was Blake Collyer, who turned 25 today, that spoiled Watt’s party.

Collyer (pictured top), T39 last week at the Gippsland Super 6, went bogey-free around ‘The Heath’ and managed four birdies on the back nine to finish at six-under-par (66), one shot clear of Watt, with David Bransdon and Jed Morgan the next best at two-under.

“It just kind of came together throughout the round,” Collyer told Golf Australia magazine. “I just kept building up, I didn’t have any bogeys, so I just stayed patient and I knew it was pretty tough with the greens and the wind.

“I’ve been playing pretty solid, I had the Vic PGA and the Gippsland Super 6 the last few weeks and I felt like my game has been building. But I was more thinking around a two or three-under would probably be leading.”

The Victorian had his girlfriend Shan on the bag on Monday, and was heading out to an unknown, to him, dinner location to celebrate reaching a quarter century. A distraction that might be a welcome one as he sleeps on the lead of the Geoff Ogilvy and Mike Clayton hosted event that moves to Royal Melbourne tomorrow. 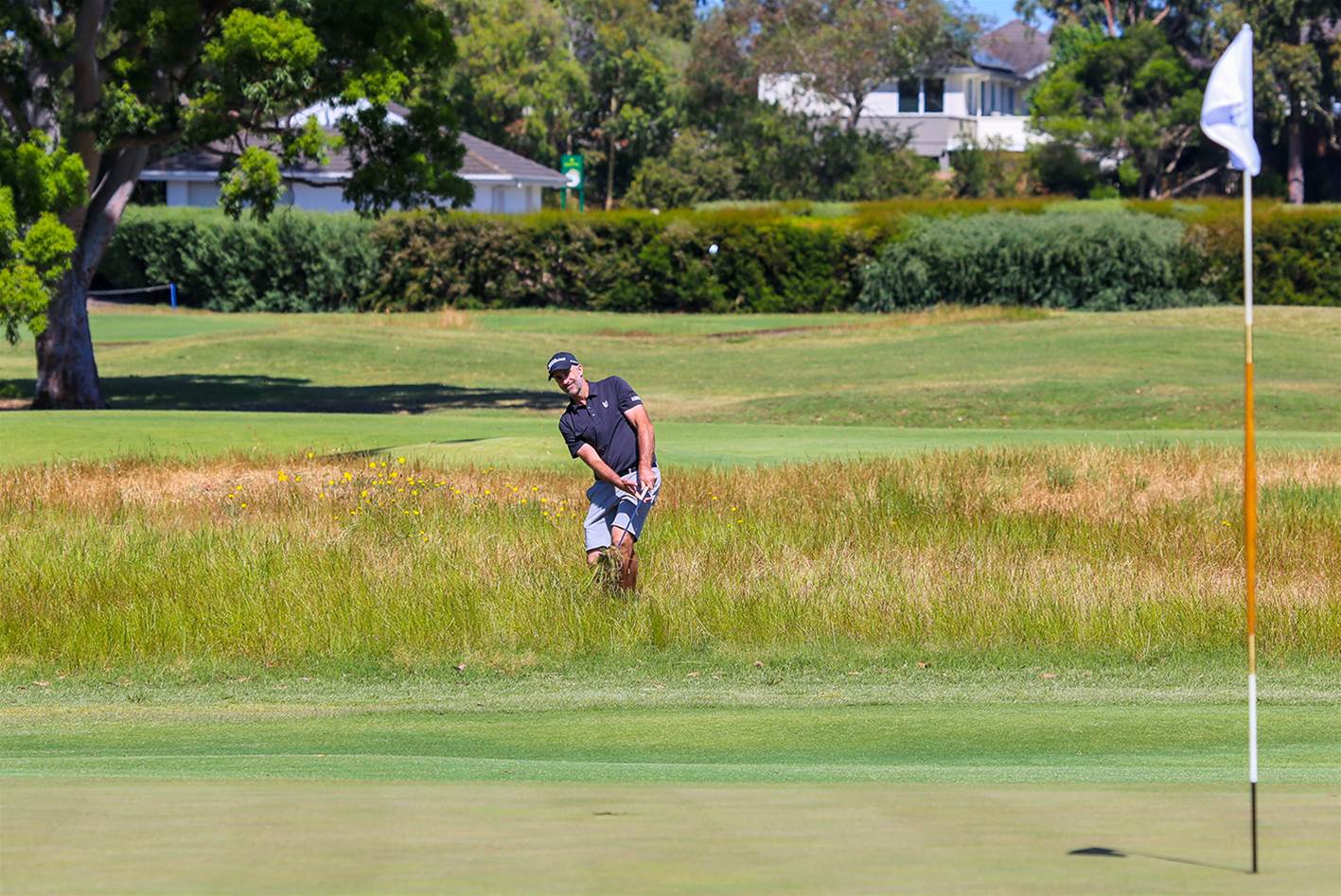 Ogilvy was thrilled with the first day of his event, although his play might not have quite matched the atmosphere among the players, media and small crowd assembled in Melbourne's south-eastern suburbs. The 2006 U.S. Open champion for a two-over 74 that he knows doesn’t put him out of the hunt, despite some rust on his competitive game.

“My expectations were very low. I’ve played a little bit in the last month but scorecard in the pocket golf is a little different especially,” the Golf Australia magazine columnist said.

“It dawned on me very quickly – I hadn’t really thought about it I guess – but we’re going to have four days in a row of Sunday Australian Open pins.

“It could have been better but it could have been a lot worse, to ... four over after 11 I could have been signing for an 80 or something so to sort of pick a couple up on the way in – and it’s not the easiest finish here 15 16 17 18 – so to par all of them was pretty good and start again tomorrow.”

Despite losing the lead, Watt will like where he sits after day one, with the final day feel of each day across the four courses clearly suiting his game out of the gates.

“It was pretty hard today, I got it around,” Watt said. “I hit a lot of irons off the tee and kind of hit it in the spots where you need to and attacked the course from there.

“The bunker shot (at 18) was really good, so I basically didn’t have to putt which was really good. But it was just a battle, it is a really tough course when it is playing like that.” After eagling the par-5 12th hole, Bransdon looked a likely challenger to Watt and Collyer, before bogeys at 15 and 18 saw him slide back into a share of third. The 48-year-old Melburnian crediting his experience for his scoring, even if his playing partners’ ages gave him a slightly harsh realisation on the first tee.

“It was kind of relaxing because I walked onto the first tee and the combined age of my two playing partners was about 12 years younger than me. So I felt pretty old,” Bransdon said.

“I played with a young guy who hit driver everywhere and I have never entertained that idea around here. I have always played this golf course by plodding my way around.”

Every person on the grounds at Kingston Heath was vocal in their praise for the layout and the event format that has drawn international and local interest despite being played the week leading into Christmas. The tournament's draw exemplified by the presence of US Tour players Lucas Herbert and Su Oh who struggled to a five-over and two-over opening salvos respectively. Lucas Herbert drives on the 17th hole. He signed for a five over 77. PHOTO: Brendan James.

Many of the players having backed up from a marathon Sunday at Warragul Country Club and the match play format of the Gippsland event felt understandable mental and physical strain as their year comes to a close.

The caddie for Jordan Zunic, who sits in a share of fifth with Marcus Fraser and Matias Sanchez at one-under, summing up the feelings of all involved having looped his man to a runner-up finish just a day ago.

“If it was anywhere or anything else, we wouldn’t be here,” Jono Painter said.