Prom Meesawat opened his campaign with a four-under-par 68 to trail first-round clubhouse leaders Stephen Gallacher of Scotland and American Julian Suri by one shot at the Hero Indian Open.

The 34-year-old Thai – known as “The Big Dolphin” – traded five birdies against one bogey to stay close behind the leading duo, who posted matching 67s at the US$1.75 million event staged at the challenging DLF Golf and Country Club.

Starting on the 10th hole, Prom remained patient as he tackled the demanding course, rolling in four birdies before stumbling with his only blemish of the day on the 8th hole. “I wasn’t too confident in my game coming into this week because I haven’t been hitting my driver very well,” Meesawat said.

“But I just tried to hit the fairway as much as I can and keep my ball in play.”

Hend, who was victorious in Malaysia last week, completed an amazing turnaround for his opening efforts. The big hitting 45-year-old recovered brilliantly with three closing birdies after making a triple bogey on the 9th hole, where he found the water hazard twice.

“To come back after that was great – and I think so far this year, this was the best round that I have played,” Hend said.

“I just told myself to get over those holes and concentrate on what I was doing. It’s just one of those golf courses where if you hit a bad shot, you start getting defensive … I just had to remind myself to not be defensive and keep playing how I have been playing. That’s the hardest part about it, you have to be strong mentally.”

Play was abandoned at 6.40pm local time due to fading light. Three players will return at 7.40am to resume their first round with the second round scheduled to start as planned. 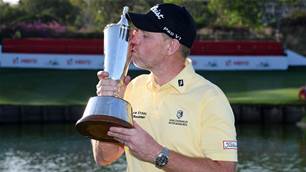