With quantity not an option, Australia can take heart from the quality of its bid for a second Masters green jacket.

That's the message from greats Greg Norman and Ian Baker-Finch as another small Australian contingent prepares to tee up in the year's first major championship at Augusta National next week.

With only Jason Day, Marc Leishman, Cameron Smith and 2013 champion Adam Scott currently eligible, it will likely be the third time in the past six years Australia has fielded just four players in the Masters.

Only a PGA Tour victory from one of six players at this week's Texas Open could boost the contingent to five.

Former World No.1 Norman believes Australia's decreasing representation is not reason to worry about the country's elite golf stocks. "I wouldn't say it's concerning; maybe it is just a cyclical thing," the two-time Open champion said.

"We're always going to be okay because we seem to produce a couple of great players every 15 years."

"The four this year are a good chance to win the Masters and I expect them to be in contention on Sunday," said former Open winner Baker-Finch.

"You look at the world-class short games of Jason and Cameron and you expect them to do well this year.

"Scotty has the comfort of already winning the Masters and experience; few know Augusta better than him.

"Leishman is in great form; he's the type of player who looks comfortable on a big stage like Augusta and you need that with all the noise and emotion at the Masters." The only Australian winner on the PGA Tour this season, Leishman has achieved three other top-four results while former World No.1 Day has two top-fives and another top 10.

Day has featured heavily at Augusta in the past including a runner-up in 2011.

RIGHT: Smith was the highest-finishing Australian at the Masters last year with his share of fifth pace. PHOTO: David Cannon/Getty Images.

However a question mark lingers over Day's fitness. His back problems have flared during his past three events and it remains to be seen how he handles such a gruelling week.

Leishman has improved markedly in the PGA Tour's strokes-gained-off-the-tee statistic this season and knows the driver will be key to success at Augusta.

"Length and accuracy is so important at Augusta because you need to take advantage of the par-5s and short par-4s," Leishman said.

"If you're not driving it long and into the right spots on the fairways, you'll get left behind."

Smith and Scott each have two top-10 finishes this year, with Scott earning a runner-up to Justin Rose at Torrey Pines.

Smith will be able to draw on the warm memories from his closing 66 at Augusta National last year which left him as the top Australian, sharing fifth place.

Since last year's Masters, Scott has reunited with former swing coach Brad Malone – the guru he says played a large role his famous maiden major victory at Augusta in 2013.

"Brad knows my game so well and the right aspects to improve right before a major," Scott said.

"With how I'm playing this year, everything is trending in the right areas of my game and that's a nice feeling to head to Augusta with." 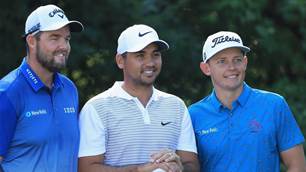