Japan’s outstanding year in golf continued when Mizuki Hashimoto shot a fourth successive round of four-under-par 68 to win the third edition of the Women’s Amateur Asia-Pacific (WAAP) championship by one stroke on Saturday.

At Abu Dhabi Golf Club, Hashimoto finished on a 16-under-par total of 272 and became the second successive Japanese champion after Yuka Yasuda lifted the trophy when it was last played in 2019. The Thai duo of Kan Bunnabodee (66) and overnight leader Natthakritta Vongtaveelap (72), along with Australia’s Kelsey Bennett (68), were tied second at 15-under-par.

Nagano Inagaki (68), also of Japan finished fifth at 13-under-par, with Malaysia’s Ashley Lau (70) a shot further back in sixth.

In April this year, Japan’s Tsubasa Kajitani and Hideki Matsuyama were winners in back-to-back weeks at the Augusta National Women’s Amateur and The Masters and a similar pattern unfolded in the UAE with Keita Nakajima winning the Asia-Pacific Amateur Championship in Dubai last week.

Apart from the beautiful trophy, the 19-year-old Hashimoto secured major championship places in next year’s AIG Women’s Open and the Amundi Evian Championship as well as the Hana Financial Group Championship and an invitation to play in the Augusta National Women’s Amateur. 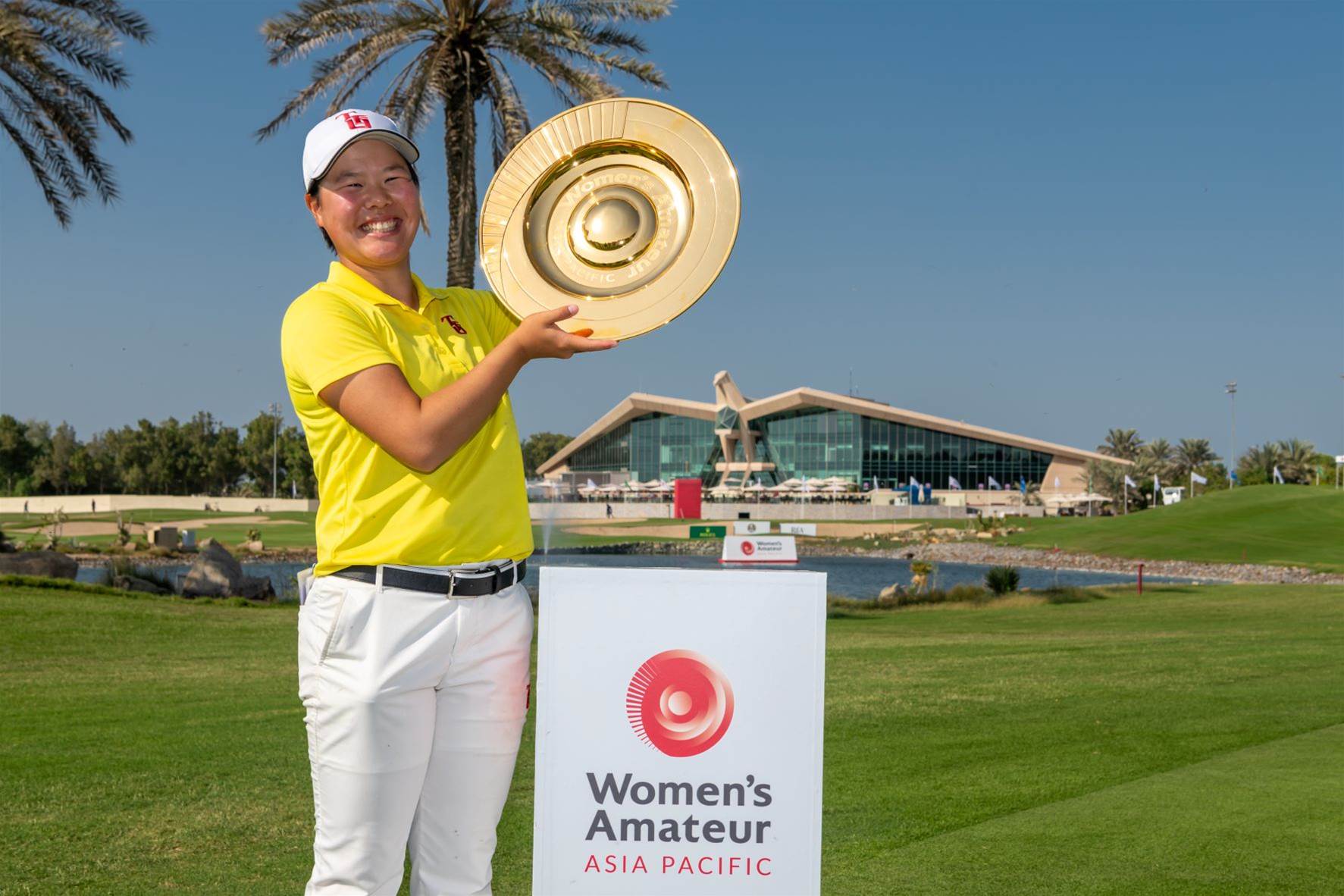 “I have always seen these tournaments on the television. To be able to play in them is like a dream-come-true for me,” said Hashimoto, the World Amateur Golf Ranking (WAGR) No.121.

“I am unable to say any words right now. I feel so happy to win this championship. I would like to say a big thank you to my teammates and everyone who supported me all week.

“The eagle on the third hole was a big surprise for me. I kept fighting hard after that until I made the winning putt. I played really well today.”

Hashimoto started the day three shots behind Vongtaveelap. With the long-hitting Thai showing great consistency – she was bogey-free for 52 holes coming into the final round – it needed something spectacular from the chasing pack to catch her.

"Obviously, a few more putts could have dropped but I held it very well. I was nervous coming in the last few holes."  Kelsey Bennett.

The lead was increased to four when Vongtaveelap made a birdie on the second hole but Hashimoto holed her second shot from 135 yards for a spectacular eagle two on the 3rd to ignite her round and she followed it up with a birdie at the next after hitting her tee shot a foot from the flag.

The 19-year-old from Bangkok’s resolve finally cracked on the par-4 sixth hole when she made a bogey after a poor bunker shot and that was followed by a double bogey on the par-3 seventh when she pushed her tee shot into the water.

Vongtaveelap bounced back immediately, however, with a stunning eagle on the eighth when she hit her trusted 18-degree hybrid second shot to four feet.

A Hashimoto bogey on the ninth seemed to tilt the scale in Vongtaveelap’s favour again but the Japanese player made amends with a second shot to tap-in distance on the 11th and then closing with seven consecutive pars. 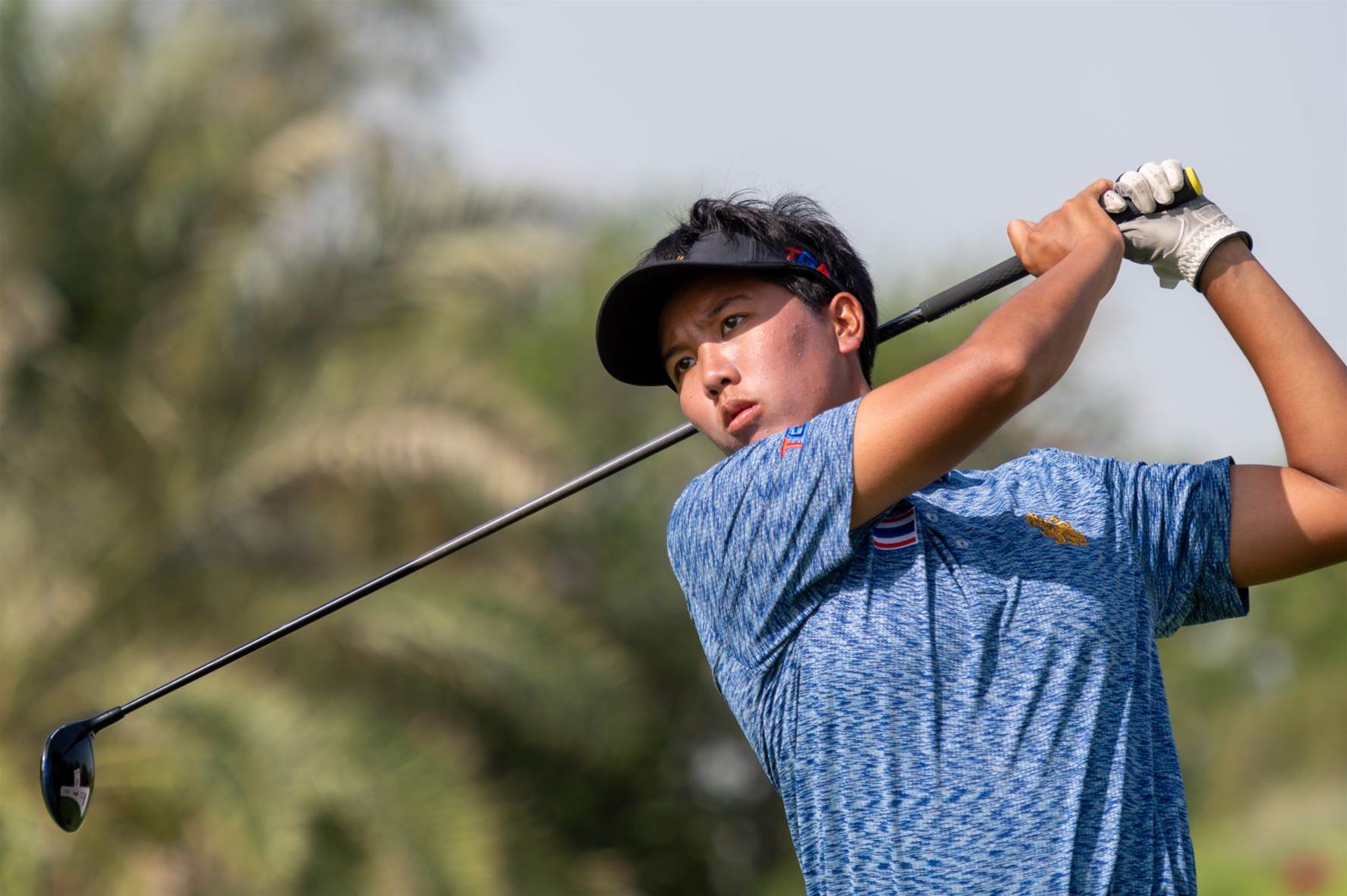 Thailan'ds Natthakritta Vongtaveelap led for much of the event but couldn't close out the win on the final day. PHOTO: WAAP2021.

Vongtaveelap still had a chance to force the issue with an eagle on the 18th but she pushed her tee shot into the water and could only make a par. Bennett, who jumped into contention with a chipped-in birdie at the 13th could not pick up one last shot that could have forced the play-off.

“I’m a little disappointed but I did my best. I am so pleased that I was invited to play in this tournament. This has been a new experience and I won't forget it,” said Vongtaveelap.

“I have learned a lot. I have never played in a championship of this stature before and I have never been this nervous. I will keep improving my mindset and my skills.”

Bunnabodee, who started the championship with a three-over 75 and played with an ankle injury, shot the day’s best round of 66. She had matched the low round in the history of the championship – an eight-under par 64 – on the second day.

“It’s kind of crazy because after round one I never imagined that I could come this far. But after that eight-under par round I just kept going,” said the Purdue University star.

“This championship means a lot to me because the winner gets to go to the major events and I am really excited as I really want to play in the Augusta National Women’s Amateur at Augusta National. I was just trying my best.”

Bennett, the WAGR No.209 from New South Wales, said, “Today was really good. I was happy with the way I played. Obviously, a few more putts could have dropped but I held it very well. I was nervous coming in the last few holes. After the bogey on the first hole I was thinking it’s not very good but I managed to come back.”

Japan’s Ayaka Tezuka made the only hole-in-one of the championship and the first of her life when she hit a perfect 8-iron shot from 133 yards on the fourth hole.

It was a strong finish for India’s Natalii Gupta, a nominated player of the Emirates Golf Federation (EGF), who added a two-under par 70 in the final round to finish tied 13th at six-under-par 282.

The 17-year-old, born and brought up in the UAE, said, “I had a blast this week. It was so much fun. I’m thankful to be here and to be given the opportunity to play this week. It was not the best finish today but I had fun.

“I’ve never played an event that’s this important and of this class. It was pretty good to see the standards. But I thought I hit my goal this week.” 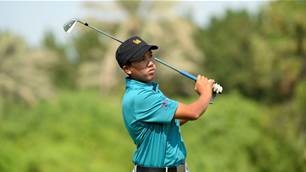 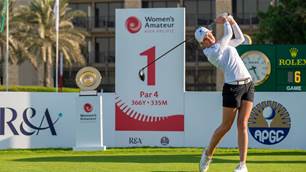 Aussie Bennett in the mix at Women’s Amateur Asia-Pacific 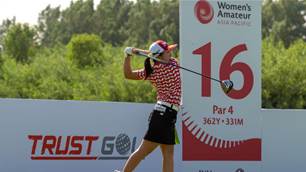 Japanese players hoping to continue year of success at WAAP