Jordan Zunic has given the chasing pack a slight sniff at the Australian PGA Championship, closing bogey-double bogey to finish at 17-under, three ahead of Cameron Smith.

The New South Welshman was on fire for his entire third round before finding the right-hand fairway bunker at the penultimate hole. Making 11 birdies and five pars in his first 16 holes to reach 20-under-par as he stood on the par-4 17th tee.

“It was a bit of a flash, that round,” Zunic said. “I can't remember it almost because I was just going with the flow. I just did such a great job today of what I've been working on in regards to my mindset.”

The 2015 New Zealand Open champion poured in seven birdies over the first nine holes, including four in a row to finish the front side in only 29 strokes. Zunic took the lead on his own for the first time with birdie at the par-4 7th hole, as the leaders tread water behind him. With tournament favourite Marc Leishman managing nothing but pars on the front side. 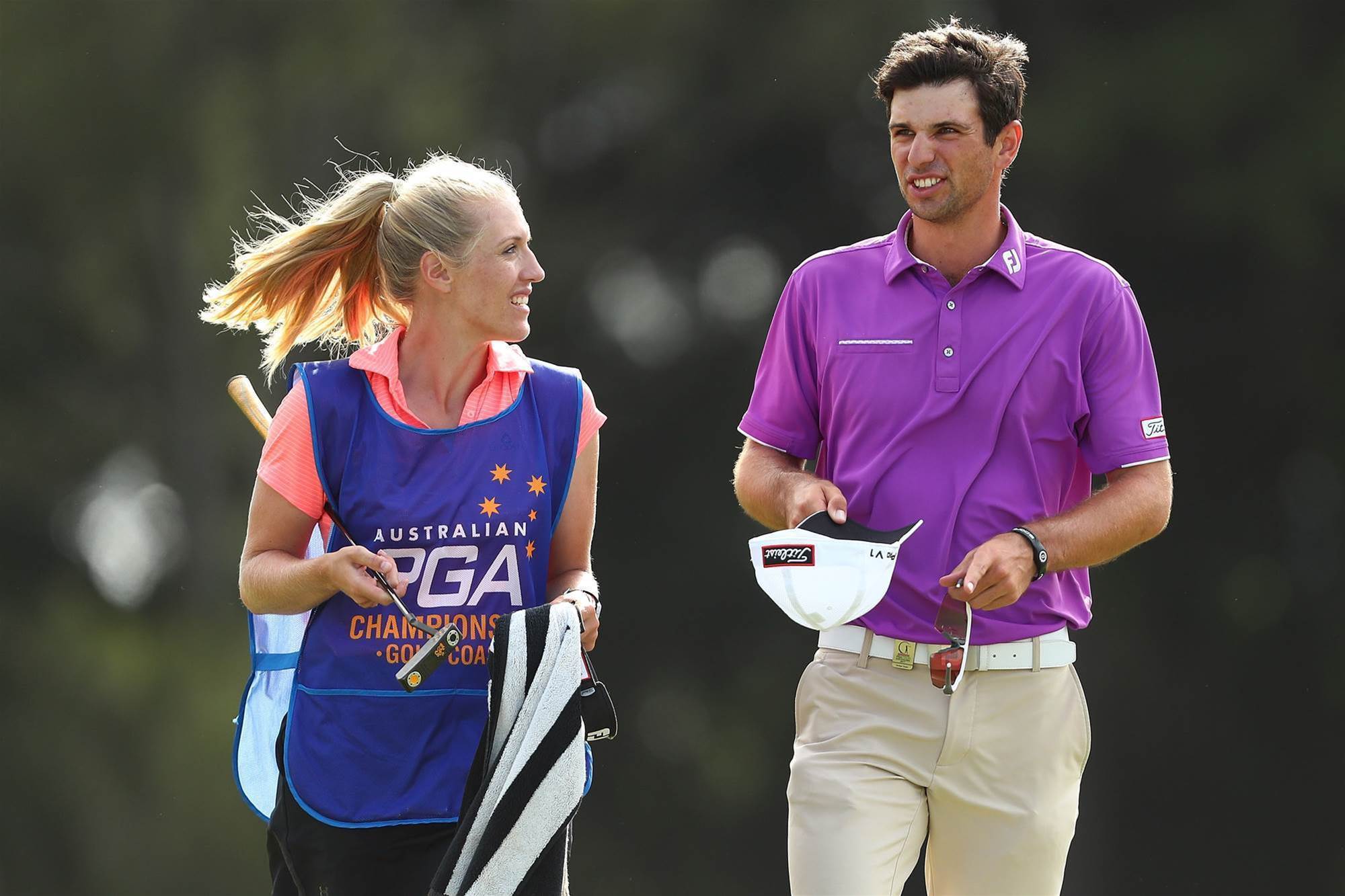 Zunic and girlfriend and caddy Olivia Marlow walk off the 18th after a disappointing double bogey. PHOTO: Getty Images/Chris Hyde

Zunic then parred the 10th and 11th holes before pulling his drive left into the water hazard at 12, setting the biggest test of his newly found mental strength developed under the tutelage of former Australian PGA Champion Nick O’Hern, who Zunic assured the media he will make contact with before the final round at RACV Royal Pines.

“I probably will,” he said of talking with O’Hern. “I actually had a chat with Nick this morning before I teed off. He agreed to meet me this morning, just had a bit of a chat, nothing too serious. I just told him how I was feeling and what I did yesterday and how I've been doing things really well. He just reassured me that what I was doing was good.”

The 25-year-old took his time deciding on where best to lay up at the 12th hole after taking a drop, going back and forth with girlfriend/caddy Olivia. Before eventually taking his second shot over the trees to the left of the par-5, finding the rough with plenty of work to do to safe bogey let alone par.

An average wedge shot meant a bogey appeared almost the best possible result for Zunic who admittedly had plenty of shots to spare. But when you’re hot you’re hot and the former Northern Territory PGA winner was just that, finding the bottom of the cup with his par putt from around 20-feet.

“Yeah, I think so,” Zunic said when asked if the par at 12 outweighed all his birdies in terms of importance. “That really kept my momentum going. I had already said to myself after the tee shot, I just said just get it back in play, minimize the damage, get myself on the green, give myself a look at par.

“To be honest, I already accepted that if I didn't make par and I made bogey, I was okay with that because I had made so many birdies that I felt like it didn't matter.” With a bounce in his step Zunic then birdied the next two holes as the wind strengthened and conditions got harder. A fact not lost on Zunic, albeit difficult to decipher from his exemplary play.

“I mean, it was tough today because the wind was gusting,” Zunic said. “I stepped back on quite a few shots today which people would have saw out there and that was just because you're over a shot, you've got the feeling and all of a sudden you hear the wind blow, you feel it gust and you know if you're going to hit that putt that it's going to get affected by that gust, so that was the tricky part.”

The man from Wollongong, who is lucky to be alive let alone playing golf after suffering a serious head injury in a car crash when playing amateur golf in America in 2013, proceeded to find the downwind par-5 15th green in two. And was unlucky not to walk to the rowdy par-3 16th further under par, with his eagle putt taking a huge piece of the hole before lipping out. Leaving just a tap-in for his 10th birdie of the day and 19-under total.

Zunic then excited the packed marquee behind the 16th green with his tee shot landing close to the flag, easily converting his 11th birdie to reach 20-under par as he stood on the penultimate tee.

Having brought RACV Royal Pines to its knees, and even entertained thoughts of a magical 59, Zunic dialled back and hit 2-iron from the tee, finding the fairway trap and leaving an awkward 150-metre approach to the green. “That was exactly how I played it the last two days,” he said of his 2-iron at 17. “I birdied it yesterday and I parred it the first day. So, for me that's just the play down there all day. I'm really comfortable with that play and I'll probably continue to do that tomorrow.”

His second shot found a bunker short left and a bad lie had Zunic standing awkwardly as he splashed out onto the green, leaving his second lengthy par putt of the day. The World No.636 couldn’t repeat his efforts from the 12th, however, settling for a bogey five as he walked to the tee of the difficult par-4 last.

With the crowds around him building Zunic leaked his drive to the right at 18 finding the fairway bunker, with a grass mound cut into the trap making attacking the green difficult.

The 25-year-old hit his second short left before an average chip came up a long way short.

A typically good putter, Zunic’s first effort was disappointing and led to an eventual three putt and double bogey six that deflated the throng of fans surrounding the final green.

The unfortunate finish had little effect on Zunic, however, who assured the media after the round he was taking nothing but positives from his course record equalling 64, which tied his playing partner Rhein Gibson’s effort from 2015.

“What two holes?” Zunic joked after the round. “I just think of 16 good holes, that's all I see in my mind and that's all I'm sure we'll talk about tonight because I played unbelievable golf for 16 holes.

“… if you had told me that I was going to have 64 at the start of today, I would have taken it, that's for sure. It was a shame what happened on the last two holes, but to be honest, I didn't even do much wrong.” Bland managed a tidy one-under round on Saturday that has him four back of Zunic heading into the final round. PHOTO: Getty Images/Chris Hyde

Having missed out at European Tour school recently Zunic is now a huge chance of securing a Tour card with a win or the highest rank in the top-10 of the PGA Tour of Australasia Order of Merit not already exempt. But after the disappointing close to the round the Joe Kirkwood trophy isn’t his just yet.

With playing partner from Saturday Smith set to go around with him again on Sunday after his own 5-under round of 67, knowing there is plenty of birdies available having seen Zunic’s round up close.

“He put on a bit of a display the first 13 or 14 holes there,” Smith said of Zunic’s round. “He was on a bit of a run, it was pretty incredible to watch actually. And in that wind, he was just a magician on the greens as well.”

The Queenslander made seven birdies of his own during the third round but will be rueing his two bogeys early in the round that have him three back rather than one going into the final round.

“Just didn't let Jordan's round get ahead of me there,” Smith said of trying to play his own game while witnessing something special. “I just kept doing what I was doing. I knew I was playing well, I knew I was putting well. Just needed a couple chances and took advantage of them.” Despite a third round of two-under main tournament drawcard Sergio Garcia appears too far back. PHOTO: Getty Images/Chris Hyde
Smith headed for the practice fairway after the round, showing he is still thinking of winning and that the tournament is far from over.

“I'm going to go hit a few balls,” Smith said. “I think the wind affected my swing there a little bit at the end so I'm just going to go work on a couple of things, the setup, and have a relaxing afternoon.”

Behind Smith is overnight joint leader Adam Bland who mixed birdies with bogeys to finish at one-under for the day and 13-under for the tournament. The South Australian was the only under par player in the final group, with Leishman and Greg Chalmers firing two-over and one-over rounds respectively.

Greg Norman medallist, Leishman struggled with the putter early in his round and failed to take multiple short birdie chances. After making 11 straight pars the Victorian recorded bogey at the12th followed by double at the next to significantly hurt his chances of chasing down Zunic starting the final round at 10-under alongside David Bransdon, who fired a six-under 66.

“It was a tough day. Actually played quite well early and just couldn't make any putts unfortunately,” Leishman said after his round. “Frustration got the best of me on the 13th tee there. Got one birdie coming in, a couple good par saves. So, disappointing, but I think I'm, what, seven or eight back going into tomorrow. Need to go out and attack and try and shoot as low as I can.”

Going low will be the focus for the entire field as they get underway early to avoid the predicted storms set to lash the Gold Coast on Sunday afternoon, including Zunic who admitted after the round to being a little surprised by just how many birdies he made on Saturday.

“I mean, I was surprising myself, I'll be honest,” he said. “Every time I looked at a shot, I just felt comfortable over it. I looked where I wanted to hit it and the ball was going there and that happens sometimes when you play. It doesn't happen very often, but when it does it's good fun.”

If Zunic can keep having fun on Sunday at Royal Pines the title is almost within his grasp and he will be hoping the early start means a relaxed Sunday afternoon as the newest Australian PGA Champion and European Tour member.

“It is what it is,” Zunic said of the early start. “That would be good, we can play early and be done by lunchtime and chill out in the afternoon. Yeah, that's fine if it's going to make us get through the round without having to deal with bad weather, I don't mind what time we tee off. That's just fine with me.”

The final group will tee off at 8am Queensland time and the LIVE coverage will commence at the same time on 7TWO.