Webb Simpson isn’t the first player to ask his teammate to take the opening tee shot of an international team competition, and he won’t be the last. It’s one of the most stressful situations any player will face in his career.

Eight years ago, Simpson was the youngest member of the US Presidents Cup team. He’d barely kept his card the year prior, but quickly vaulted into the world’s elite by winning twice in a three-week span late in the 2011 season. One of those victories came at the second event of the FedExCup Playoffs, leading to a runner-up finish in the season-long standings.

Those wins vaulted Simpson from outside the top 50 of the world ranking to inside the top 10 by the time he arrived at Royal Melbourne, where he represented the US for the first time as a professional.

His career had changed rapidly, and now he faced the prospect of leading off for a star-studded US team that included Tiger Woods and Phil Mickelson. Could Simpson, one of golf’s newest stars, be blamed for being nervous?

Royal Melbourne’s second hole is a par-5, so conventional wisdom would’ve said that Simpson’s long-hitting partner, Bubba Watson, should’ve teed off on that hole in their Foursomes match, meaning Simpson would tee off on No.1.

But the partners decided before the first day of competition that Watson, who’d made his US debut at the previous year’s Ryder Cup, would do the honours to start the match.

“I wanted Bubba to go first because I was so nervous,” Simpson said recently. “Probably at that point it was the most nervous I had been in my career, even trying to win my first tournament just a few months prior.”

Simpson said he’d never seen so many people gathered around a tee. Watson found the middle of the fairway, leaving Simpson with a 90-yard approach for his first Presidents Cup shot. No butterflies here, as Simpson’s wedge shot lipped out.

US teammate Matt Kuchar called it “one of the best opening shots anybody’s ever had in a team competition.”

Kuchar then followed with a rhetorical question. “You having a good time, Webb?”

The answer was undoubtedly yes. Watson and Simpson won their first three matches that week, all by at least a three-hole margin. Simpson left his first Presidents Cup with a winning record (3-2-0) as the US rolled to a 19-15 win. 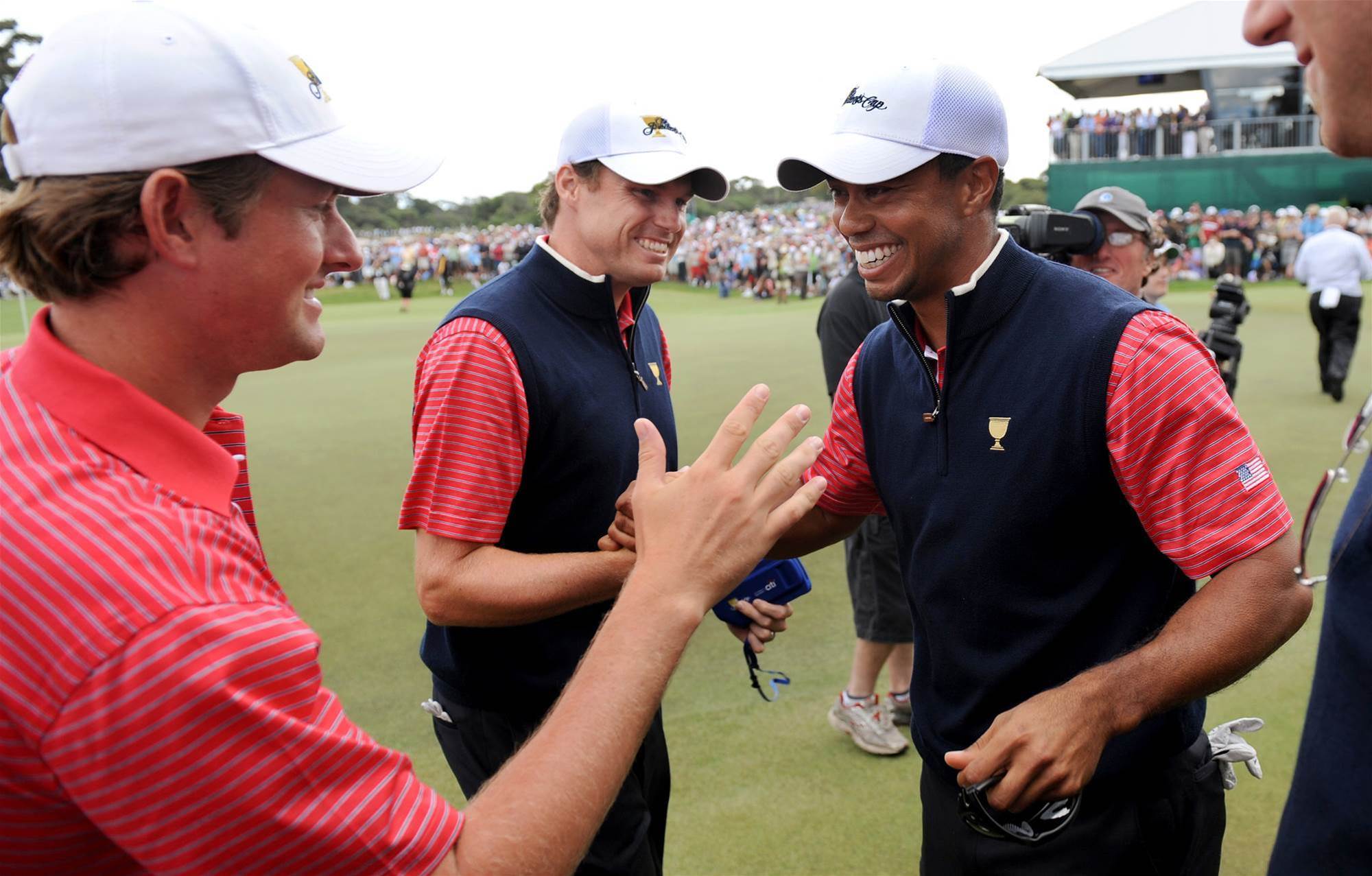 Simpson is scheduled to return to Royal Melbourne for this year’s Presidents Cup. He’s now one of the veteran members of the team; only Kuchar is older among the eight automatic qualifiers. Simpson, 34, will be playing his sixth international team competition, including his third Presidents Cup.

He made the team with another late-season surge. He was 11th in the US standings as recently as July but finished second in back-to-back starts to crack the top eight in the US standings. A final-round 64 put pressure on Brooks Koepka at the World Golf Championships-FedEx St. Jude Invitational. Simpson shot four rounds of 65 or lower at the Wyndham Championship, but finished a stroke behind J.T. Poston, who became the first player since Lee Trevino to win while going bogey-free over 72 holes.

“You can’t force anything in this game … but I felt driven to play really well and be that much more focused the last few events,” Simpson said. “It’s a long time between now and December and anything can happen. Guys not even on the radar can play well and (get a captain’s pick).

“Being a captain’s pick is an honour, but to make the team feels even better. I’ve experienced both. When I sealed it, it definitely was a sigh of relief.”

Returning to Royal Melbourne book-ends an eventful stretch of his career, filled with both the highs and lows that this game can bring. He won a major and The Players since his first trip to Australia, and also cried tears of frustration with his wife during his deepest putting struggles.

“I’ve definitely reflected a lot with Dowd. A lot has happened with golf and life since we started having kids,” Simpson said.

Their first child, a son named James, was born in 2011, the same year Webb made his Presidents Cup debut. Their fifth child, a daughter named Eden, will celebrate her first birthday on the Sunday before this year’s event.

“In 2011, if you had said I’d win a US Open and Players and have five kids and Dowd had started a school (The Oaks, a private Christian school in Charlotte, North Carolina), I would be smiling from ear to ear,” Simpson said.

“I know what it’s like to struggle with your game and have a bad stretch. Back then I was kind of eyes wide open, taking it all in. Now I’m very thankful, knowing what I’ve been through, to be back on another Presidents Cup team.”

Simpson represented the US team four consecutive years from 2011-14. He was a captain’s pick for the 2014 Ryder Cup, playing just two matches (0-1-1) after struggling alongside Watson in the opening session. That was the last event where Simpson used the belly putter that helped him win the 2012 US Open. Simpson wanted to get an early start on finding a new method before the USGA’s anchoring ban took effect.

He didn’t make another US team until last year’s Ryder Cup. His victory at the 2018 Players, his first win since late 2013, helped him earn one of the team’s automatic qualifying spots. He was a bright spot during a difficult week at Le Golf National. The US lost 17.5-10.5, but Simpson (2-1-0) was one of just four Americans with a winning record. 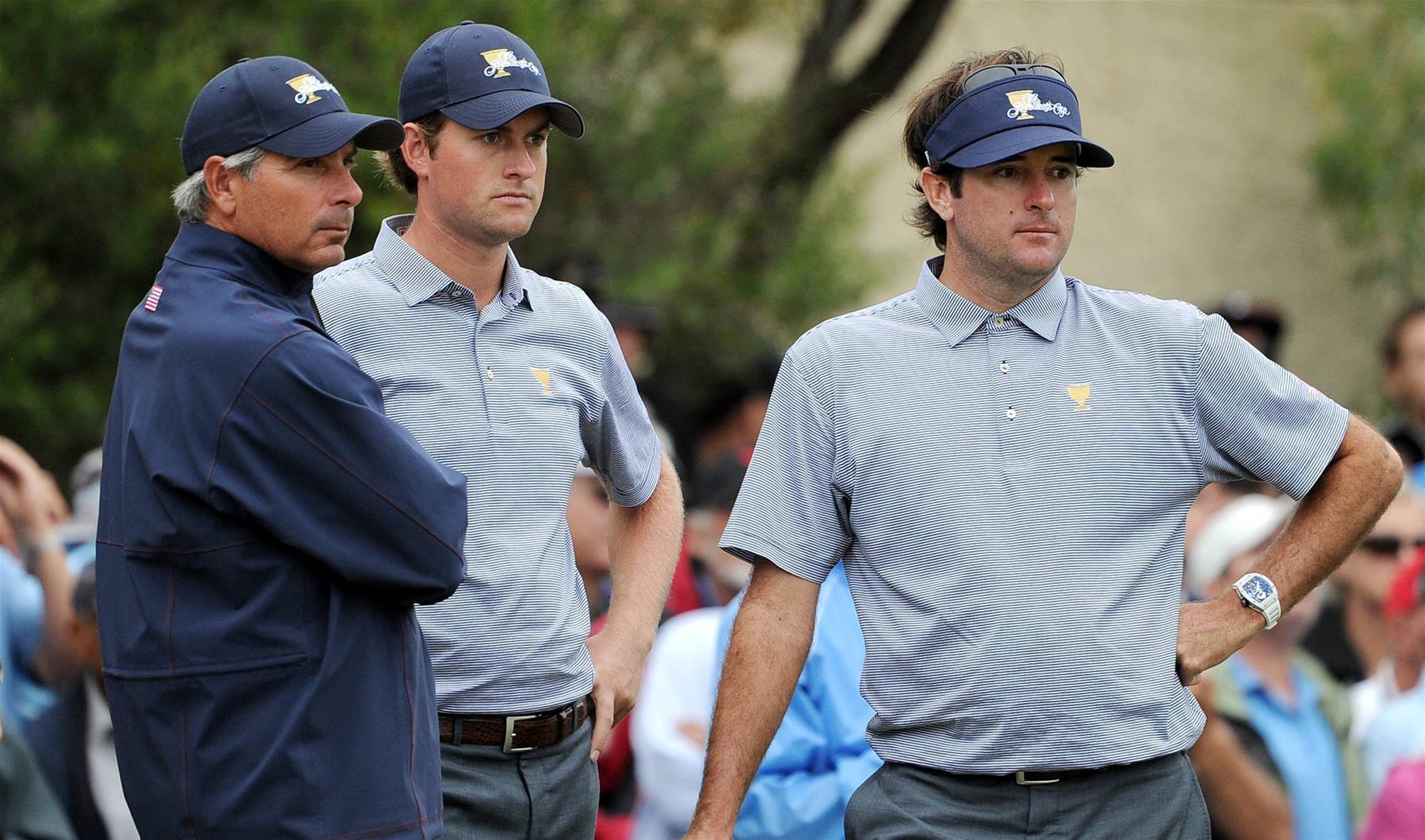 Simpson has never played without Watson by his side when they’re both representing the United States. PHOTO: William West/AFP/Getty Images.

There were calls on social media for Simpson to see more playing time. Le Golf National, which required precision over power, was perfectly suited for his game. Simpson showed that with a 3-and-2 win in his singles match with Justin Rose, who’d won the FedExCup just a week earlier. Simpson’s win pulled the United States within two points during an early Sunday surge.

“He’s a different man now,” said his caddie, Paul Tesori. “You can see the confidence everywhere he walks. He has a firm belief in his golf game. Coming out of those struggles, it’s made him a different player. A stronger player.”

Simpson didn’t win this season, but he had 15 top-25s in 21 starts, including four finishes in the top three. He also finished fifth at this year’s Masters. He’s the only player to finish in the top 30 in the past eight majors. He’s qualified for the past three Tour Championships.

Simpson ranked 145th in driving distance last season but is thriving in a power game. He finished outside the top 100 in Strokes Gained: Off-the-Tee but is inside the top 20 in the other three Strokes Gained statistics (Approach-the-Green, Around-the-Green and Putting).

Royal Melbourne is a good fit for his game. Its firm conditions give his tee shots extra roll and require precise distance control with the irons, one of Simpson’s strengths. And the short grass around the greens mimic the conditions Simpson grew up with in North Carolina.

“It brings in the imagination, which I love. That’s why I’ve really grown to love The Open. Royal Melbourne isn’t a links, but it shares certain characteristics, the imagination and having to get the ball on the ground,” Simpson said.

His opening shot of 2011 is proof. The low, flighted wedge rolled some 50 feet on the green, including 15 feet of right-to-left break, before hitting the hole and stopping five feet away.

Tesori said four of Simpson’s five PGA Tour wins have come on firm courses. “Webb grew up with the bump and run,” he said.

Simpson’s strong iron play and putting make him an appealing Foursomes partner. Pairing him with a long hitter compensates for his one shortcoming and creates a well-rounded team.

His experience at Royal Melbourne will be a valuable asset, especially as he finds a new partner to conquer Alister Mackenzie’s Australian masterpiece alongside.

Barring a spectacular run, Watson won’t be on the US team. He finished 81st in this season’s FedExCup and 20th in the US Presidents Cup standings. This would be just the second time Simpson has played on a US team that hasn’t included Watson. When they’ve both been on the same US team, Watson has been Simpson’s partner in every match he’s played.

“Since I’m older and this is my sixth team event, I want to be in a position where I’m able to play with anybody,” Simpson said.

Perhaps he could take the first tee shot off the hands of a nervous rookie. He’d be returning the favour. 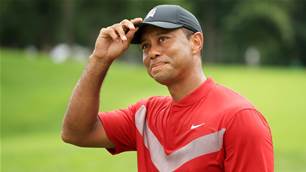 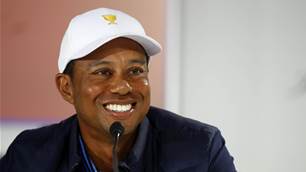