The star-studded American Presidents Cup team had to draw on all their talent, experience and a little luck to avoid an embarrassing International team clean-sweep of the second day foursomes.

Six birdies across three tightly contested matches in the closing stages of the foursomes session turned the tables in favour of the United States, just as the Internationals looked destined to grab all five foursomes matches and move to an almost unassailable lead in the competition.

But foursomes can be a volatile format where holes are won and lost by inches or an ounce of good fortune. In the final hour of the session, the Americans grabbed every opportunity presented to fight their way back into the event. They started playing the firm Royal Melbourne course better than at any time during the opening day fourballs, using the greens contours to set-up a slew of birdie chances.

For the first time since 2005, the Internationals lead the Presidents Cup through the first two session and will head into the lengthy round of eight Saturday matches 6.5 to 3.5. 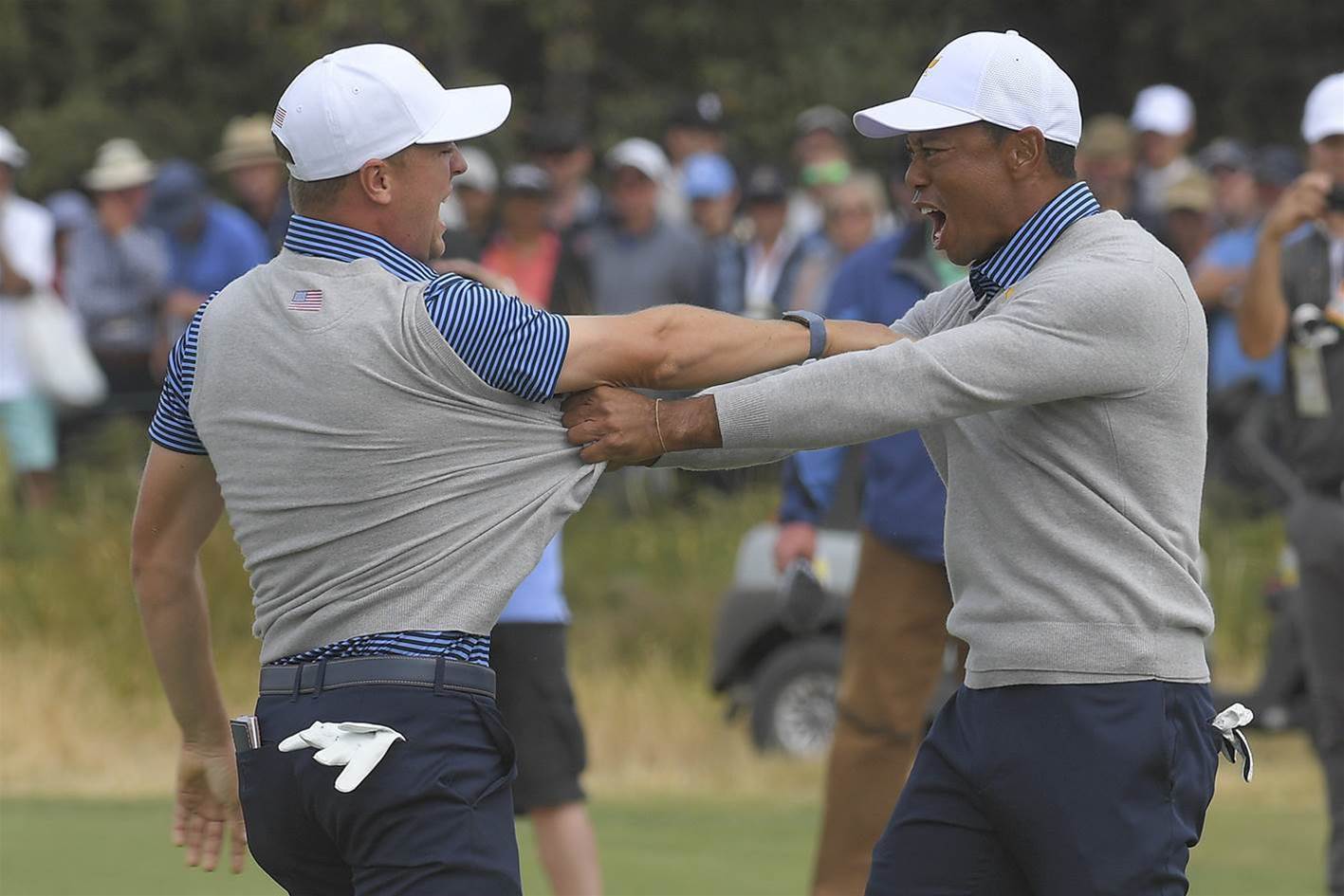 Justin Thomas and Tiger Woods can't contain their jubilation at snatching a much-needed point in the foursomes. PHOTO: Getty Images.

With the Internationals picking up the first two points of the foursomes session through 3 & 2 victories to Adam Scott and Louis Oosthuizen as well as Marc Leishman Abraham Ancer, the US pairing of Patrick Cantlay and Xander Schauffele stemmed the flow of points and turned the momentum back into the American team’s favour. The duo birdied two of the last four holes, including the 18th, to snatch a vital point.

Likewise, Tiger Woods and Justin Thomas birdied the 13th and 18th holes to claim another 1 up victory. In the only halved match of the session, Americans Gary Woodland and Rickie Fowler birdied two of the last three holes to avoid defeat. Fortune was riding with Woodland, who smashed his drive into the hospitality tents lining the 16th fairway only to have his ball ricochet into the middle of the fairway. From there, Fowler hit his approach onto the green and Woodland holed the putt from eight feet for an unlikely birdie.

“Momentum is huge. That was a huge half point,” Woodland said. “Anytime you can scrape out something; we did it.

“Now we have to regroup. We have 36 holes ahead of us tomorrow and hopefully go out and flip this a little bit.” Having taken his player’s hat off and slipped into his Captain’s hat, Tiger Woods spoke proudly of the display his team put on during the closing stages of the foursomes.

“Yeah, at one point, we were down in four and even in one, and so it looked pretty bleak, but the guys turned it around,” Woods said. “They played phenomenal coming in. It was important for us to end the way we did, and it totally changed the last hour.”

International Captain Ernie Els wasn’t too disappointed by sharing the foursomes matches points with the Americans.

“They played good at the end there,” Ernie said. “Tiger and J.T. won the last hole to win their match. Patrick Cantlay made another brilliant putt to win the last.

HOW THE MATCHES PLAYED OUT

The American pair made the best possible start when Matt Kuchar pitched to 12 feet from the rough and Dustin Johnson rolled in the birdie.

A second birdie followed at the short uphill par-3 5th when Kuchar binned a 20-footer across the dramatically sloping green. When Louis Oosthuizen missed a five-footer to square the hole the Americans moved to 2 up and were seemingly well in control.

Scott and Oosthuizen pegged one hole back with a par at the next, but the Americans responded with a hole-winning par at the 7th to move back to 2 up. 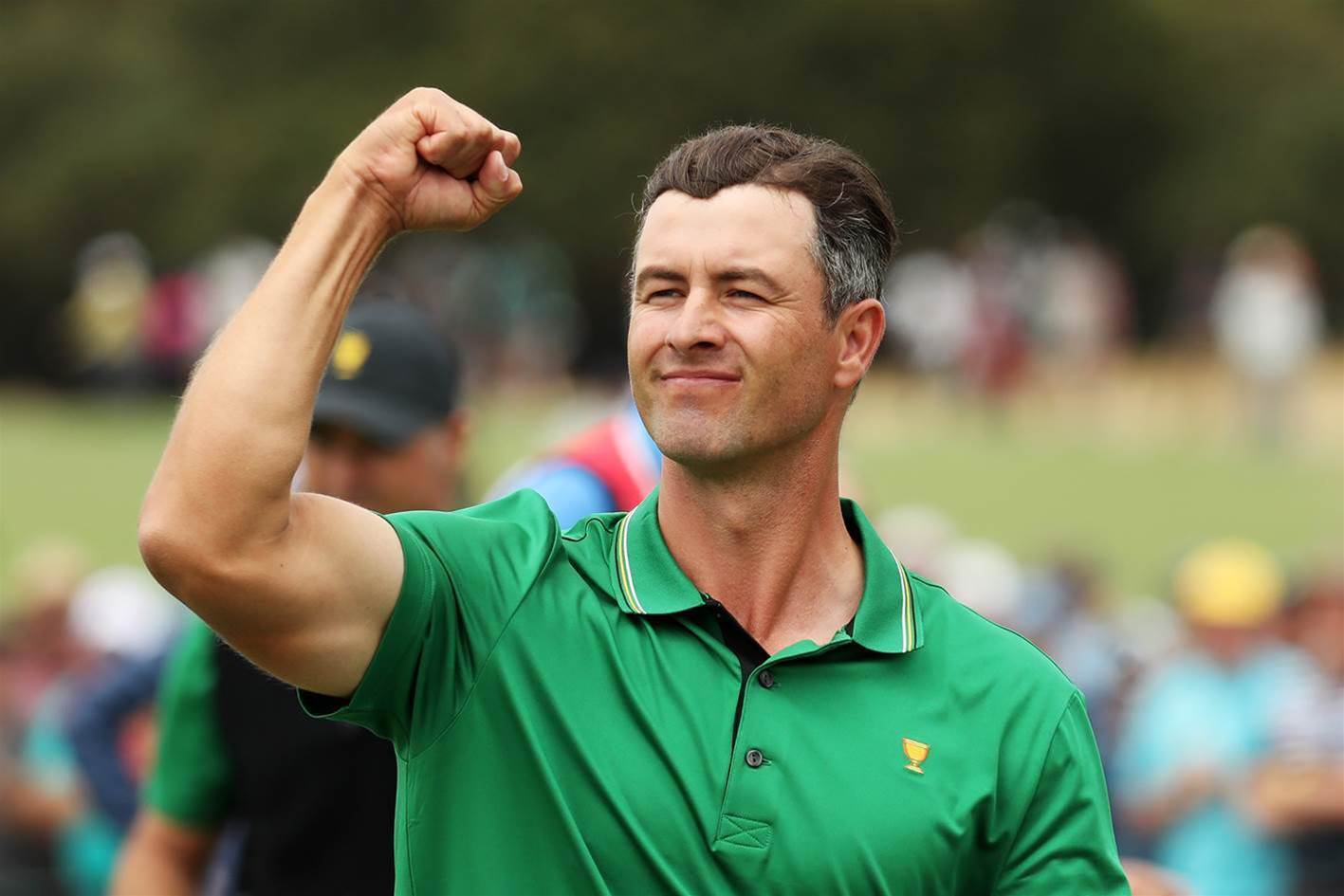 The US pairing didn’t win another hole in the match as the Internationals won five of the next nine holes. While Scott and Oosthuizen combined well, Johnson and Kuchar struggled to stay in touch and bogies at the 13th and 14th holes signalled their demise as the International pairing marched on to a 3 & 2 win and moved the ‘home side’ to a 5-1 lead over the visitors.

A smiling Scott said after losing the first two holes, they got a lucky break on the 8th hole when the Americans bogied, which turned the course of the match.

RELATED: FOURSOMES GOLF ... WHEN SORRY IS THE HARDEST WORD

“From there on, Louis and I just kind of applied the pressure,” he said. “We hit fairways and greens and never let up. They made a couple of mistakes and we made a couple of good putts for birdie and managed to walk it in with a couple to go.”

Johnson said the course, particularly the greens, were difficult to come to terms with.

“I felt like we played well,” Johnson said. “We had two three-putts out there, not hitting bad putts. We lipped out quite a few putts.

“Obviously they played very well, too. It was a tough match and we hung in there.”

The second match on course was the tightest of contests in the Friday foursomes, with neither pairing getting more than 1 up in front at any stage over 18 holes.

Adam Hadwin and rookie Joaquin Niemann led for most of the match but back-to-back birdies from Xander Schauffele and Patrick Cantlay at the 9th and 10th holes put the Americans 1 up.

The International pair won the 12th with a par 4 and a birdie at the par-3 14th to get their nose in front but were quickly pegged back by an American birdie on the par-5 15th.

The match continued to the final hole where the deadlock was broken by Cantlay, who followed up a very good approach from Schauffele with a brilliant clutch putt from 13 feet to snatch a momentum-turning point for the Americans.

“Ours was a hard-fought match today and we need to flip the script a little bit. We need to get going and hopefully that point on the board gets a little fire in these guys and we finish out these matches strong,” Cantlay said.

Webb Simpson and Patrick Reed mirrored the start by teammates Dustin Johnson and Matt Kuchar, making an opening birdie after Simpson stuffed his approach to one foot from the cup.

The International pair bounced straight back with consecutive birdies, as Leishman tapped in from 2 feet on the 2nd and Ancer continued his form with the flatstick, making a breaking 10-footer at the 3rd. 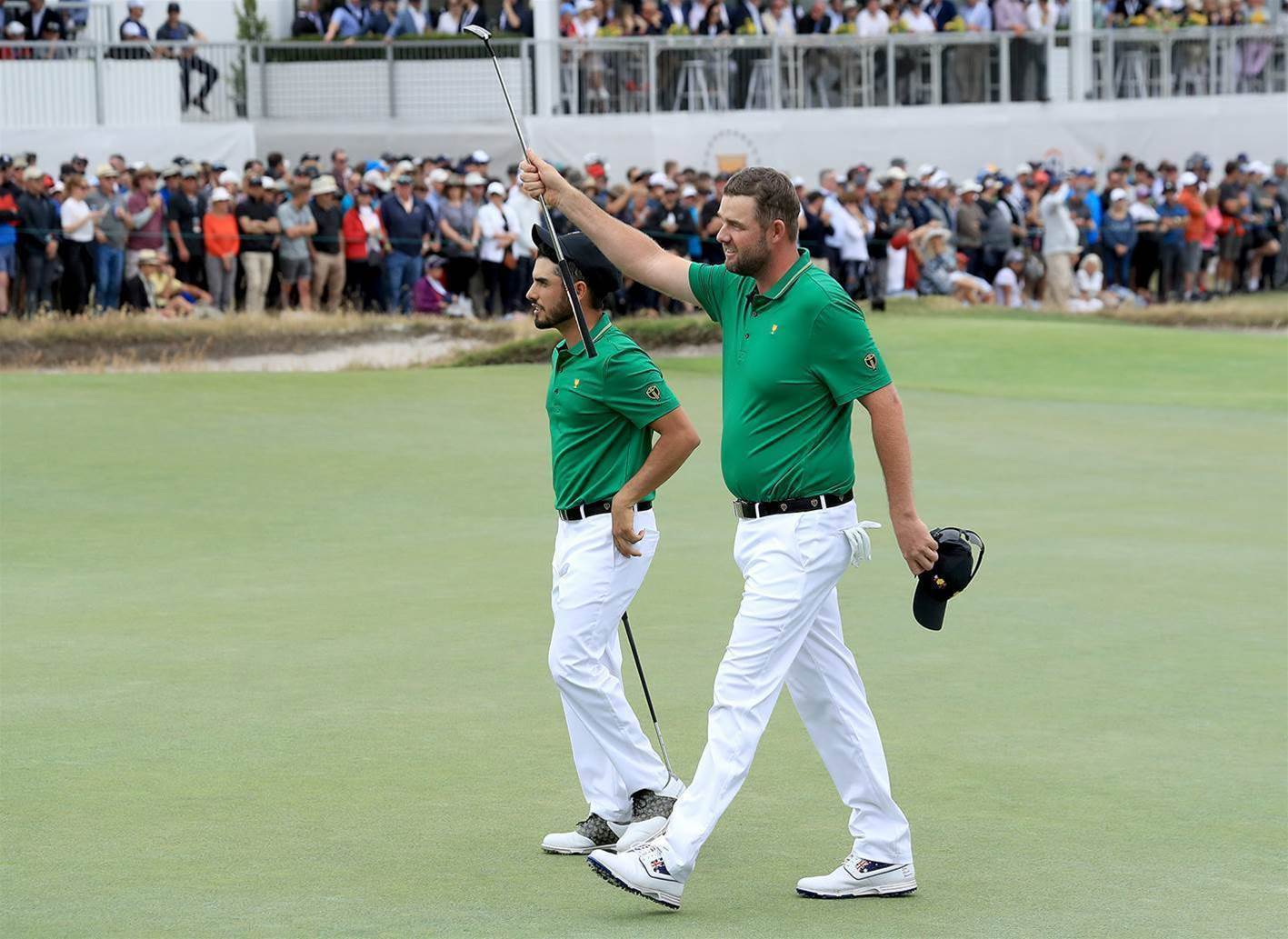 Marc Leishman and Abraham Ancer salute the crowd after winning the second match of foursomes for the Internationals. PHOTO: Getty Images.

Leishman and Ancer carded a rare bogey at the 4th hole and the Americans halved the match. That was as close as they would get. Birdies at the 5th and 8th holes had the International duo 2 up. More birdies on the back nine had Leishman and Ancer cruising at 4 up with four to play.

The Americans staved off the inevitable with a birdie on the 15th to get back to 3 down, but pars for both pairs on the long par-4 16th saw the Internationals win 3 & 2 and grab the second point of the session.

Standing by the 16th green after the win, Leishman paid tribute to his playing partner, who was a little-known player in this country before winning the Australian Open in 2018.

“He’s such a good putter and loves being in the heat of the battle,” Leishman said. “He’s a competitor and that’s what you need to be in this.

“I guess he’s a little more well-known now, but from the outside people probably don’t expect him to win. That’s maybe an asset in something like this. You’ve got to love the spotlight and he certainly does.”

Inspired by a YouTube video featuring former NFL player Terrell Owens, yelling “I love me some me!”, Justin Thomas yelled the same words as he celebrated his match-winning birdie putt to claim a vital point with Tiger Woods against Byeong Hun An and Hideki Matsuyama.

Thomas and Woods were in control early in the fourth match out on Friday, the American pair taking a 2 up lead through four holes. By the time the group made the turn, however, the International pair had fought back, winning three consectuive holes from the 6th before a loss at the 9th saw the match tied.

An and Matsuyama swung the momentum their way at the short par-4 11th hole, the Korean putting his drive close to the hole to secure an easy birdie.

Woods and Thomas hit back at the 13th when the 15-time major winner calmly rolled in a 10-foot birdie putt to level the match. Woods then experienced a rare moment as second fiddle on the golf course as spectator Shane Warne took the crowds’ attention and affection.

Bogies at 14 were followed by birdies at the par-5 next, the real fireworks saved for the final green.

Thomas’ drive sailed right into the wispy rough, where Woods displayed his otherworldly iron play to give his partner a look at birdie from under 18 feet. Never a shrinking violet, Thomas rolled the putt in the hole, later admitting “Tiger gave me a great read” to give the American combination a one up victory and their second win in as many matches.

“I don't know. I'm speechless,” Thomas said on the 18th green. “I've made a lot of for big putts and hit a lot of big shots but to do it with my captain and an unbelievable teammate to win the match and hopefully turn the tide in The Presidents Cup, that was awesome.”

Having trailed Cup rookies Cameron Smith and Sungjae Im for 16 straight holes, Americans Rickie Fowler and Gary Woodland managed to square the final match of foursomes on the closing hole.

Smith and South Korean Im birdied the opening two holes and were 2 up standing on the par-4 16th. But Fowler and Woodland rallied, collecting birdies at the next two holes to level the match and send it up the last.

“I thought we had them there for a while,” Smith said.

“The way they played the last four or five holes was really impressive, two really good guys, and we'll go out there tomorrow and try and get a win.” 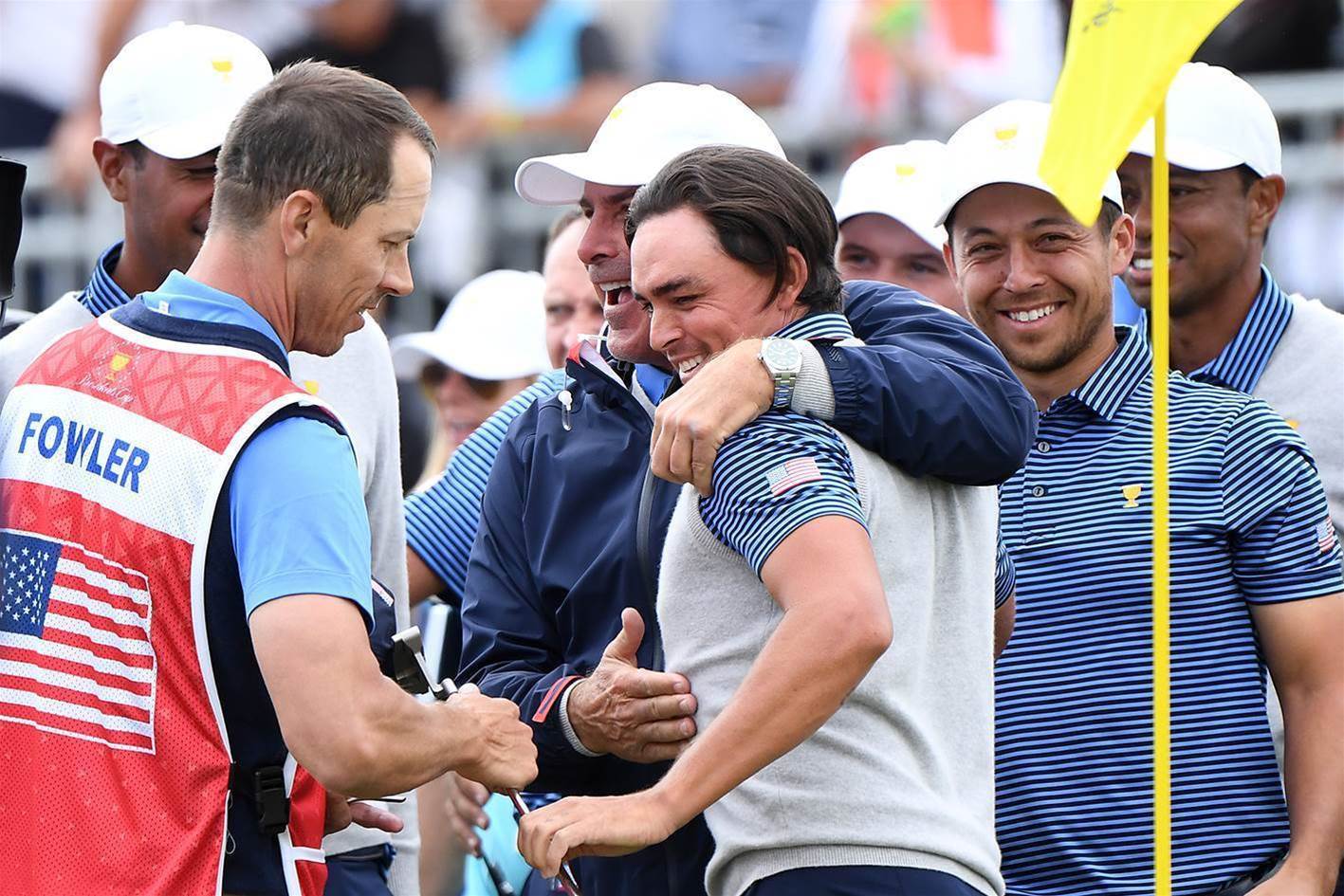 Birthday boy Rickie Fowler is swamped by team-mates after he holed a putt at the last to square the final match. PHOTO: Getty Images.

Queenslander Smith was benched for yesterday’s opening round of four-ball and was eager to make his Cup debut on the Composite Course.

“Obviously we had a really great session (yesterday). I was pumped for the guys, and to go out there today, the 1st tee was really cool. The fans out here have been great,” Smith said.

The Americans, meanwhile, were pleased to square the match after their impressive fightback.

“It's better than a loss, that's for sure. We wanted to keep stretching them. I felt like we gave them a couple holes with a couple three-putts,” Fowler said.