The coronavirus pandemic has effectively forced golf’s professional circuits into hibernation. But the game’s analysts, players and impressionists continue to utilise other platforms to entertain members of the golfing world – one of which includes Twitter. Here are 10 of the best golf accounts in the Twittersphere.

The left-handed, five-time major winner has only been on Twitter for 20 months – but he has already attracted over half-a-million followers thanks to his humorous and insightful posts.

"Lefty" is perhaps best known in the Twitter world for his popular “PhiresideWithPhil” segment, which has recently featured Clint Eastwood, Santa Claus and his father, Phil Sr.

Mickelson also provides various tips, including how to “hit bombs” and “build calves like Adonis”.

Hat, robe, COFFEE for WELLNESS. Who else is ready to watch themselves win the Masters today?

Tune into CBS at 2:30pm ET to watch! pic.twitter.com/xoJfF02poj

The Englishman is probably one of the more interesting personalities on the planet – not just within golf – and Twitter provides him with the perfect platform to share his unique thoughts.

Pepperell has just started recording podcasts with Andrew Cotter, however his 134,000 Twitter followers have been enjoying his refreshing take on the game since 2016.

A year ago today I was gearing up for round 2 at Augusta after a blistering 74 on day one. Already through one courtesy car, I was about to go through another due to a scrape. Little did I know I would make a clutch par this Friday on 18 to ensure a round with Jeff Knox Saturday!

The Queenslander provides plenty of personality and humour with his Tweets (see below). But he also possesses 25-plus years of professional knowledge, which makes him worthy of anyone’s attention.

Hend seems to enjoy sharing his opinions with his followers – and he isn’t afraid to publish honest, bold content.

Everytime my fat guts wants me to go to the fridge I grab a Kettlebell and do some work. I seem to be here a lot. What r u doing to stop eating these days. Post a pic for men's health. @wadeormsby @WarrenSmithFOX @Marcusfraser @PepperellEddie Tag a mate🤷🏻‍♂️🤷🏻‍♂️💪💪��⛳🏌️‍♂️ #Stronger pic.twitter.com/S1fkD6nQoS

The 25-year-old Englishwoman is constantly rewarding her 5,000-plus Twitter followers with thoughtful and engaging posts about life and the game of golf.

MacLaren is an active voice in the equal pay debate and also produces an insightful blog on an array of issues – snippets of which appear via her Twitter page.

While I’m missing real golf I’m trying to do the thing I keep promising myself I’ll do, and write about it (in more than a blog)....
So to try and hold myself accountable, and for anyone’s vague boredom, I’m gonna post little bits on here..... #tourdiariesuncut pic.twitter.com/3RgarXnHxu

The former touring pro turned course architect is one of the most respected voices in Australian golf.

Clayton, owner of eight professional wins, shares his knowledge with over 12,000 followers on Twitter and is also able to make fun of himself (see below).

The American, dubbed “The Scientist” for his methodical approach to the game, is fast approaching 100,000 Twitter followers thanks to the quality and frequency of his posts.

DeChambeau, who won four titles in five months on the PGA Tour in 2018, publishes content almost every day and constantly engages in conversation with his fans.

203 ball speed 👊🏻 Thanks everyone who joined tonight for the stream. With my match, we are donating $1000 to @feedingamerica and are looking to do more of these to help raise even more money. @twitch #twitchaffiliate pic.twitter.com/XJUxQAX3QC

Sometimes controversial, always entertaining, Chamblee offers his 200,000-plus Twitter followers interesting thoughts on the game he has played professionally since 1985.

The Golf Channel analyst is well respected within the golf industry for possessing strong opinions (which he isn’t afraid to voice) on most issues relating to the sport. He also provides plenty of interesting facts and figures about players and tournaments (see below).

The men who have won the most tournaments in a row, the most majors, and the most most majors in one year are inarguably the greatest iron players in the modern era. Much in common: head to the right at impact, pressure tracing the outside edge of the lead foot,& trail heel up. pic.twitter.com/B65CqQjOT2

This humorous Twitter account pokes fun at the eight-time European Tour Order of Merit winner and has amassed nearly 30,000 followers since it was established in 2013.

Montgomerie himself has publically declared his fondness of the account and eventually “followed” it in 2017.

#Mastersmemories. Just as I was about to embark on complete world golf domination, this shite showed up. All credit to Tiger. pic.twitter.com/J99DNULjD6

Most golf fans are familiar with the World No.71 and his Twitter account thanks to his light-hearted swing analysis videos.

The American has become hugely popular for critiquing amateurs’ swings (see below) and is approaching 150,000 followers.

Homa has also started recording podcasts with Shane Bacon to provide an insight into the PGA Tour and poke fun at his peers.

Switch to an interlock or overlap grip and get a great financial advisor cuz he’s gunna make a bunch of money in the future https://t.co/vBDww0YuW9

The two-time Open champion has really ramped up his Twitter activity since the world’s Tours were suspended due to the COVID-19 pandemic, frequently posting terrific video tips and helpful pointers (see below).

Harrington has dubbed his videos “Paddysgolftips” and has quickly grown his audience to 147,000 followers.

How to hit a flop shot and also the house. @europeantour @pgatour #golfathome #paddysgolftips. pic.twitter.com/nariePycDC 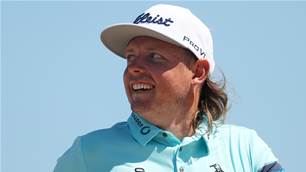