It began as a concept for a private member-only golf course in the heart of Victoria’s Mornington Peninsula, but a significant chain of events has seen it evolve into one of the best public access layouts in the nation.

Designer Tom Doak’s second Australian design behind Barnbougle Dunes promised to be something special when it opened in 2005.

It was, and 15 years on St Andrews Beach is widely popular and critically acclaimed. The American enthused about the project well before the first golf balls were struck across the Mornington Peninsula property.

Like he had done at Barnbougle Dunes, Doak collaborated with Mike Clayton on the project, which was originally known as the Gunnamatta Course at St Andrews Beach and was being developed by Golf Club Properties Limited (GCPL).

Doak originally designed two 18-hole courses – the exclusive members-only Gunnamatta Course and a second public access layout, the Fingal Course. The existing Gunnamatta Course opened in 2005 but the Fingal Course was never completed before GCPL was wound up with debts of $46 million. Gunnamatta closed in early 2008 after it was purchased by a Chinese investor. However, it reopened as St Andrews Beach in October that year with Melbourne-based company, Golf Services Management (GSM), at the helm and its tumultuous beginnings were well and truly left behind. In January 2009, Golf Australia magazine had it ranked among Australia’s best courses and it has been there ever since.

And it’s no wonder. Doak created a course incorporating plenty of space, making it very playable and enjoyable for all golfers. The punchbowl surrounds of the 13th green are receptive at the end of a 457-metre par-4. PHOTO: Brendan James.

For the better player, the key is in the playing lines from the tees and the angles those lines subsequently leave into the greens. Some holes are wide open and exposed; others funnel between dunes or between stands of untouched vegetation. The bunkering is wild and rugged, while the green complexes gather or repel a bouncing approach shot depending on the line of attack.

“The land at St Andrews Beach was so good for designing a golf course that it became difficult to decide which holes we couldn’t build,” he said. “There are natural golf holes laid out there of all shapes and sizes but we could only use the two best combinations of 18.

“In some cases, we just had to find the right spot to put a green, locate the nearest high point near that green to put the next tee and the following hole would present itself.

“I can’t help but feel that Alister Mackenzie would be mad that he never got the chance to design a course on land this good.”

Doak is renowned as a minimalist designer so it shouldn’t come as any surprise that the transformation of St Andrews Beach, from a series of degraded paddocks into an acclaimed golf course, was apparently an easy one.

“While we recognise that not every site lends itself to a minimalist approach, our favourite projects are those where we can find natural holes just lying on the ground, requiring minimal disturbance to build,” Doak says.

“Of all the projects we have built so far, St Andrews Beach required the least artificial work: other than softening greens contours and digging bunkers, only three holes required any earthmoving at all.”

“… Of all the projects we have built so far, St Andrews Beach required the least artificial work.” – Course designer Tom Doak

Doak’s old-school design philosophy where you simply tweak Mother Nature’s design has given rise to some outstanding holes at St Andrews Beach, and an overall course that has not been built to meet any “modern standard”. It is a par-70 and stretches to a relatively short, by today’s lengths, of just 6,074 metres. For Doak, if the land accommodates a 270-metre par-4, that’s what goes on the scorecard. He won’t bulldoze a sand dune to add another 100 metres.

“When I was visiting all the courses that ended up in my book (The Confidential Guide to Golf Courses), I realised that all the great courses – St Andrews, Royal Melbourne West, Kingston Heath, Cypress Point – have at least one good short par-4,” he said.

“This is what separates the cream from the crop, and I try to keep these short holes in my designs.”

The best short par-4 at St Andrews Beach comes early in the round. From an elevated tee, the 279-metre 2nd hole doesn’t hold any secrets. There is high risk-and-reward for taking on the bunkers that cut into the right side of the fairway as it climbs toward the green from the valley in front of the tee. Clear the traps and your drive could finish on the green as the land contour beyond the sand feeds balls onto the putting surface. A scheme of wasteland bunkers and a high sand dune flank the left edge of the fairway.

One of the most spectacular holes on the course is the 169-metre par-3 6th. Depending on the direction of the breeze, you may need a mid- or long-iron to reach the elevated putting surface that lies between thickets of tea-tree in a natural bowl and is protected by bunkers carved out of the mountainous sand dune short of the green. The St Andrews Beach layout also highlights Doak’s readiness to tuck a green behind some dunes or find a plateau at the end of a fairway if the land allows that.

“The worst thing a designer can do is over design,” he said. “There were natural green sites available on this land, so we used them. Sometimes that meant leaving a small green beyond some banks or in a natural amphitheatre.”

The second of the short par-4s – the 276-metre 14th – is one such hole. The tiny green – by modern standards, sits at the end of a wide, split level fairway – is surrounded on three sides by dunes. The right side of the putting surface features a steep drop off, which can repel a mis-hit nearly 15 metres down a hill into high, wispy rough. This is a wonderful hole that can be played three or four different ways and all result in the same score.

You won’t find this hole, or any of the other 17 holes, anywhere else on the Peninsula or anywhere else in the world for that matter. Like great art from the masters, St Andrews Beach is an original that should be experienced at least once in your golfing lifetime.

MEMBERSHIP: St Andrews Beach doesn’t have a traditional membership but it offers a Season Pass. All Season Pass holders have full seven-day access (year round), an official Golf Australia handicap, personal liability insurance and exclusive access to St Andrews Beach events and competitions. All this for an annual fee of $2,495. To secure your season pass, call (03) 5988 6000. There are also Lifestyle Passes and Partner Passes available, check the website for details. 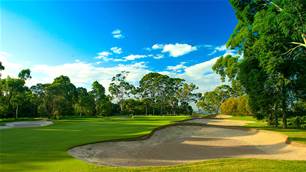