Adam Scott's quest for a third UNIQLO Masters title is off to the perfect start, but he says there is still room for improvement, writes Brendan James

THE FAT lady hasn’t sung yet, but someone should tap on the dressing door and tell her to start warming up.

One round in and Adam Scott’s quest to win a third UNIQLO Masters – and his first at the traditional home of the event, Huntingdale – is on track, which is an ominous sign for remaining 119 players in the field. 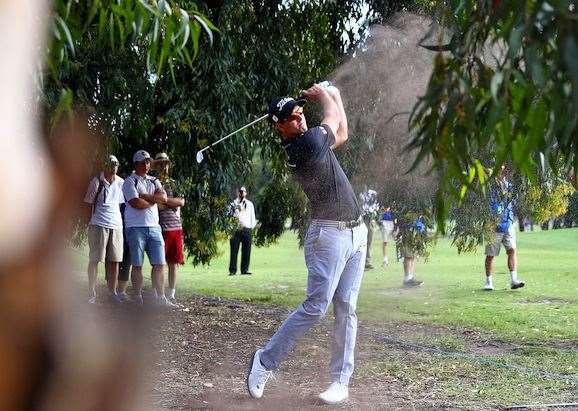 Adam Scott plays an escape shot on the 10th hole, his first of the opening round. PHOTO: Scott Barbour/Getty Images.

Playing the tight layout in benign conditions, Scott signed for a seven under 64 for a one-stroke lead over recently crowned WA Open Champion Daniel Fox, who birdied his last five holes for a 65. Victoria’s Peter Wilson, Matt Stieger of NSW and Tasmania’s Mat Goggin are a further two shots back at four under. Only 27 players in the field of 120 finished in the red after day one.

With the wind picking up in the afternoon, good scoring became increasingly difficult. Steven Bowditch, the second favourite to win the gold jacket, struggled to a six over 77 and will need to emulate Scott’s first round tomorrow if he is a chance to play this weekend. Another favourite, fellow Queenslander John Senden, battled hard for his 69 to be five shots back of Scott.

Scott may only lead by a single shot but it was the measured manner of his play that suggests he didn't really get out of second gear in carding a 64.

"I played really solid so it's nice to see a little bit of the work I've been doing over the past week and early this week fall into place in a tournament situation,” a smiling Scott said.

"It's a dream start and hopefully something to build on from here." 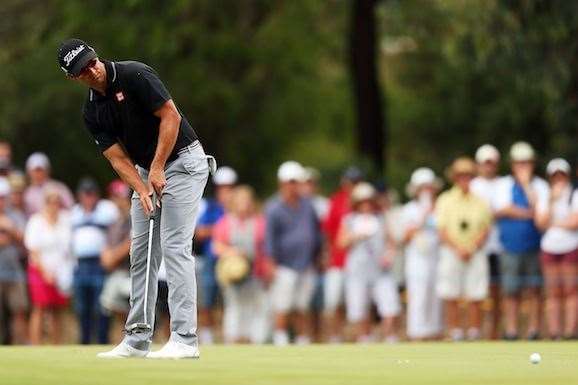 Scott's putting was superb, which he hopes will help taking the pressure off his long game PHOTO: Graham Denholm/Getty Images.

With the exception of two mis-hits early in his round, the Queenslander was close to perfect as he rolled in seven birdies, five of which came in his closing eight holes.

“It was pretty stress‑free golf,” said Scott, who looked as fresh at the end of his round as he did at the start.

“Like in all rounds, a couple things happen. I pulled my drive off the 1st but it kind of went through the trees and was fairly playable, and I just pitched out to 30 feet right of the hole and two‑putted. The ball could’ve just roll up behind a tree and it changes the way the whole day goes.

“Those are the breaks you get. You get good ones and bad ones. You've got to take advantage of it. From there, I played really nicely and very sensibly and just tried to give myself a lot of looks at it. So, it was pretty stress‑free.”

Dodging a bullet early in his round with a good par save at his second hole (the par-4 11th hole), Scott says it put him in the right frame of mind to put a good round together.

“I've played a lot of rounds where lots of different stuff has happened … today I hit a poor shot into the 11th and wasn't quite in my rhythm with the swing yet and made a good save.

“And it's funny how walking to the 3rd tee of the tournament at even par feels a lot better than walking there one‑over. There's such a thing with even par, under par and over par in the mind‑set of a player.

“I hit a lovely shot into 12 (his third hole) and the rhythm started happening and I made a nice putt, and continued to hit good putts on the back nine.

“They just didn't go in. I made a long one on 16. And then finally got a few more to go in around the front.”

The ease of Scott's 64 can be attributed to a conservative game plan from tee to green and growing confidence using the short putter he adopted less than a month ago.

“I don't think I challenged the course very much,” the World No.12 said. “But we had really nice conditions to play this morning. There was no wind, and weighing everything up, there was no need to challenge it.

“You were going to hit a lot of fairways with irons and have pretty straightforward iron shots into greens. The greens were still soft and it was right there for the taking this morning.”

And the short putter is working for now, thanks to some hard work away from tournaments when he decided to use a conventional length putter a few months back. 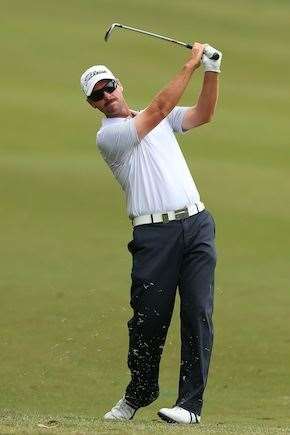 “When I decided to use it (the short putter), I committed this is what I'm going to do and I'm going to putt like this and work at it and try to be the best putter in the world, like I try to be in every aspect of the game. That's what I'm committed to,” he said.

“I think the only way to go about it and compete at a high level is commit to something.

“I feel like it's in a good spot. I putted well all the weeks that I've used it. I'm sure I'm going to have a week where I don't putt that well. But hopefully there are more good weeks and the confidence continues to build.”

A by-product of Scott’s transformed putting stroke is there is now less pressure on his long game to get the ball closer to the hole, all the time.

“I think you always walk off feeling better, no matter who you are, if you've made a few putts,” he said. “You can walk off the course feeling good shooting over par if you've made a few. Wouldn't have been pretty if you didn't. It is such a big part of the game. There is a big focus on it.

“So, for me, right now, it's a positive. I didn't putt well at all this year with the long putter. My stats were horrible and it was a very frustrating year. So, the change has actually been quite refreshing for me.

“The little bit where my long game struggled this year, hopefully with some new confidence with the putter, that will take the pressure off that and that can come back to where it needs to be.”

This suggests there is room for improvement for Scott. Is that the fat lady I hear clearing the pipes?