Circling the carpark to find the last available spot was the first indication and the energised throng of members on the putting green and filling almost every available space on the driving range in the distance on a glorious July winter’s day confirmed all suspicions.

Following an extensive renovation that saw the Arnold Palmer-designed course close in the first week of January, play at The Pines at the Sanctuary Cove Golf & Country Club was back seven months later and the members were most definitely, lapping it up.

Maintaining the Palmer legacy and ensuring their premier course retains the highest of conditioning standards was behind the commitment to the largest capital investment in The Pines layout since opening day in the late 1980s, as club General Manager Paul Sanders explains.

“The Arnold Palmer Design group provided us with a masterplan for upgrades to The Pines when they were last here in 2018 and we’ve been working over the past few years on how we could complete the renovation in a way that had the least impact on the members.” 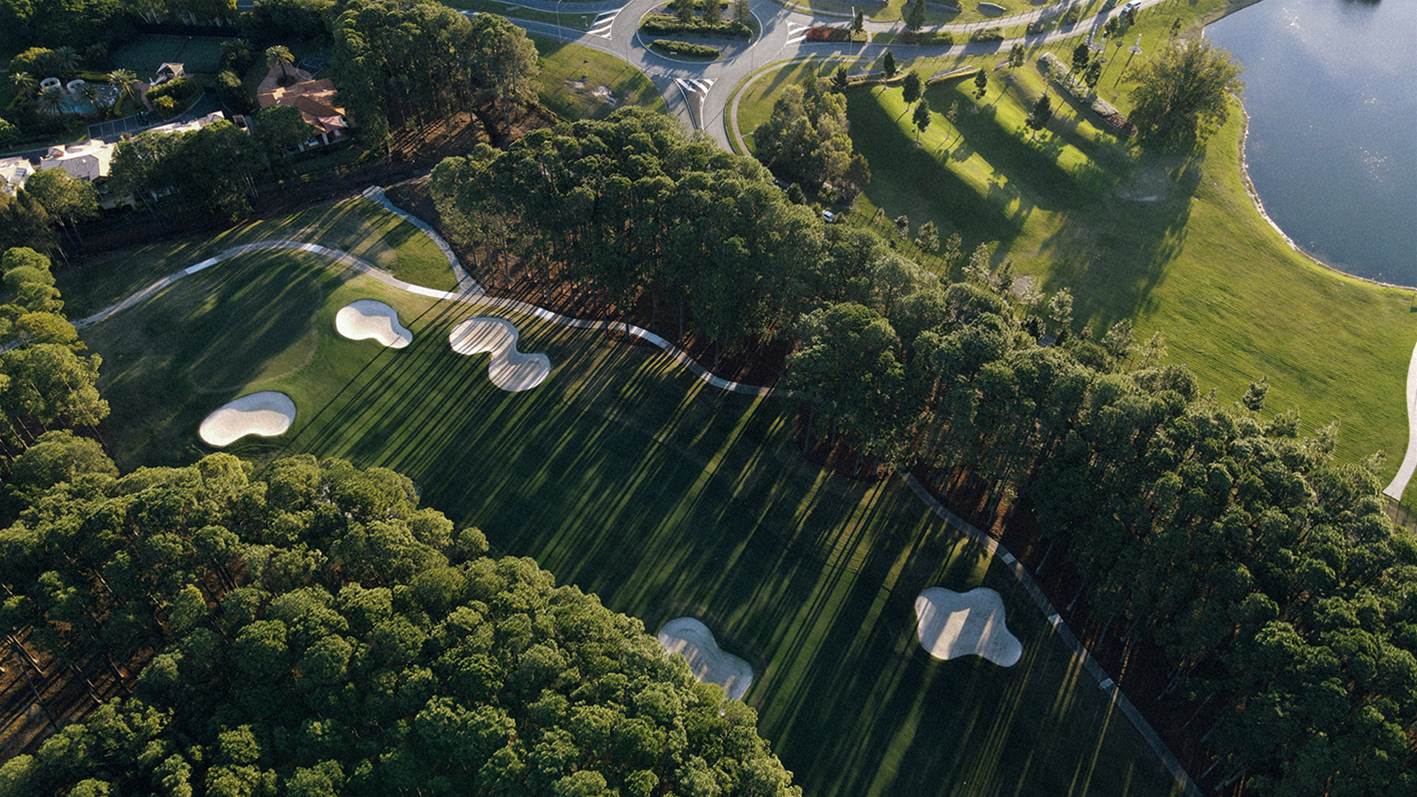 The onset of the global pandemic, of course, turned the world on its head and the club made the decision during all the uncertainly about community transmission to close public access to their neighbouring Palms course. A window of opportunity to cost and commit to works on The Pines while members had unfettered access to The Palms was seized upon, with the first ground broken on the project in early January.

Sanders admits that there was more than a single catalyst for the club’s board to take action but the primary consideration was the steady decline in course conditioning that was detracting from the playing experience, despite the ever-increasing cost of upkeep.

“The front nine greens and in particular those that were shaded, the Bermuda grass had had enough. It had hit its lifecycle.” Sanders said “And then once we started digging the greens up, it was clear that what was built 30 years ago wasn’t fit for purpose moving forward in terms of drainage and soil profile.” 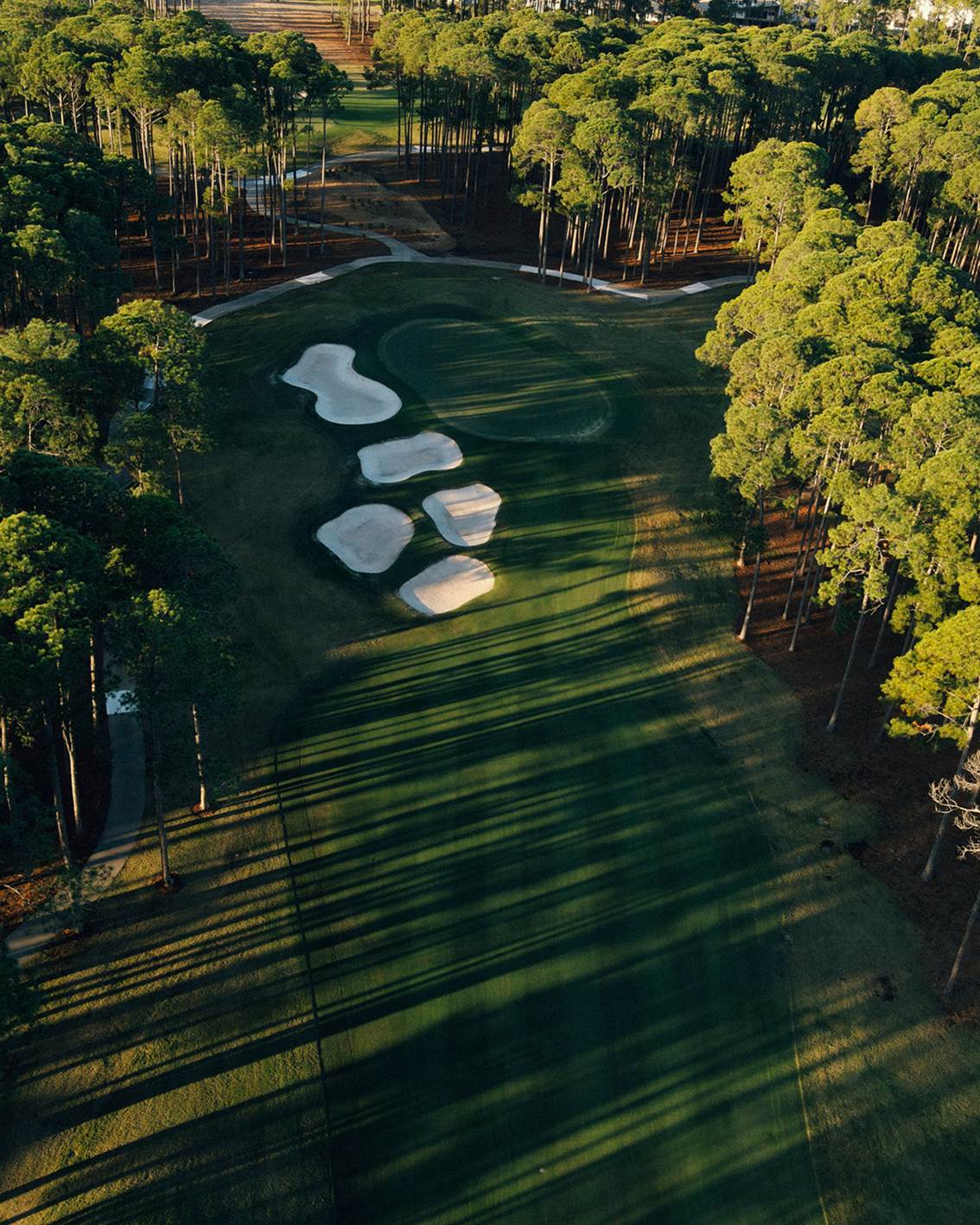 With that in mind, every green was stripped back to base and each has undergone a full USGA green specification rebuild. All greens now have the same drainage per square metre and drain at a thousand litres an hour, perfect for the seasonal rainfall patterns experienced on the Gold Coast.

Central to the renovation was the choice of TifEagle ultradwarf hybrid grass for the putting surfaces, the same grass used on the neighbouring Palms layout. The club had carefully tracked data for three years comparing the upside of the TifEagle on The Palms with the Bermuda on The Pines.

“We feel that the TifEagle is perfect for where we are,” Sanders said, “For whatever reason, the TifEagle loves this climate. They don’t like to be over-renovated or over-watered, they just like to be left alone with some light de-thatching and dusting. That’s it.”

“The Palms greens were around a third larger than those on The Pines prior to the renovation. Even though The Pines greens were smaller, they were costing us 40 percent more to manage and maintain so there was a massive efficiency for us to go and grab.”

Sanders emphasised that an imperative for the club and its members was to ensure the new greens retained the same characteristics of the original Palmer specifications. What the club set out to do was most definitely a ‘renovation’ project in accordance with the masterplan, not a ‘redesign’ that has affected the routing and layout of the golf course in any way. 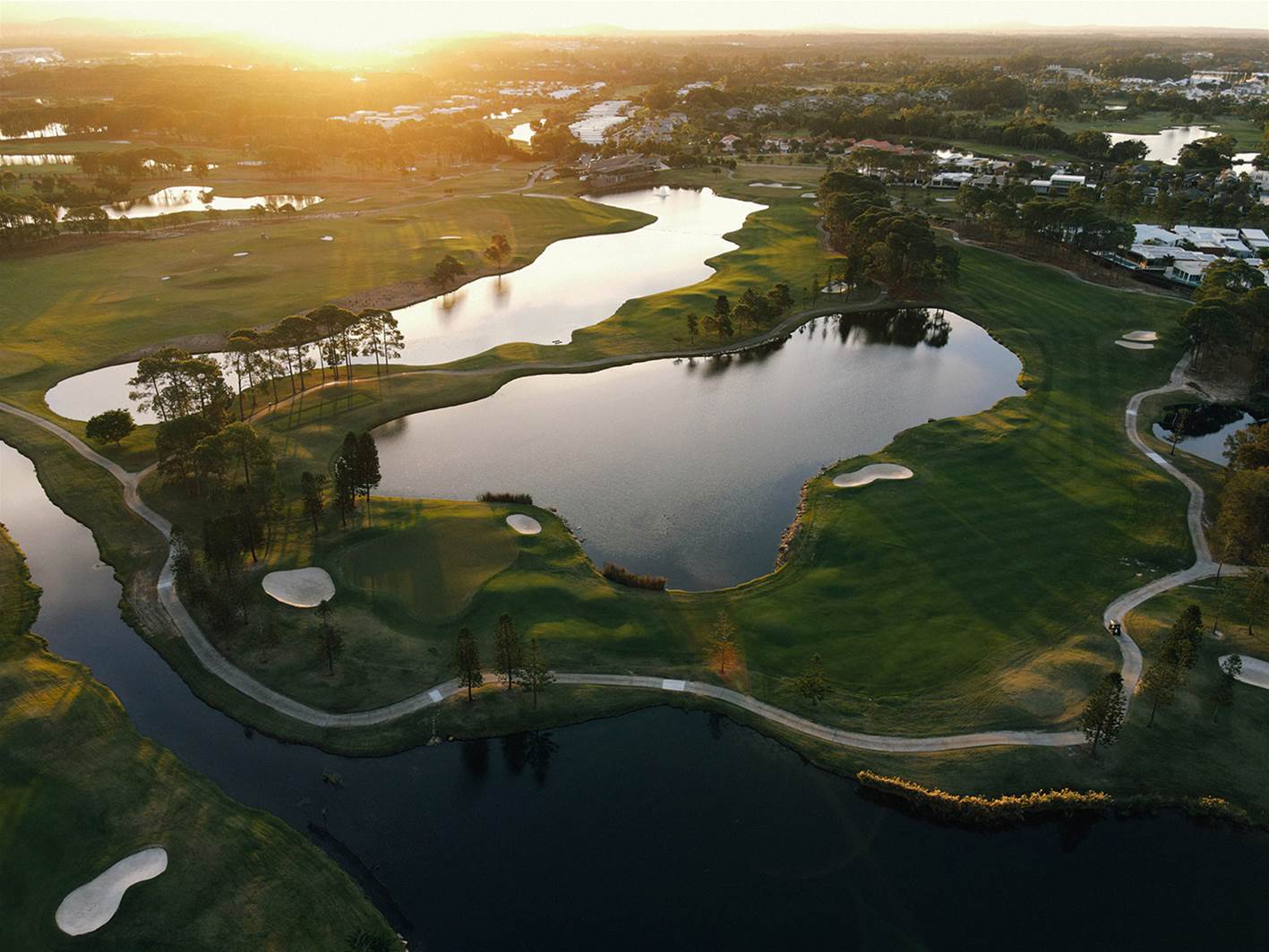 The par-5 17th with the testing 18th hole and practice areas in the background. PHOTO: Supplied.

“The greens were surveyed pre- and post-build and we had to get them to within plus or minus five millimetres (of the original contours). I have to give credit to Jim Norfolk and the team at Atlas Golf Services, they have been incredible to work with and have done an amazing job.”

In addition to restoring up to 25 percent of the original green surface areas lost to grow in, Sanders said the Atlas team had delivered exactly what they said they would, to get the greens back to within such tiny margins.

“When you go and putt on the greens now, you can’t tell the difference as they still subtly break the same way as they always have. We worked in some of the bunkering recommendations from the masterplan into the recent work – adding two bunkers on the par-5 17th hole along the left of the fairway from the tee and one at the green.”

Prior to this most recent tranche of activity, the club had earlier completed a project to re-line every bunker, adding a full porous solution to the foundations to arrest drainage problems. Sanders explained that with over 100 bunkers that had not been drastically altered in over 30 years, the greens staff had been forced to spend considerable time restoring bunkers after every significant downpour. 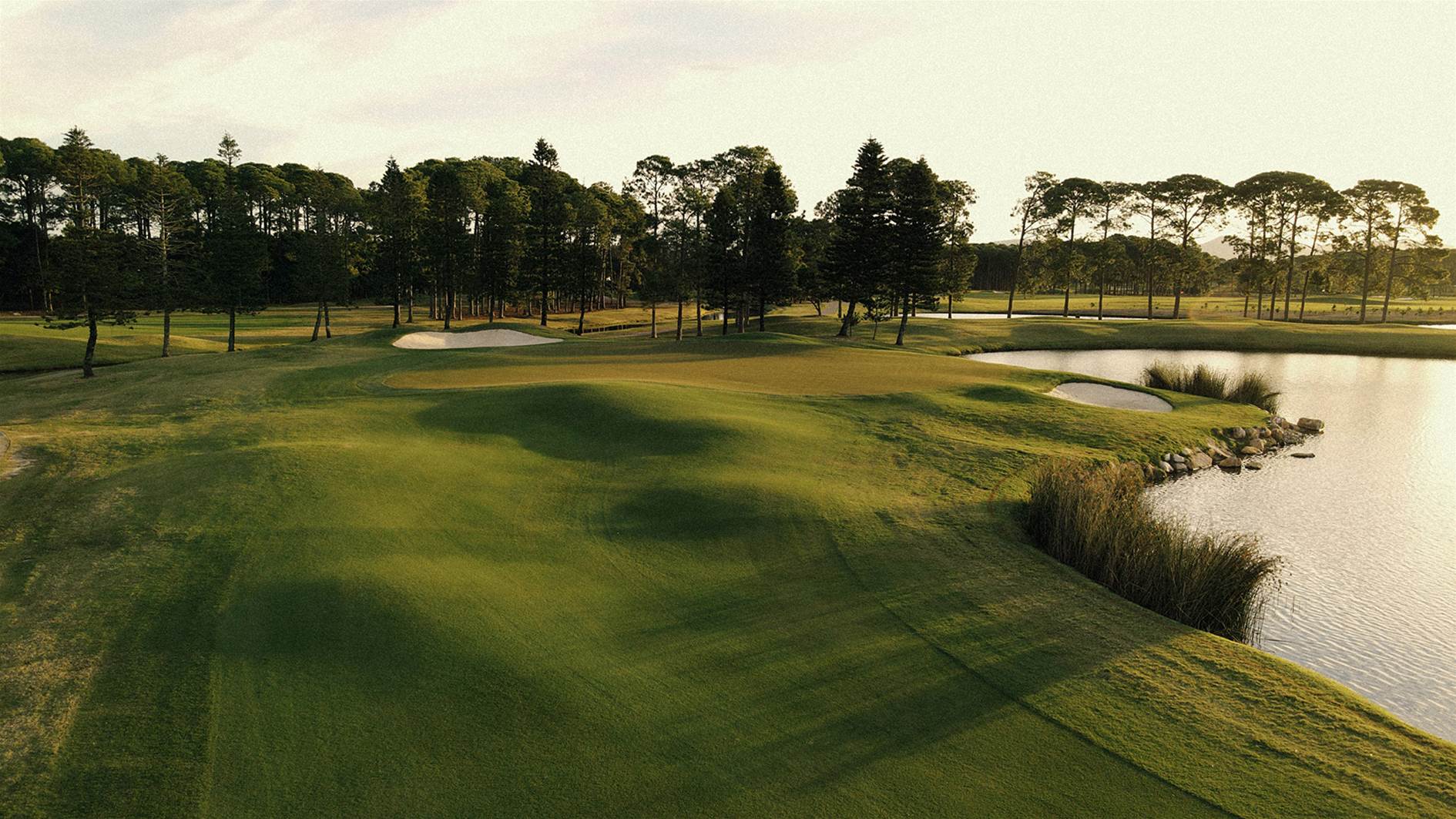 “We now have zero drainage problems. We don’t do anything after rain periods but go in and hand rake the bunkers. That provides us with a huge return in investment because we have eight or so green staff who can spend time doing so many other jobs to ensure the playing surfaces are at their best.”

Emboldened by the experience at their ‘sister club’ at the Bay Hill Lodge – Arnold Palmer’s Florida home for many years – the collars around each green have had a metre-wide strip of Zoysia grass installed butting up to the TifEagle which, as Sanders explained, is designed to combat the age-old problem of grow in.

“The Zoysia and TifEagle will not encroach into each other so it’s simply a matter of us replacing the Zoysia collar every few years when it reaches its use-by date. We’d lost something like 25 percent of our green size so as you can imagine, we’ve now got considerably more pin positions at our disposal and want to keep it that way.”

Re-using soil material taken out of the greens, Norfolk’s team and the green staff rebuilt all the tees and created some larger teeing grounds to reduce maintenance, wear and tear and in some cases, create slightly different angles of attack.

The most tangible example is at the par-3 13th, which features an heroic water carry well known to all who have played The Pines. The forward teeing grounds have now been raised and expanded considerably to the right of their former location.

New target greens and white-face artificial bunkers on the double-ended practice range and a regenerative pine tree planting program have further elevated the Pines experience, as have the new green irrigation systems which feature grass caps instead of metal sprinkler covers to improve aesthetics.

Playing The Pines alongside Course Superintendent Paul McLean, Norfolk and Golf Operations Manager Ryan Gailey eight days after re-opening, we all agreed unanimously with Sanders’ conclusion that the condition of the course is ‘off the charts’ and, as McLean noted, is only going to get better with a growing season under its belt.

This was the first occasion McLean and Norfolk had played the golf course since it re-opened and it was a treat to watch the satisfaction and excitement they derived from how the course was playing – how shots were reacting into the new surfaces from the fairway and around the greens, how putts were rolling and the turf was bedding in – not to mention the general presentation from tee to green which the members have been so overwhelmingly positive about. 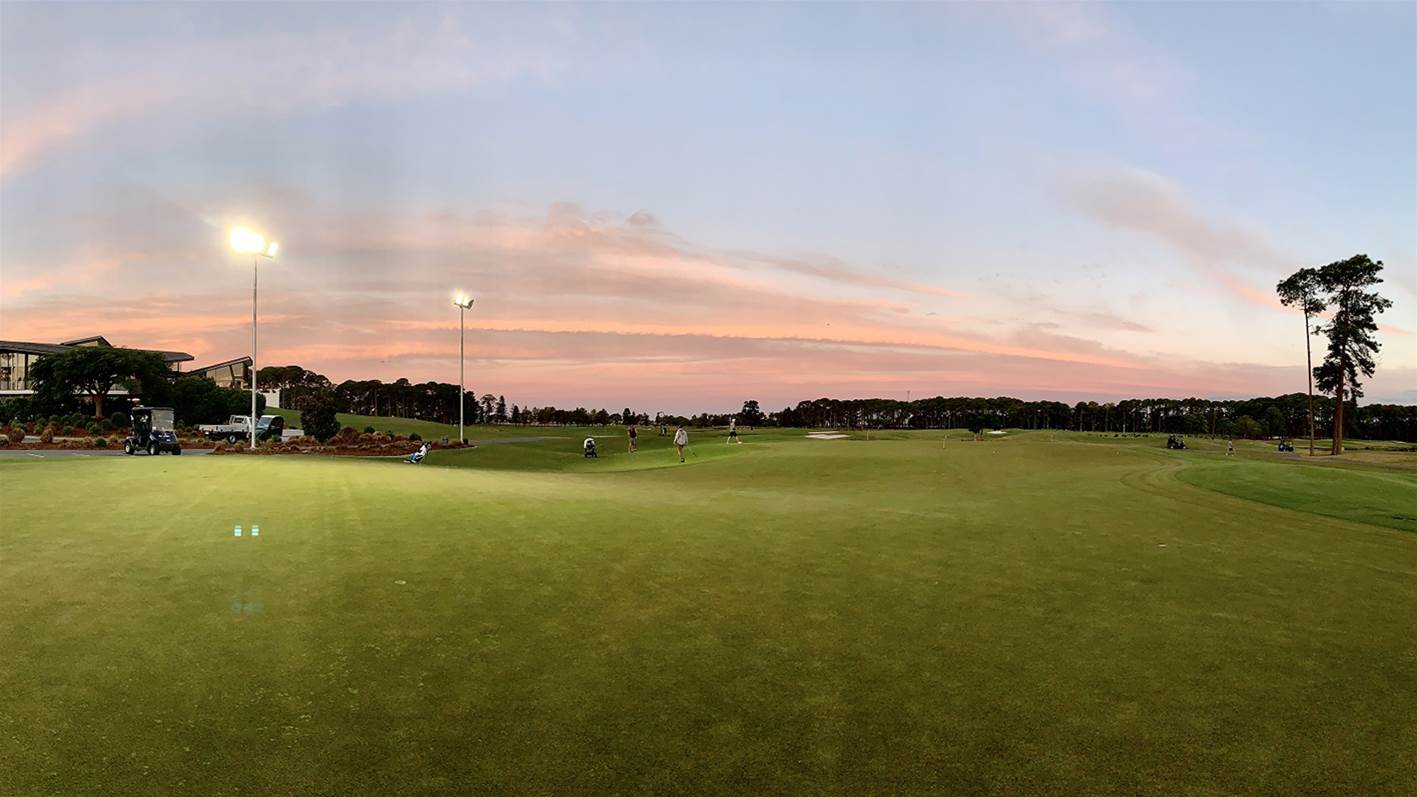 All going well, 2023 will likely see the remaining bunker recommendations from the masterplan implemented before attention is turned to further upgrades to The Palms course, itself now 11 years removed from the last major alternations completed by course designer Ross Watson.

For the time being, however, the club’s priority is to allow members the time to enjoy the fruits of the $5 million that has been injected into The Pines over these past few years.

“We took Phil Scott (Adam’s father) out for a drive prior to the re-opening. He’s been here since day dot and he hasn’t seen it like this for a long, long time,” Sanders added.

“After more than six months waiting, the members were chomping at the bit to get out there. The feedback we’ve had suggests to us that membership pride and that sense of value of being a member here is at an all-time high at the moment.”