If you have never played golf in Perth, the first thing that will surprise you when you do get around to it is just how good the land is there for golf.

The West Australian capital’s most acclaimed courses – including the likes of Lake Karrinyup, Mt Lawley, Cottesloe, Sun City and Joondalup – all lay on beautiful, gently undulating sandy terrain north of the Swan River. You can also add Royal Fremantle Golf Club, just south of the river, to that elite line-up.

It is difficult to grasp the notion that a course which has occupied the same wonderful golfing land for more than 115 years can be regarded a ‘hidden gem’ but, in many respects, Royal Fremantle does tend to avoid the limelight on the national stage.

But course improvements carried out in recent years, and with more to come, has the club eyeing a permanent ranking spot in the Top-100 Courses in the country. Only a handful of points separated Royal Fremantle from making our list in January 2022. But with the West Australian border reopening after nearly two years, and more judges able to witness the recent improvements to the course, this classically designed layout will be a strong contender to move into the Top-100 in 2024. 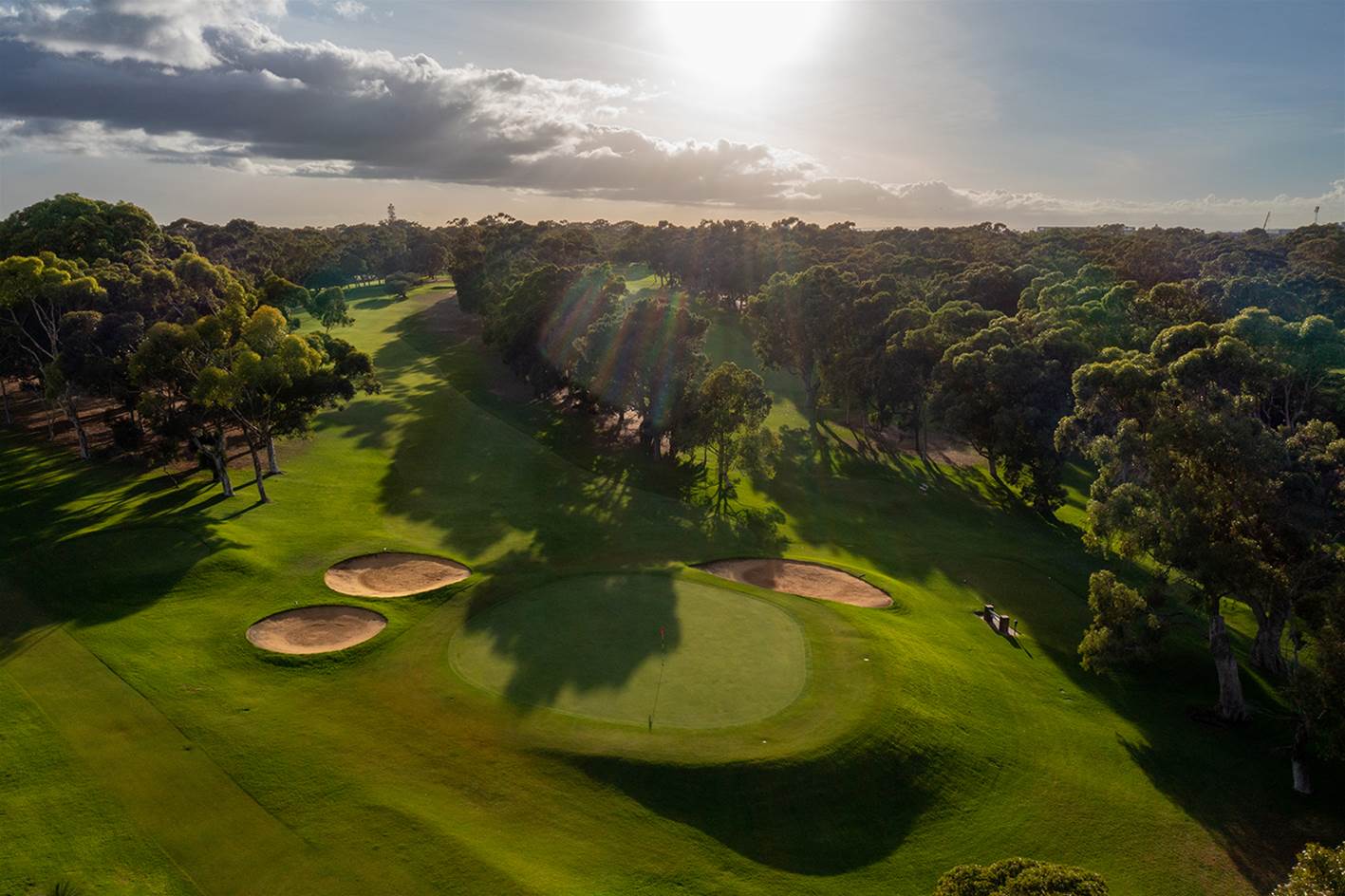 If that happens, it will be an incredible achievement for the oldest 18-hole course in Western Australia.

The first golf was played on this site in 1906, making Royal Fremantle one of the oldest clubs in Australia still on its original site. The club’s first captain, Arthur Oliphant, and Peter Anderson, who was the headmaster at Scotch College at Claremont, laid out nine holes one Sunday afternoon.

The Scottish-born Anderson was more than an educator though. He won the British Amateur title in 1893, defeating Johnny Laidlay, a two-time winner of the championship, 1-up in the final. Anderson, who once held the course record at St. Andrews, later emigrated to Australia and consulted on the new site for the Royal Melbourne Golf Club and later, Barwon Heads Golf Club.

Anderson obviously knew his stuff but he could hardly have foreseen the difficulties that would affect construction at Fremantle, like the blasting of the limestone cap rock that laid just beneath the sandy surface across the site.

Such problems didn’t dampen the enthusiasm for the club’s members and a further nine holes were built within three years. 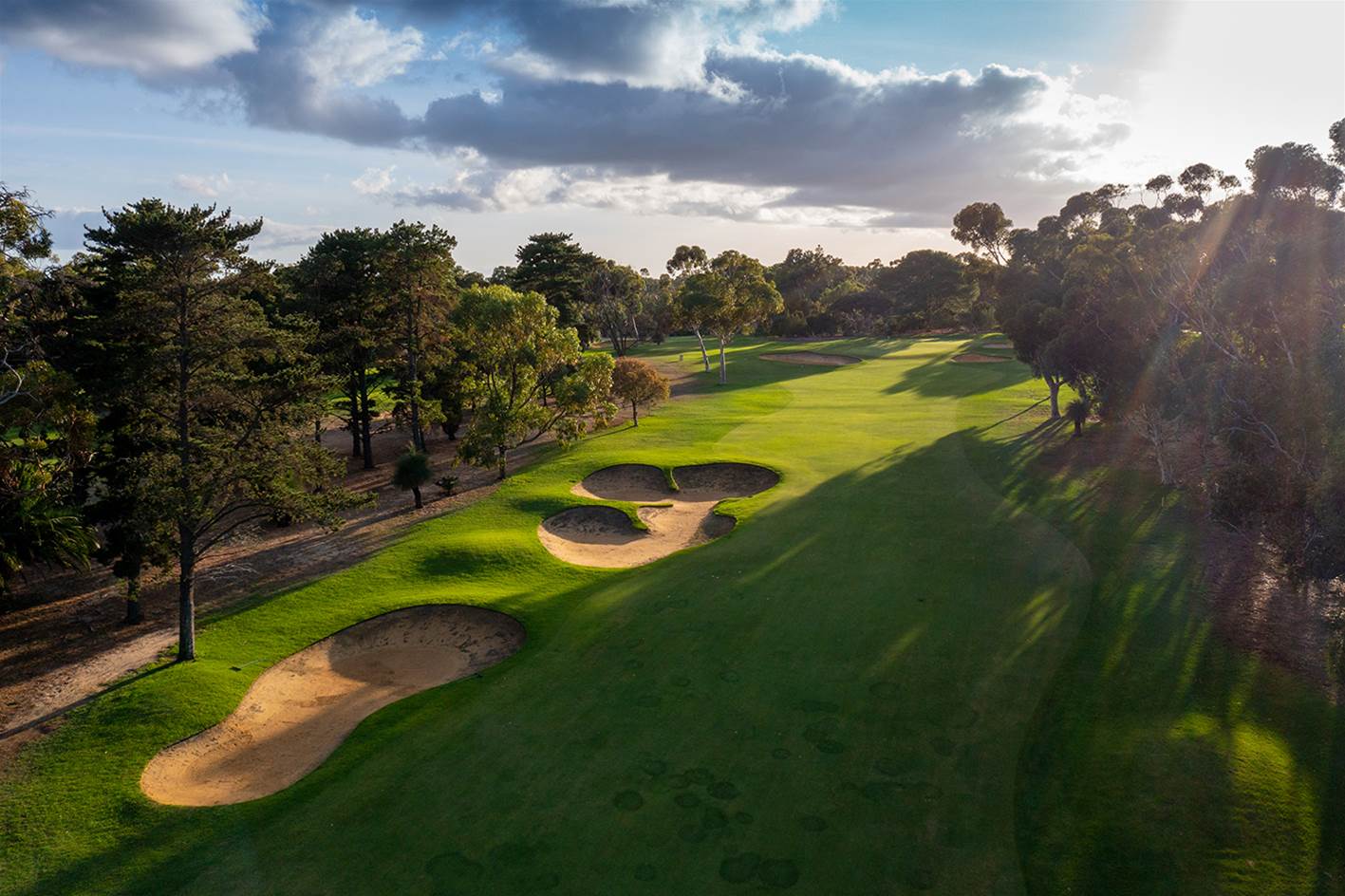 King George V granted the club the ‘Royal’ prefix in 1930 and over the next 70 years, trees grew to frame its holes and the layout’s design was regularly tweaked, including the introduction of a new 16th and 17th hole in the late 1960s.

The course was lengthened and the greens rebuilt in the early 2000s, with Perth-based designer Michael Coate overseeing the changes.

Then, in 2013, course designer Richard Chamberlain was commissioned by the club to provide a masterplan for the course. Two greens – the 2nd and 5th – have since been redesigned as a part of the plan, while a program of converting all the putting surfaces to Pure Distinction bentgrass is more than halfway completed.

The par-72 plays longer than its 6,188 metres from the tips, simply because of the undulating topography and your drives don’t run too far on the lush kikuyu grass.

Combine this with the fact almost every hole, with the exception of the par-3s, turn either left or right, creating a myriad of shots that must be played from a variety of lies to score well. 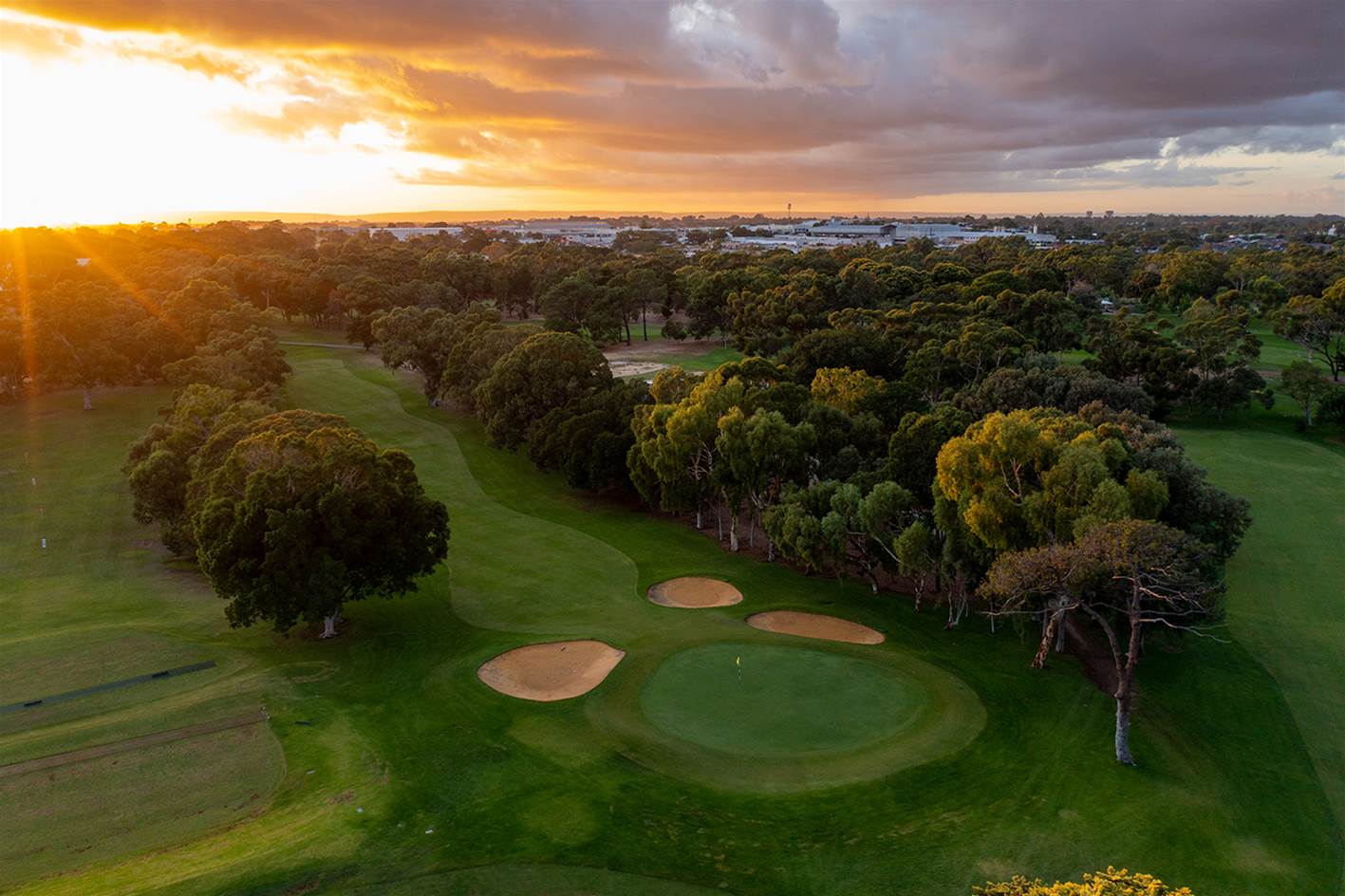 Bearing all this in mind, it is hardly surprising the high quality of player that has honed their ball-striking at Royal Fremantle like Dennis Bell, Craig Parry and Greg Chalmers or the calibre of player that has triumphed in one of the 21 West Australian Opens hosted by the club, since the inaugural championship, in 1913. Clyde Pearce, an Australian Amateur and Open Champion, claimed the first and since then the likes of Dan Cullen (1937), Eric Cremin (1949-1954), Terry Gale (1980) and Daniel Fox (2015) have tasted victory here.

"Having been brought up on kikuyu grass fairways in Sydney, I thought Royal Fremantle’s fairways are some of the best I’ve seen..." – Brendan James.

There is also the club’s incredible recent record of producing world class players. Oliver Goss, low amateur at the 2014 Masters (and now the club’s junior development officer), and successful brother-sister touring pros Min Woo and Minjee Lee, all learned the game at Royal Fremantle. As did gun amateur Hayden Hopewell, who won the WA Open title on his home course a few years ago.

A round at Royal Fremantle opens with an impressive par-4. The elevated tee leaves little to the imagination … it’s a relatively straight two-shotter of 386 metres where the fairway descends into a valley and rises again up to the green. A fairway bunker to the right of the fairway is best avoided if you want to start your round without a blemish. This bunker could be even more intimidating if the fairway was widened to incorporate the bunker into the fairway. The short rough that surrounds the bunker at present would no doubt stop plenty of balls rolling into the sand. Fairway bunkers in the rough with the fairway cut around the sand is pretty common for the remainder of the round.

I really liked Royal Fremantle’s collection of shorter par-4s. All of them are pretty tight with tall timbers on all and the canopies of said trees narrowing the playing lines even more. That said, straight hitting is rewarded so if you want to play aggressively, especially on these shorter holes, a few birdies might be offset with some bogeys and double bogeys.

The first of the short two-shotters is the 314-metre 5th – a sharp dogleg left where you have two options from the tee. Long hitters can blast a driver over the top of the trees toward the green but it must be really high and long and is a huge gamble. Laying up is also fraught with danger as a scheme of bunkers lies through the end of the fairway. The relatively new green – guarded by two bunkers, short left and left edge, and tightly trimmed surrounds long and right – has more movement than the one it replaced, making it a more interesting challenge.

The toughest of the short two-shotters is the 323-metre 15th, known as Ingrams Crest, where finding the fairway from the tee is an absolute must. The tee shot is played blindly over the crest of a small rise, which is just enough to obscure the sight of a lake that lies to the right of the fairway. A long drive leaked to the right is a chance of finding the water here. The key to an approach here is to get your club selection right and commit to the shot. The edge of the lake cuts into the fringe of the bunkerless green, while a slight over-club to avoid the water can see your ball repelled away from the putting surface by close mown surrounds, leaving a nerve-wracking chip back towards the hazard. 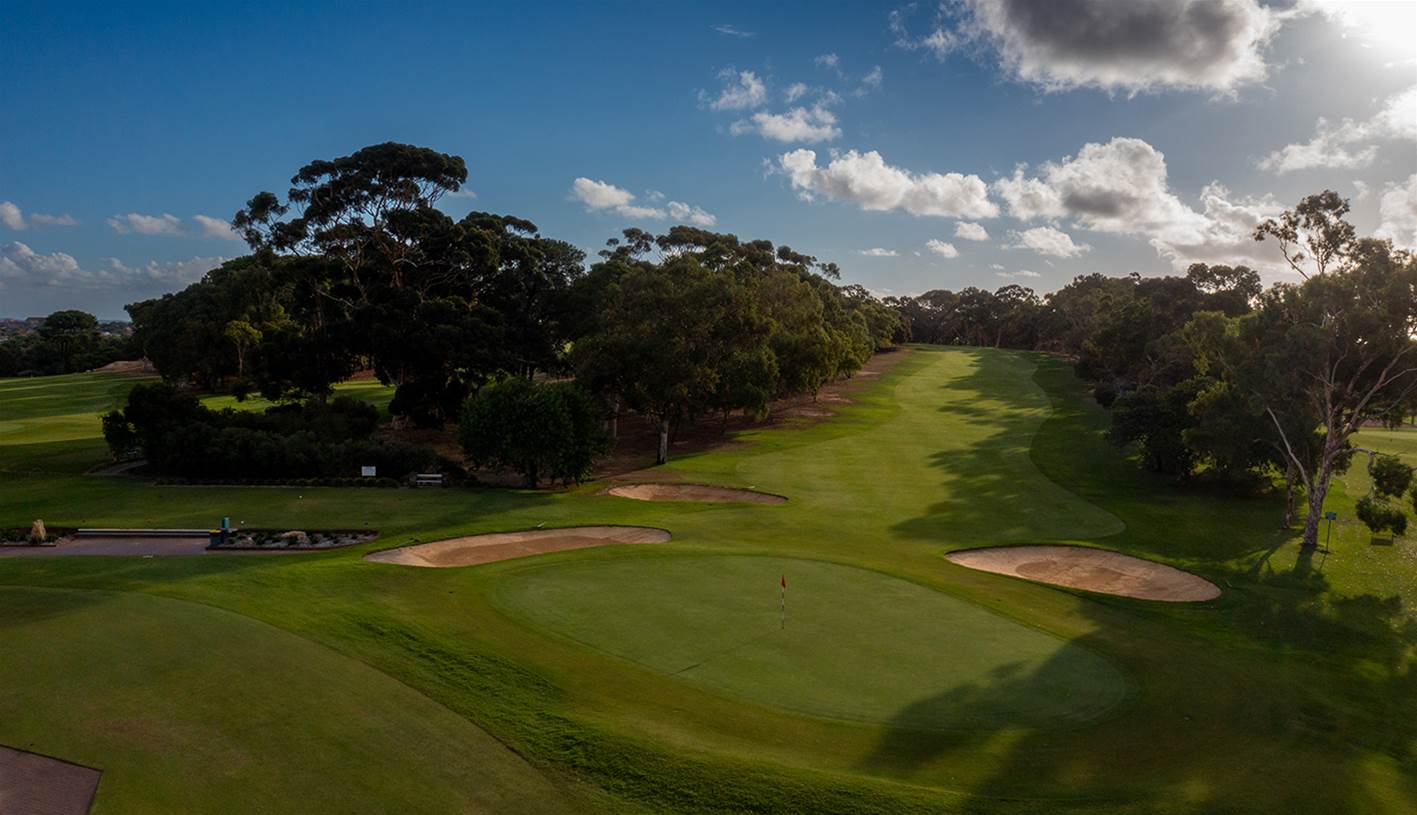 The dogleg right par-5 18th has been the scene of great drama in the WA Open. PHOTO: Brendan James.

The hardest hole at Royal Fremantle follows, giving some real strength to the closing quartet of holes.

The 393-metre par-4 16th is devoid of any bunkering but it doesn’t really need it. The dogleg left plays considerably longer on most afternoons when ‘The Fremantle Doctor’ breeze is blowing in. Heavily tree-lined on both sides of the slight uphill fairway, the 16th places only two demands on you … hit long and hit straight. Do both and you might just sneak away with a par.

Royal Fremantle is a course of enormous potential. It is laid out on superb golfing topography to make each hole different and interesting, while the deep layer of sand underneath is ideal for growing high quality turf. Having been brought up on kikuyu grass fairways in Sydney, I thought Royal Fremantle’s fairways are some of the best I’ve seen, while the putting surfaces, especially those covered with Pure Distinction bentgrass, were simply mint.

MEMBERSHIPS: Royal Fremantle offers a wide range of categories including seven-, six-, five and four-day memberships, with fees for those aged between 18 and 40 incrementally less than for those over the age of 40. There is currently a wait list for four-day Saturday members.

CORPORATE DAYS: Royal Fremantle offers the highest standards of personalised service for you and your guests and they pride themselves on their ability to exceed your corporate hospitality expectations. Each corporate event is offered full use of the locker rooms, showers and clubhouse lounge, bar and dining room.