Which is why he caught two flights and travelled 15,000 kilometres from Los Angeles to take his place in the field for the ISPS Handa Perth International. So far, the effort made has been justified.

His second round 68 has him at nine under, just two strokes adrift of leader Peter Uihlein heading into the weekend. 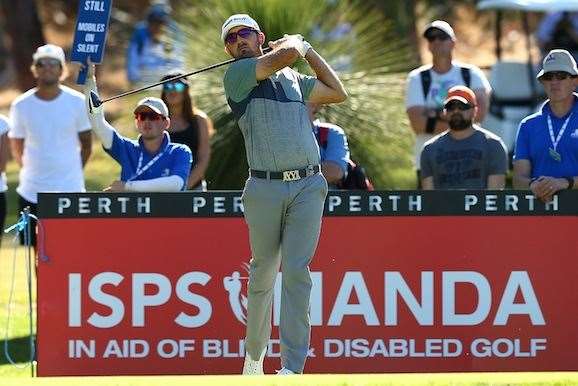 Rhein Gibson watches his tee shot on the 6th hole during the second round.
PHOTO: Paul Kane/Getty Images.

His long haul to play in Perth this week is nothing when you consider in the past 20 months he has played 54 tournaments in 14 different countries … in pursuit of that seemingly elusive maiden win. He came close in America last year, finishing runner-up twice on the Web.com Tour, which ultimately helped him gain promotion to the PGA Tour.

But his rookie year in the ‘Big Show’ has, thus far, been less than memorable, with six missed cuts from eight starts since making his debut last October. Sitting at No.192 on the PGA Tour money list with $39,740 in prizemoney, Gibson has not helped his chances to breakthrough in the United States any time soon as his lower exempt status doesn’t get him a start in any PGA Tour tournament until the end of March.

The 30-year-old, from Lismore in NSW, thought he would gamble on coming home to play Perth and next week at the New Zealand Open. He arrived in the west Australian capital on Wednesday afternoon, didn’t play a practice round but now finds himself with a chance of contending for the title.

“I love to play golf as much as I can. But last year was a beat down. I think it was 34 four-day events, so that's a lot of time away from my wife and home,” Gibson said.

“But I'm kind of in the same position this year. I'm not going to play as much but I need to play when I can play. I can't afford to take a week off because I'm not in a position to.

“Now I’m here and I feel like I'm playing pretty well. Just going to stick to my same game plan and see where it puts me on Sunday.”

Gibson said he feels he has been playing better on the PGA Tour than his results might suggest and playing well at home will help his confidence when he returns to the US next month.

“My results really haven't shown much. I feel like I've been playing better than what they have been showing,” he said.

“We just had another reshuffle after Riviera and I'm about 40th now, so I'm not going to get in any of the events in Florida. Your rookie year out there, what I've learned, what people have told me, it's obviously hardest, because it's difficult to play well and to keep your card because you've got less playing opportunities than the guys that played the year before.

“So, it was a good opportunity for me to come home and maybe get my confidence back up and get some form and take it back to the States when I start playing again.”

His confidence has taken a hammering with the string of missed cuts and a PGA Tour system where rookies have to hit the ground running to survive.

“I'm starting to get more and more comfortable (on the PGA Tour),” he said. “The first few weeks, you miss a few cuts, and then you lose your confidence. We get the bottom end of the tee times, so we're always playing on beat-up greens.

“The first four events, I don't think I finished the round in the afternoon because of daylight or slow play. It's a lot to get used to. We are also playing against guys that have seen all these courses before, so we show up on a Monday or Tuesday, we get two practice rounds and we're done.

“Or we show up to Torrey Pines, it's two courses. Pebble Beach, it's three courses. It's a lot of golf to learn in such a short period of time.” 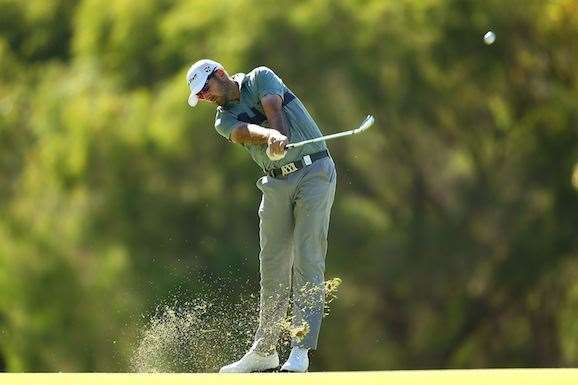 Gibson says if he was to go on and win this week he would take up his two-year exemption on the European Tour.
PHOTO: Paul Kane/Getty Images.

Lake Karrinyup holds no such mystery to him, having played the Perth International back in 2014. Knowing he would arrive too late for a practice round, he packed his yardage book from that event.

Four bogies in the first 36 holes have easily been offset by 11 birdies and an eagle, which have him placed outright fourth and round three pairing with 2010 Open Champion and tournament favourite Louis Oosthuizen.

And, if Gibson happens to win on Sunday, he will have a big decision to make? Stick with the PGA Tour, or take up a two-year exemption status on the European Tour.

“It's a tough one. I'm based in America. My wife's American. That's where I want to be. That's the ultimate goal obviously,” Gibson said.

“But I guess having the two-year exemption may take a little pressure off when I go back to the PGA Tour, so maybe my results would start getting better. And that's obviously where I want to play.

“But, worse comes to worse, I have a European Tour card, I'll play Europe next year.

“It doesn't really matter where you play these days. You play good golf, get your world ranking up, you can get into the WGC events, you can get back into all the big events to get back on the PGA Tour in the future.”