This time last year Brett Rumford was lying in a South African hospital, having had emergency surgery to remove 30cm of his small intestine because of a blockage caused by an apple he ate.

Months of recuperation followed, and even when he won the West Australian PGA and played Australia’s triple-crown tournaments at the end of 2015, he was still not 100 percent fit. His energy levels and immune system still needed close monitoring. 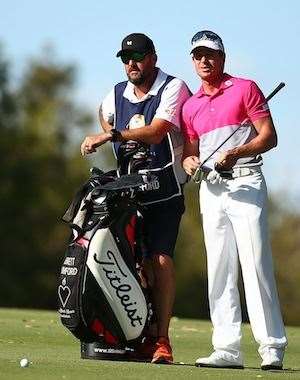 Brett Rumford talks with his caddie before playing his 2nd shot into the 18th hole.
PHOTO: Paul Kane/Getty Images

His road to a full comeback from such a life-threatening illness took a huge step in the right direction in the second round of the ISPS Handa Perth International, as he rattled off eight birdies in his seven under 65 to gain a share of the 36-hole lead with American Peter Uihlein.

Gusty, warm winds pushed the temperature well into the 30s, providing Rumford the toughest test of his body, and mind, since returning to the Tour. And he passed with flying colours.

Five front nine birdies – at the 2nd, 3rd, 6th, 7th and 9th holes – had the local hero within two shots of Uihlein, who finished his second round before Rumford had hit off. Another birdie at the par-5 11th pushed him within one stroke but he gave it straight back at the short downhill par-3 12th. With a 9-iron in hand, Rumford made a rare ball-striking error as he missed the green right and was faced with a difficult pitch. He failed to get up-and-down for his par but he shrugged it off and added two more birdies at the 14th and 15th holes before parring in for his 65.

“It was a tough day, back nine was tough because the greens got baked, which made things tricky,” Rumford said. “I’m more than pleased though … I holed some putts on the back nine, made some nice up-and-downs.

“It was hot, Peter (Senior) and I played a two-ball because Stevie Gallacher unfortunately had to pull out, so there was a lot of waiting for myself and Peter. But we kept each other company but it was just a long, really drawn out day.

“When you’re playing that well you do get a bit annoyed because you just want to get things going and keep the momentum rolling, so it was good to finish it off.

"It was just one of those days where you had to keep grinding, concentration had to be premium, and that's the kind of pressure this golf course puts on you.

“My concentration definitely waned over the last four or five holes but I did everything I could to stay hydrated and energy levels up. It was a good day all in all.” 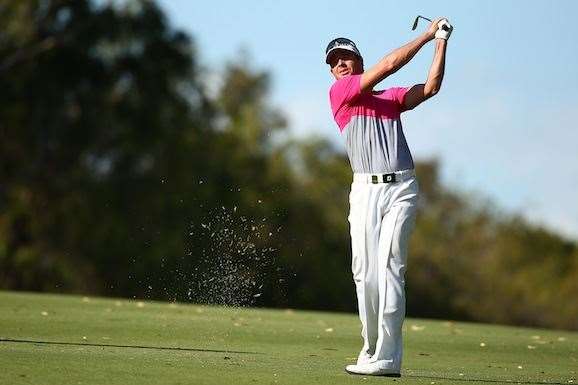 Rumford says his 65 could have been better but he's not complaining.
PHOTO: Paul Kane/Getty Images.

Rumford admitted the conditions made it the hardest physical test he has had to pass since returning from his illness.

“In this heat it was tough, no doubt about it,” he said. “These are the hottest conditions, no doubt I have played in, but the body’s great.

“It’s a hilly golf course, its going to take a lot out of you anyway, so you just need to make sure you maintain your food stocks and keep up your hydration.”

Rumford’s 65 was his lowest competitive round since the Omega European Masters in September 2014 and his best score with a short putter, which he began using in October with the anchoring ban only months away.

The World No.232 agreed his 65 was one of the best rounds he has played in this event over the years, but added he believes there could be lower to come.

“I think that was probably up there with one of the best. I still feel as though I haven't quite got the most out of most of my rounds,” Rumford said.

“I'm just feeling as though there's some momentum that's still just … that's just lacking and there's a few shots here and there that's really stopping it from being a spectacular round of golf.

“This golf course, definitely gives you so many opportunities. Like the 1st hole and the 4th hole, I missed it from five feet and six feet and you just feel as though there's just that break in that momentum of producing something really, really special. 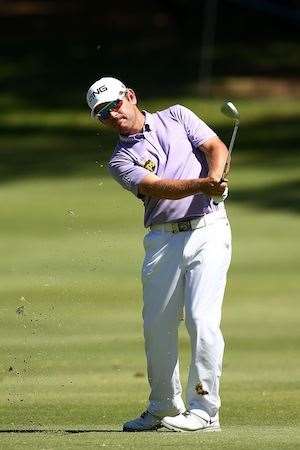 “That's sort of how every round has been up until now where no matter what I kind of shoot, it just feels as though that I've got so much more to give in terms of my performance from a scoring perspective.

“Who knows, we'll just try and attain one of those rounds, hopefully soon.”

As good as Rumford’s round was, it wasn’t the best of the day. That mantle went to tournament favourite Louis Oosthuizen, who started the round nine shots behind Uihlein and now trails by a single stroke after his eight under 64.

The South African got off to a great start with birdies at three of his first four holes. After seven straight pars, he cut loose with four consecutive birdies starting at the par-3 12th. His eighth birdie of the round came at the long par-3 17th, when he rolled in a 35-footer at perfect speed. A 63 looked on the cards when he stuffed his iron approach into the final green within four feet of the flag but missed the putt.

“I just over-read it,” Oosthuizen said of his putt for 63.

“I hit it a ball outside the hole. It might be the first real putt that I had in the shadow today. Took my glasses off and just a little bit of a misread.

“It's fine. I would have taken a par coming down there, anyway, to keep the momentum going into tomorrow.”

Oosthuizen said he hit the ball as well as he did in his opening round 70 as he did for his 64, but the difference was he left himself more ‘makeable’ birdie opportunities.

“If you want to make birdies, you can't leave yourself on the wrong side of the hole here,” the 2010 Open Champion said. “I did that well today. 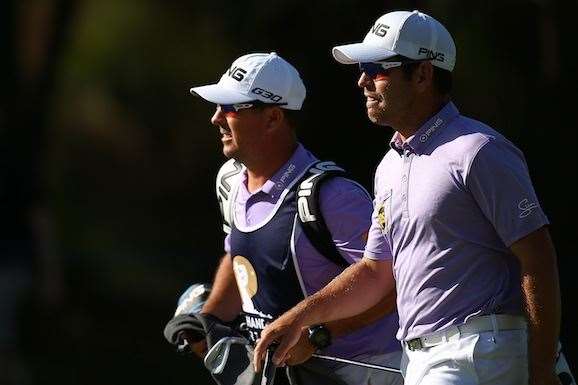 Oosthuizen and his caddie walk up the 18th fairway to generous applause.
PHOTO: Paul Kane/Getty Images.

“Yesterday on the front nine, which was my back nine, I just left myself not in good positions. So it was always going to be a speed that you hope you had the right line, but it was just the speed that's going to get close to the hole.

“Today, I managed that a bit better to give myself proper putts and to have a little bit more of a go at them. That's important. You need to work your way around the golf course.”

A mark of Oosthuizen’s superior ball-striking skills is the fact he has missed just two fairways and two greens through the first 36 holes of this tournament. If he continues to play that kind of game from tee to green he will be hoisting the trophy on Sunday afternoon.

But if Rumford gets passed him, the gallery might just chair him off the 18th green in celebration of a comeback complete. 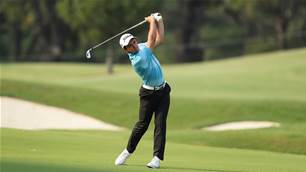