Those guilty of it often don’t even know they do it. The outraged often identify the wrong cause of the issue. And the ruling powers are yet to effectively combat it. The issue at hand is, of course, slow play.

The blight on the game, particularly in the professional arena, has recently bubbled to the surface again due to a number of incidents and examples, positive and negative, with the recent television coverage of golf in the country making it a hot button issue in Australia.

One of the causes of reignited discussion has been Sydneysider Matt Jones’ victory at The Honda Classic a couple of weeks ago. Jones’ Formula 1-like pace of play prompted many to ask the question, why can’t more players follow his example?

If every player on Tour were to follow the 40-year-old’s lead we might end up with something like the 20-20 equivalent of golf. And TV cameras would show a lot of balls already in the air, such is the ferocious speed at which Jones steps up and hits his ball.

Jones’ example is of course a positive one, so too the news today reported in the US by Golfweek that LPGA rookie Yealimi Noh was fined $10,000 for slow play last week at the Kia Classic.

"Perhaps the first point of call should be a video of Jones playing sent out to every Tour player around the world."

Noh is an extremely exciting prospect, and while a harsh reality to be dealt early in her professional life, the fine is at least a sign the LPGA is interested in doing something about the slow play issue.

The story by Beth Ann Nichols stated that this isn’t Noh’s first fine for the same indiscretion and that a rules official followed the group for nine holes, a presence Noh forgot about when taking her time on course and eventually recording a bad time.

Here in lies the issue.

100% agree @ewenmurray77 @SkySportsGolf @DellMatchPlay pace of play ridiculous. No one in front of them. Green reading books, lining up the lines on the ball. Really annoying me. And Matchplay is the fastest form of golf. Something has to be done #slowplay

The presence of a rules official shouldn’t cause a player to speed up. There should be no need for the official to be following along in the first place, because slow players will continue being slow players if they simply speed it up when required.

At home the issue was mentioned in Foxtel’s coverage of the various PGA Tour of Australasia events played over the last few months, and this publication has received multiple emails complaining of certain players, attempting to pontificate on the reason for the often glacial pace of play and demanding action.

Interestingly caddies are blamed by viewers, yet being on site at the NSW Open last week, it is the players without a lopper, even just one simply carrying the bag and pulling the flag that are often slowest. In part due to having to do all the things every social golfer does throughout the course of the round, as well as attempt to make a living.

Yardage books are another target for the armchair rules official, yet the addition of lasers does little to speed things up on Tour, it simply adds another item the laundry list of pre-shot routine items to tick off.

The books that really are an issue are the green books utilised on the biggest stages that one almost needs a degree in topography to understand and deduce that a putt break from left to right. These are doing nothing to speed up the game and remove one of the natural skills of the game.

And for those that believe the players that fall foul of any or all of the above discretions know they are doing so, a colleague told me just this week of a player identified in a number of the previously mentioned emails complaining to them about slow play.

So, what is the solution I hear you ask?

The fines of the LPGA are a start, so too Jones showing players you can win more than $1 million and play with nerves at a fast pace.

But for the small prizemoney events in this country, with more limited numbers of rules officials and conversely for the players at the top of the tree where a $10,000 fine might be paid with money found in their courtesy car glove box, money penalties don’t quite sit right personally.

Shots must be the way golfers are punished, and if any Tour is really serious about stamping out the issue the concept of disqualifications and even suspensions from the next event will truly grab attention.

Perhaps the first point of call should be a video of Jones playing sent out to every Tour player around the world and the offer to even double the amount of time he takes for each shot, because we would still end up in a much better place than we are right now. 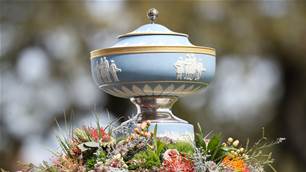