News that the PGA Tour and the European Tour are going to be working more closely together in the future wasn’t really a surprise.

There have always been rumours that the European Tour is very reliant – some might say over-reliant – on the revenue generated by the Ryder Cup matches. And at some point, in order to keep pace with the prize funds expected at the top level these days, the guys at Wentworth were inevitably going to need some help in that department. Some under-writing was always going to be required.

In contrast to the European Tour, the PGA Tour is a behemoth. The United States is the biggest commercial market in the world for sport. Everything over there is amazingly well set-up and thought-out. And the PGA Tour is no exception. Former commissioners Deane Beman and Tim Finchem both did an incredible job on that side of things. They are easily the biggest thing in world golf. So, it was only natural that, over time, they would look outside the borders of the United States.

They were already doing that, of course. For a few years now, there have been PGA Tour events in Asia. The HSBC Champions tournament in China is just one example. The PGA Tour’s fingerprints are all over that one, as is the case with the Presidents Cup. It’s just a natural thing. The US market has long been cornered. In fact, the PGA Tour has more sponsors than tournaments. So, again, looking abroad makes sense.

Golf, of course, has always been an international game. But never more so than today. The explosion of the game in Asia has added to the mix. There are massive economies in countries like China, India, Malaysia and South Korea. And they are all producing world-class players. So, the opportunity is there for the PGA Tour to expand their product without really affecting their core product at home.

"In effect, the PGA Tour is becoming FIFA, the organisation that runs world football – or soccer, depending on where you live." – Geoff Ogilvy

Having said that, the whole thing feels to me – from a European Tour point of view – a bit like, ‘if we can’t beat them, let’s join them.’ Which is not to say that not everyone will benefit.

I’ve always thought the game worldwide was going to be run in the same way the PGA Tour run things in the States. And this is just another step down that road. In effect, the PGA Tour is becoming FIFA, the organisation that runs world football – or soccer, depending on where you live.

The timing makes sense too. I’m sure the European Tour spent a lot of money propping up the tournaments they put on in 2020. So, an influx of capital would be welcome on their end. Plus, the climax to the 2020 Race to Dubai was a little strange in that there were two Americans in contention for the title. One, Patrick Reed, had played in Europe once during the season, which was once more than his compatriot, Collin Morikawa. That situation illustrates how closely tied the two Tours were becoming even before this latest announcement. All the majors and all the World Golf Championships already count on both money lists.

All of the above makes sense though. The PGA Tour operation in Ponte Vedra Beach, Florida is pretty slick. They know what they are doing. Their network and their reach for making money is outrageous. So, this latest development is great, if only because an alliance between Wentworth and Ponte Vedra Beach makes both Tours stronger if a battle with the Premier Golf League (PGL), we’ve all heard so much about over the last few months, is ever going to be necessary.

Indeed, I suspect that fact was a motivation for both Tours too. The word on the street was that the PGL had made the European Tour an offer. There is more to all of this than just a natural development that may have grown and blossomed over time anyway. Besides, as I said, everyone should benefit from this new alliance. The players will, so will the spectators and the television viewers. In other words, it has strengthened the status quo.

I wouldn’t expect too much to happen right away though. The 2021 European Tour schedule didn’t display much evidence of PGA Tour involvement. It’s too soon for that. But Commissioner Jay Monahan and his staff are very good at the long game. The basic principle of this deal has surely been under discussion for a few years now. This is not a short-gain game play. Yes, it’s about making the PGA Tour and European Tour bigger and better. But it will also be about simply making golf a better worldwide product in an ever-more competitive marketplace.

Looking a little further ahead than this year, I can see a few co-sanctioned events popping up in 2022. And the period between the Tour Championship that is the season-ending event on the PGA Tour and the end of the calendar year is going to look a lot different. I don’t know for sure, but I can see an attractive international schedule emerging in that time frame. That would make sense.

"Yes, it’s about making the PGA Tour and European Tour bigger and better. But it will also be about simply making golf a better worldwide product in an ever-more competitive marketplace." – Geoff Ogilvy

The PGA Tour has always been enhanced by the presence of international players. It wouldn’t be as good today if the likes of Rory McIlroy, Luke Donald, Justin Rose, Adam Scott, Sergio Garcia, Marc Leishman and Cameron Smith were not members. Throw in the Ryder Cup and the PGA Tour is a massive beneficiary. So, yet again, a strong alliance is sensible. In that, everyone should be on the same team. We all want great tournaments that make a lot of cash for charity and, in which, the best players make a lot of money too.

What all of this means for Australia remains to be seen. Many of our best players – me included – and those from elsewhere have made their way to the PGA Tour through the European Tour. That fact alone made us all better players. Ernie Els. Greg Norman, Retief Goosen. Ian Baker-Finch. I could go on and on, especially when you add in the best Europeans … Seve Ballesteros. Bernhard Langer. Sandy Lyle. Ian Woosnam. Nick Faldo. Jose Maria Olazabal. Those guys basically broke down barriers between the PGA Tour and the rest of the world.

Anyway, how is this brave new world going to work in practical terms? Maybe we just have, say, 1,000 exempt players and each one played in whatever event was appropriate to their ranking on that list. I can see it evolving into something like the ATP tennis tour. There would be a number of tournaments going on each week, all under the same umbrella. Maybe that is how we get to a World Tour, every part of the world having at least one “top tier” event each year.

That scenario would only benefit Australia. There is no real downside to any of this. We could be playing a bigger role in some of the elite tournaments. I mean, wouldn’t it be great to see the very best players down here every year for, say, a couple of weeks? How good would that be for the game in this country? 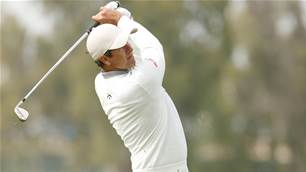