Teenager Lydia Ko cemented her World No.1 ranking with a great victory in the ISPA Handa Women’s Australian Open.

Teenager Lydia Ko cemented her World No.1 ranking with a great victory in the ISPA Handa Women’s Australian Open. She’s now eyeing off winning majors, and lots of them.

Teenager Lydia Ko has been World No.1 for a tick over three weeks. At 17, she’s the youngest player ever to reach that summit – man or woman. Even Tiger Woods didn’t achieve the feat until he was 21.

Based on her winning performance at the ISPS Handa Women’s Australian Open, she will have a lock on the top spot for a long time … a very long time. 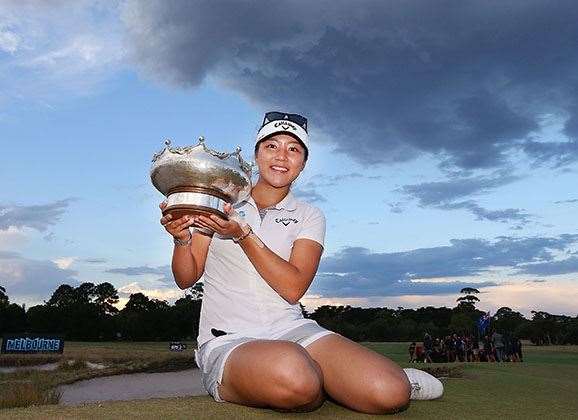 When put to the test on one of the world’s best championship layouts, Ko was equal to the task. Royal Melbourne’s Composite course was a fierce challenge and most of the field had every right to feel out of their comfort zone. Ko, on the other hand, didn’t.

She simply outplayed and out-thought the rest of the field on a tough course to win the Patricia Bridges Bowl with a closing 71 for a nine under total and a two-stroke victory over Korea’s Amy Yang.

“To win around Royal Melbourne is really special,” Ko said. “There’s no other course like these Sandbelt courses. To win on such an amazing course here … it’s amazing.

“I had so much fun when I was playing here in 2012 but to come out on top here and say I beat the golf course is pretty awesome. It’s so tough and you can see by the scores that it’s hard to make one birdie.”

The victory, her first as World No.1, was Ko’s sixth on the LPGA Tour and her ninth in a professional tournament. She is also the youngest player ever to win the Australian Open. Ko seemingly breaks records with every start she has on Tour but it’s almost impossible to fathom that a younger player will ever win this championship … at least not while Ko is competing. 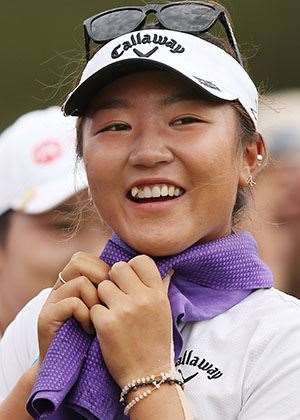 Ko keeps cool and smiling during the final round. PHOTO: Getty Images

“It’s pretty cool. It’s cool that I’m actually on the LPGA as a tour member as a 17-year-old and just to be one of the youngest tour members is another special thing but to be able to win here is amazing,” Ko said.

“It’s been so much fun playing here. It’s pretty awesome. I feel so fortunate that I can play these great tournaments at these great golf courses and travel around the world. That’s the most important thing, that I’m having fun and I’m getting all these great opportunities.

“Winning is another great thing but just being able to play here is my favourite thing.”

It became apparent early in the final round that the winner would come from the trio of Ko, Thailand’s Ariya Jutanugarn and Yang, who was playing ahead in the penultimate group.

The 54-hole leaders, Ko and Jutanugarn, both made nervous starts with bogies at the opening hole and fell back to six under and tied with Yang … but only briefly.

Moments later, Yang rolled in a big right-to-left putt from 20 feet on the short par-4 3rd hole to move to seven under and the outright lead by one. The Korean’s time at the top was fleeting though as Ko followed a good drive with a pitch in eagle two at the same hole to leapfrog Yang into the lead at eight under.

Jutanugarn was seemingly caught in the middle of a shootout between Ko and Yang and she couldn’t keep pace with them as a series of wayward tee shots and missed putts saw her drop three shots in the first eight holes.

Ko and Yang, a two-time US Open runner up, continued to exchange the lead or shared pole position several times throughout the round.

Under the pressure of trying to win a national championship, Ko would prove too tough to topple because when she made a mistake from tee to green she minimised the damage every time with a terrific chip shot or a great putt. Errors on the greens were simply few and far between.

Such was the case on the short par-4 8th when Ko’s wedge approach careered through the green and rolled down a steep embankment to leave a 30-metre pitch that was virtually impossible to get close to the flag. Her first attempt to get on the green, her third shot, dropped short and she was then faced with a difficult chip and run onto the green. She played a very good chip and was left with a 10 foot putt for her bogey, which she rolled in and would prove to be a turning point.

“After I hit the shot, I said, ‘I should have just hit that (second) shot the first time’,” she said.

“Even if I didn’t make a par, it’s an easier bogey and I had to work really hard for that bogey.

“I think that bogey putt was really good and if I’d made a double, today could have been a whole different story.”

The bogey saw her lose the outright lead as Yang rolled in another a long bomb birdie, this time from 30 feet at the par-4 9th hole.

As Ko and Jutanugarn walked to the 9th tee, defending champion Karrie Webb was tapping in on the 18th for her second consecutive two under 71 to finish at one over. It was the last shot played for 80 minutes as tournament officials sounded the siren to clear the course due to lightning storms in the area. 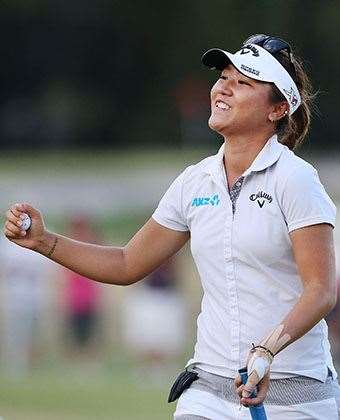 Job done. Ko smiles after putting out at the 72nd hole and the win assured. PHOTO: Getty Images

Yang’s first shot after the delay was a 15-foot eagle putt on the par-5 10th hole. It was a solid stroke but the ball danced around the lip and stayed out, leaving the shortest of tap-in birdie putts to give her another stint as the outright leader at eight under. She was joined again a short time later by Ko, who converted a five-foot birdie putt on the same hole.

The deadlock between Ko and Yang was broken at the par-4 12th when Ko smashed a driver over the corner of the left-to-right dogleg and smoothed a short iron into 10 feet from the flag. She converted the birdie to move one stroke clear of Yang and from there she was never going to surrender her advantage. Ko’s five “smart” patient pars to close the round ensured a famous victory.

After the round, Ko said being patient was the key to winning.

“Here, there are so many putts that can be so close but then end up being a couple of feet by and you look back and think ‘how did I make that bogey?’ but it’s kind of easy to do. It’s hard to make birdies but so easy to make bogeys or worse.

“I think just patience, that’s what I tried to have. I was talking to David (Leadbetter) yesterday and he said ‘Lydia, you’ve just got to have that patience and just wait for the birdies to come’.”

Not only does this victory validate Ko’s rise to World No.1, it sends a message to her fellow competitors, who have aspirations of winning major championships.

“I reckon this is one of the toughest courses we play,” Ko said.

“Some courses, without the wind it plays easy but here, with or without, it’s tough. Just to know I’ve played well on these type of courses gives me a lot of confidence (for the majors) but next week is a totally different course.

“I’ll be changing a little bit of my technique. It’s just one week at a time and this is definitely a great start to my season.”

Ko, who will start a university course in psychology next month, is 17-years-old and plans to “retire” at 30. That means she can potentially play 65 major championships over the next 13 years. Based on the Royal Melbourne test, there is no course she will ever face a tougher challenge on … even in the majors.

At Royal Melbourne, Ko was great. For those who were there to witness it’s hard to discount her becoming the greatest major winner of all time, man or woman, over the next decade. 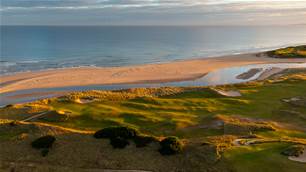 VIDEO: What is your favourite Aussie course? VOTE NOW & WIN