By the presumably informed calculation of a guy going by the name, Tiger Woods, the Open Championship is not scheduled to return to the Old Course at St. Andrews until 2030. This is no bad thing.

Eight years is a good amount of time, more than enough to get things done and effect change. Because both are badly needed if the past few days are anything to go by.

The combination of golf’s oldest and most important championship and the game’s most famous venue has not been the most edifying spectacle from a pure golf point of view.

Okay, there are some things about an Open on the Old Course that just have to be suffered in silence. The double greens and the criss-crossing of holes around the loop make pace of play an enduring and unsolvable issue. Likewise, the compromises that have to be made by the enormous galleries roaming the premises. Unable to get into the middle of the narrow course at any point, we are forever forced to watch from a distance on the sidelines.

But none of the above mitigates the amount of long grass that currently suffocates the very soul of golf’s greatest architectural monument. On a course that should exclusively feature the game’s most interesting and thought-provoking hazard – short grass – the playing of so many holes this week has been negatively affected by the presence of unseemly rough. 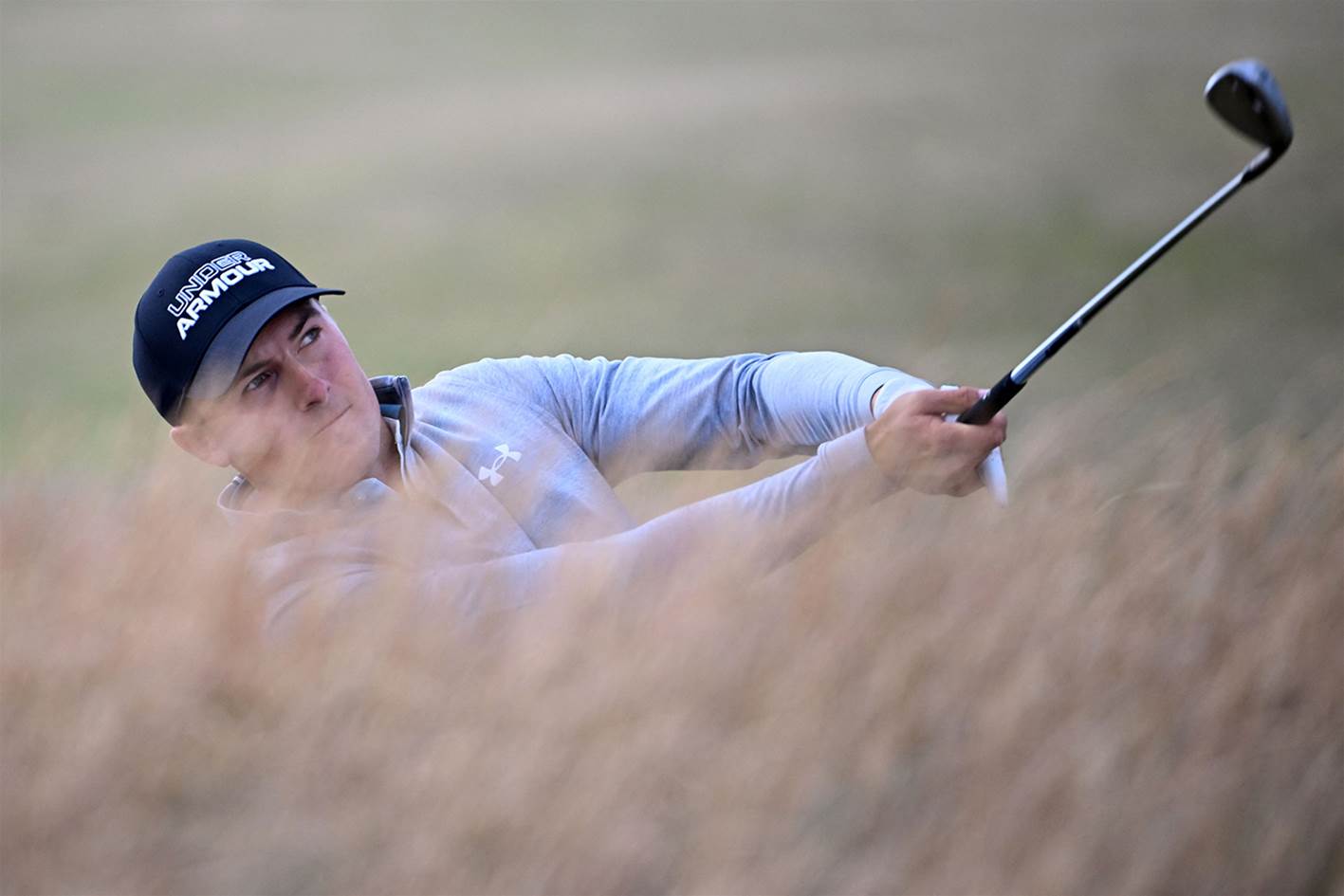 Jordan Spieth plays from the rough left of the 13th hole. But it was a good angle to the flag. PHOTO: Getty Images.

How many times this week have you seen golf’s leading players missing fairways? “Often” is the answer.

How many times have you heard a television commentator mention how a player has a “great angle’ into one of the Old Course’s vast putting surfaces, only to look up and see said competitor standing in long grass up to his knees? “Often” is again the answer.

Allow me to join up the dots. The root problem here is the distances elite professional golfers currently hit golf balls. With drives routinely flying well over 300-yards - and running another 100 or so in the firm-and-fast conditions we’ve seen this week - the players are capable of reducing the Old Course to little more than a pitch-and-putt layout. Actually, “drive-and-putt” would be a more appropriate description. Or, in the case of the once proud par-4 18th, “hybrid-and-putt.” 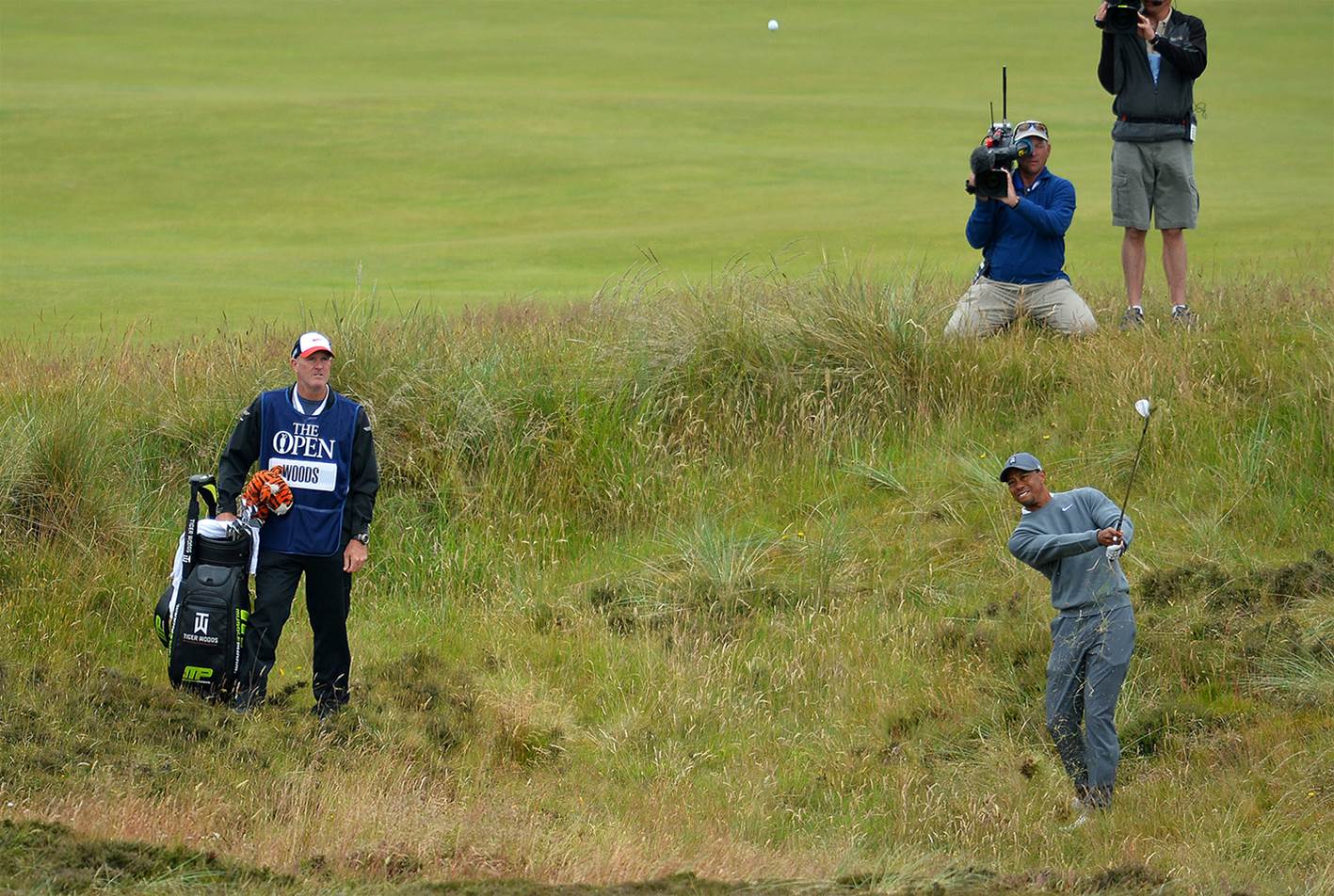 Tiger Woods pitches out of the rough on the par-5 5th hole. PHOTO: Getty Images.

As a consequence of that fact – one our rulesmakers, the R&A and USGA continue to prevaricate over – the essence of the Old Course is lost. The aforementioned 18th used to be one of the most fascinating holes in all of golf. It used to matter enormously where a tee-shot finished in relation to both the Valley of Sin that fronts the green and, of course, the pin itself. Now, that strategic relationship is no more, the hole little more than a (not-so) long par-3.

The same is true elsewhere. The original point of the Old Course, the reason it became the model for every other course on the planet, is increasingly hard to determine. It used to be that four players could stand on just about any tee and each could come up with a different way to make his or her way from tee-to-green. There hasn’t been much of that this week has there? With the sad introduction of the aforementioned long grass, options at St. Andrews have been reduced to debates over whether to order a single or a double ice cream cone.

So “distance” is the root cause of what we have witnessed this week. Faced with that fact, the people running the show have allowed the grass to grow in a forlorn effort to restrain the howitzers populating the upper echelons of the professional game. But only at the opening hole has that made any difference. Protected by the presence of the Swilcan Burn rather than rough, the 1st forces the players to hit something less than driver from the tee. For the first (and often, last) time, position rather than length is the order of the day.

Okay, so the first link in this unfortunate chain of events is in place. Excessive distance leads inexorably to the growing of rough. But that still isn’t enough to challenge the best in the game, at least in the minds of those charged with setting-up the course. As U.S Open champion Matt Fitzpatrick and others have pointed out, the pin positions have at times bordered on ludicrous.

"It’s not hard to figure out. Shorter drives will restore the subtlety and nuance of our game’s most interesting venue. There will be no need for any long grass. None. The greens won’t need to be quite so fast. And the pin positions can return to the right side of sanity." – John Huggan.

“You see where the pins are,” said the Englishman. “A lot of them are incredibly tucked, just to try and protect the course as much as possible. I hit the green on 12 and had no putt. The pin was tucked on top of a hill. I hit what I thought was a good putt and it ran 12-feet past. A lot of stuff like that has been done, to protect the scores from going lower, I guess.”

By the way, the speed of the greens also has an effect on pace of play. Faster greens, balls trickling off to four feet rather than pulling up stiff, means slower play. That’s just a fact.

Admittedly, the unusually hot weather has contributed to a situation where the greens (and fairways) have sometimes resembled near-frictionless surfaces. But, combined with, as Fitzpatrick pointed out, holes that have often been cut on slopes or on top of knobs, we have been treated to some unsavoury sights. World-class players putting off greens and into bunkers diminishes rather than enhances this great championship. That’s not golf, no matter how much the yahoos in the crowd might enjoy it. 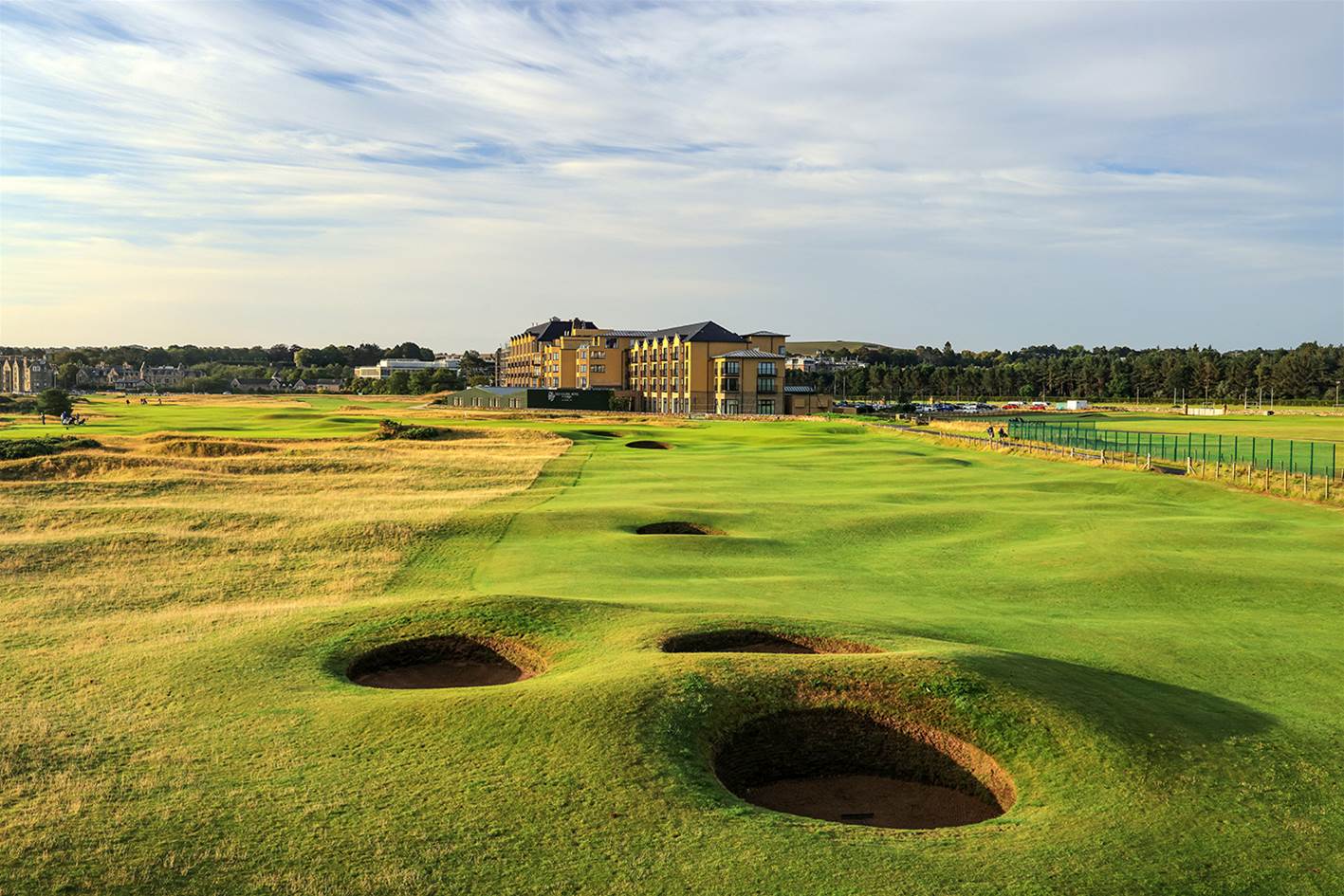 the famed Principal’s Nose bunker complex and Deacon Sime bunker beyond on the 16th hole used to be well-placed in the centre of the fairway, leaving playing lines left and right of the sand creating angles into the green. PHOTO: Getty Images.

So, what have we got so far? Too much rough. Silly pin positions. And greens that are running too fast to make those (ugh) “hole locations” more palatable.

The end result is that the soul of the Old Course has been lost. Not completely mind you.

A look at the quality atop the leaderboard is evidence enough that this wonderful venue has still been able to identify the best of the best. But it could have been so much better. So much more interesting.

Let’s hope that two things happen in 2030. Let’s hope that Woods is well enough to play a part in the championship he has twice won over the Old Course. And let’s hope that, before then, another chain reaction has been well established, one that legislates on clubs and balls and so protects all of our great courses. Starting with the Old Course.

It’s not hard to figure out. Shorter drives will restore the subtlety and nuance of our game’s most interesting venue. There will be no need for any long grass. None. The greens won’t need to be quite so fast. And the pin positions can return to the right side of sanity. It’ll be great folks.

Imagine watching, say, Tiger and Rory playing the same holes in markedly different ways, rather than following the same tedious plan, one dictated to them by faceless bureaucrats and the presence of golf’s most boring hazard, long grass. Imagine watching them figure things out in their own ways rather than simply flailing away off the tee. Tell me that isn’t so much better than what we’ve seen this week.

Huggan: Was this really goodbye, Tiger?

Huggan: LIV a little … but not too much