It took nine appearances and four previous top-10 finishes before Fred Couples finally broke through at Augusta National to win the 1992 Masters and enter the major winner’s circle.

“Boom Boom” defeated his fellow American, friend, mentor and 1976 Masters champion Raymond Floyd by two shots in what might sound like – at least on paper – a relatively stress-free Sunday.

But Couples, then 32, began the final round trailing 54-hole leader – Australia’s Craig Parry – by one shot after the third round ran into the final day due to thunderstorms suspending much of Saturday’s action.

Rounds of 69-66-69 had Parry at 12 under and seemingly 18 holes away from becoming Australia’s first Masters champion.

Parry, playing alongside Couples, was quick to create a three-shot buffer in the final round, birdieing the par-5 2nd hole as Couples made bogey. However that would be the last birdie Parry would make for the tournament, carding bogies at 3, 4, 5, 7, 10, 16 and 18, as a vocal partisan gallery intimidated the then 26-year-old playing in his second Masters. “I three-putted three holes in a row and the crowd clapped every time. I’ve never seen anything so one-sided,” Parry said after the final round.

RIGHT: Parry was less than impressed with the patrons during the Masters in 1992. PHOTO: Getty Images.

“You can understand people wanting their own players to win. That happens everywhere. But I thought that the crowd behaviour today was even worse than last year when they heckled Ian Woosnam because they thought he was going to beat Tom Watson. That makes it very hard to play well.

“The spectators were so one-eyed that it made it very hard to play. It was even distracting Freddie.”

Couples birdied the 3rd, before making two more at 8 and 9 to take the outright lead heading into the back nine.

The then World No.1 arrived at the iconic par-3 12th leading by two shots, before receiving the “biggest break” of his career.

Couples aimed left of the traditional Sunday pin position, taking the cautious approach, but blocked his shot and watched in horror as his ball landed on the steep slope between the green and Rae’s Creek. Somehow, his ball stopped two feet from the water’s edge and he was able to salvage his par in what has since become known as his “bank shot”.

Writing for Sports Illustrated, Rick Reilly summarised the title-defining moment as follows: “A ball has about as much chance of stopping on that bank as a marble does of stopping halfway down a drainpipe.”

The Seattle-born player navigated the rest of Amen Corner safely and went on to birdie the par-4 14th – as did Floyd – to maintain his three-shot cushion and eventually seal his maiden major title.

“I don’t know how it stayed dry. The biggest break, probably, of my life,” Couples said of his tee shot at 12 after Woosnam presented him with his green jacket. “I’m not so sure what would have happened if it would have went in the water like everybody else’s.”

AUSSIE NEAR MISSES AT AUGUSTA

Ferrier had five top-five finishes at Augusta in his career. His best shot at the title came in 1950 when he led the field by five shots as he walked to the 13th tee. The New South Welshman then proceeded to bogey five of the next six holes to lose by two shots to American Jimmy Demaret. Ferrier led by five shots with six holes to play at the 1950 Masters. PHOTO: Getty Images.

The Aussie ‘Bruce’s’ both finished in the top-five behind winner Jack Nicklaus. Crampton had the best shot at bringing down the Golden Bear after coming from eight shots back to get within a few strokes of Nicklaus on the final day. It was the first of four major runner-up finishes to Nicklaus that Crampton would suffer over the next three years.

The New South Welshman charged home in the final round, cutting Seve Ballesteros’ eight-shot advantage to just three. But the Spanish sensation rallied and made birdie at the par-5 15th to eventually win by four shots over Newton and American Gibby Gilbert.

The Queenslander’s heartache at Augusta began in 1981 and he had six close calls over the next 18 years. Having missed a play-off with Jack Nicklaus in 1986 by one shot, Norman found himself in extra time a year later with Seve Ballesteros and Larry Mize. He was in good shape too, but then Mize pulled off a miracle – chipping in from 140 feet right of the flag on the 11th green. Norman couldn’t get his putt to fall and came up one shot short yet again.

In 1996, it looked like Norman was finally going to breakthrough as he held a six-shot lead over Nick Faldo heading into the final round. Nobody, despite Norman’s shaky history at the tournament, could have predicted the worst collapse of the Shark’s career – a six-over 78 to Faldo’s five-under 67.

The Victorian led by one shot over Justin Rose and Tiger Woods heading into the final round. But his opening-hole triple bogey quickly set the tone for a disappointing three-over 75, which saw him slip to a share of seventh place, four shots behind the winning Zach Johnson.

Adam Scott, Jason Day and Geoff Ogilvy each held a share of the lead during the final round, as overnight leader Rory McIlroy collapsed with a disastrous eight-over 80. Day birdied the final two holes to join Scott as the clubhouse leader, before South African Charl Schwartzel rocketed home – becoming the first player to birdie the final four holes – to best the Aussie duo by two shots. 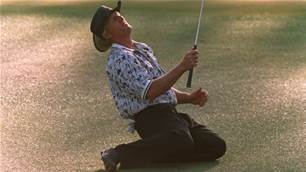 Australian heartache at the Masters 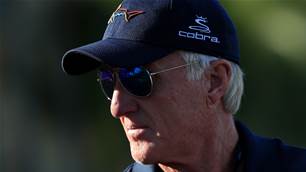 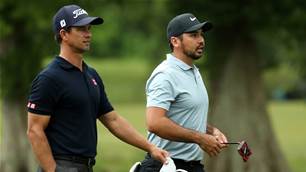