The role of Karrie Webb in mentoring Hannah Green to major championship glory has been well documented but the influence of another woman has been equal – or perhaps even more important – in the development of Australia’s third women’s Grand Slam tournament winner.

“If it wasn’t for her,” says Hannah Green matter-of-factly, “I wouldn’t be playing golf.”

Green has never made a secret of the fact her start in the game was somewhat awkward. Like many young girls with an interest in golf a huge barrier presented early on: finding others her own age to play with.

As an 11-year-old member at Hartfield in Perth there was only one other junior girl at the club. That meant the pair regularly had to tee up alongside men not only twice and three times their age but vastly superior in skill.

“I don’t think they minded,” says Green, “but it was pretty daunting for us, especially playing off 45 at the time when they were much better players than that.”

Under those circumstances, Green says she likely would have eventually drifted away from golf towards swimming or tennis. “I was only playing about once a month because it wasn’t really that enjoyable. I loved the game but I wanted to play with others my own age and level.”

Enter the Graham Marsh Junior Golf Foundation. Playing one of their events during school holidays, Green befriended a fellow competitor and that meeting ultimately changed not only her relationship with the game but her career – and life – trajectory.

“She was a member at Mount Lawley,” says Green. “She told me there were quite a few junior girls there and I remember thinking how cool that would be, to be able to play all the time with girls my own age and who were the same skill level.”

After attending a clinic at the club shortly after, the decision was made that she should join.

And that’s where she first met Sue Thomson, the woman without whom she “wouldn’t be playing golf now”.

Sue Thomson is the junior co-ordinator at Mount Lawley and has been for as long as most people can remember.

Along with fellow members Shirley Reynolds and Shonna Gobby, the trio has developed a hugely successful program at the club which includes a significant number of young girls.

It was here that Green found her golfing nirvana and began to develop the game that would eventually deliver a major championship.

For Sue, though, none of that is really important.

Yes, she’s ecstatic for Hannah that her golf dreams are coming true, but really, you could take the word ‘golf’ out of that sentence and it would be just as accurate.

“I’ve always had a bit of a special relationship with Hannah I suppose but it’s not really about the golf,” says Sue.

“The whole reason I do what I do at the club isn’t to produce professional golfers. I do it because I want young girls to have the same opportunity I have had to have golf be such a big and important part of my life.

“More than any other sport, golf is a game for life and it’s about giving that gift to the next generation, to be able to find a sport they can love and enjoy with friends for the rest of their life.” While Green often credits meeting Thomson as the real starting point of her golf career, it is in fact a woman she has likely never heard of who deserves the ultimate credit.

Avis Squire was Sue’s mum and it was Avis’ desire to find an activity away from the family farm that brought golf into Sue’s life.

“By the time she was 35, mum had five children and she needed to get off the farm,” says Sue with a laugh. “I’m sure that’s what it was about.”

It was a golf clinic advertised in the local paper which Avis attended and subsequently became hooked on the game.

“She went along. I don’t think she knew any of the other ladies but she really enjoyed it and when she finished the clinics she was hooked.

“That’s when she joined Narcanup Golf Club (in regional WA).”

Not long after, Sue’s dad also began to play (“he figured if he couldn’t beat her he might as well join her”) and not long after that Sue herself began to tag along.

“At first it was a good way to get off the farm on a Sunday, but once I started having a hit I really fell in love with it,” she says.

“And it wasn’t long before it became something really special that me and my dad could share.

“He would meet the bus at the farm gate after school and we would hit balls up and down one of the paddocks together all afternoon.

“And of course after you’ve hit them all one way you have to walk down there to hit them back. And those times were just so special.

“He taught me so much about life as we walked up and down the paddock … he shaped the person that I am in those times.” Green’s winning par putt on its way at the 72nd hole of the KPMG Women’s PGA. PHOTO: Getty Images.

These are the same sorts of gifts Sue wishes for her junior girls. The birdies and bogies on the course are a part of the game but the bigger life lessons to be learned and the relationships developed trump even a major championship.

“I would rather Hannah underachieve in her career and be happy than win multiple majors and be miserable,” she says.

Green says she understands exactly what Sue is saying and points to that attitude as one of her greatest strengths as a mentor.

“One of my friends growing up was a very talented golfer as well and could probably have been a pro if she wanted to,” says Green.

“But she always wanted to be a physiotherapist and Sue understood that and never pushed her to pursue her golf.

“As long as we are happy, she is happy, and it doesn’t matter whether it’s because we’re playing golf or doing something else.”

“I would rather Hannah underachieve in her career and be happy than win multiple majors and be miserable.” – Sue Thomson

While Green has undoubtedly benefitted on the course from her relationship with Karrie Webb, she has also absorbed some life lessons off it from Sue Thomson.

“I’ve never met anyone who asks so little for what she does,” says Green.

“There was a ‘Pretty In Pink’ tournament at Mount Lawley at the start of the year and Sue did everything for it.

“She made the cupcakes and organised all the banners and everything. And she never, ever asks anything for it.

“In fact, I think she’d probably prefer to do that than play her own golf. I can’t imagine how many hours she puts in.”

Asked if she feels some of these lessons might have rubbed off on her, Green pauses to consider and a realisation seems to crystallise.

Green attended the ‘Pretty In Pink’ tournament herself (without being asked, she just happened to be at home for the week) and when home from the US is a regular sight at Mount Lawley encouraging the junior girls.

She was famously given a poem by a little girl as she waited to hit from the 8th tee Sunday at the KPMG Women’s PGA she went on to win, a little girl she had signed a ball for at the ANA Inspiration major tournament earlier in the year. The West Australian rose to prominence as an amateur, finishing runner-up to Lydia Ko in New Zealand in 2015. PHOTO: Getty Images.

By her own admission, if she sees a junior on the golf course, “I always give them something or say hello … just to be noticed by someone at a higher level makes you feel good.”

“I want to do it and don’t feel like I have to do it,” she says of these acts of kindness.

“But I suppose Sue has set an example in that way and I see that and I want to do my bit as well.”

As just the third Australian woman to claim one of the game’s most important tournaments, Green has already reserved for herself a special place in history.

And just as with any successful professional, there have been many to have made a contribution along the way to her ultimate success.

Sue Thomson takes no credit for Green’s on-course accomplishments, nor does she take any credit for the 22-year-old’s remarkable maturity off it.

But there is no doubt that in her own way she has played a role in Green arriving at this point in her career.

Because let’s be honest, as Green herself notes: without Sue Thomson, she wouldn’t even be playing golf. 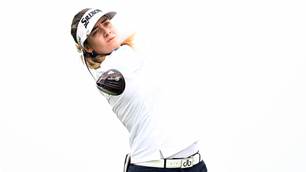 Morri: The long and the short of it