Adam Scott is closing in a spot at the lucrative PGA Tour's season-ending Tour Championship as he heads into the final round of the penultimate play-off event just two shots off the lead.

Scott carded an even-par 70 on another demanding day at Olympia Fields to sit at one-over and in a three-way share of third after 54 holes of the BMW Championship.

The 2013 Masters champion offset birdies at the 4th and 15th holes with bogeys on 8 and 17 as he chases his second win this year - to to add to his Genesis Invitational title won in February.

"I've played good and bad this week, and I've had basically the same score every day," Scott said.

"I saw today, though, that if I hit it well, there's a chance to make a few putts.

"One of this leading group will shoot four under tomorrow, four or five under I'm sure."

Scott is now projected to finish 23rd on the season-long FedExCup standings with only the top-30 advancing to next week's $45 million ($A62.5m) Tour Championship in Atlanta, Georgia.

World No.1 Dustin Johnson is 21 shots worse to par than he was a week ago but still looks to be the player to beat as he matched Hideki Matsuyama with a round of one-under 69 on Saturday to share the lead with the Japanese star at one-under 209. 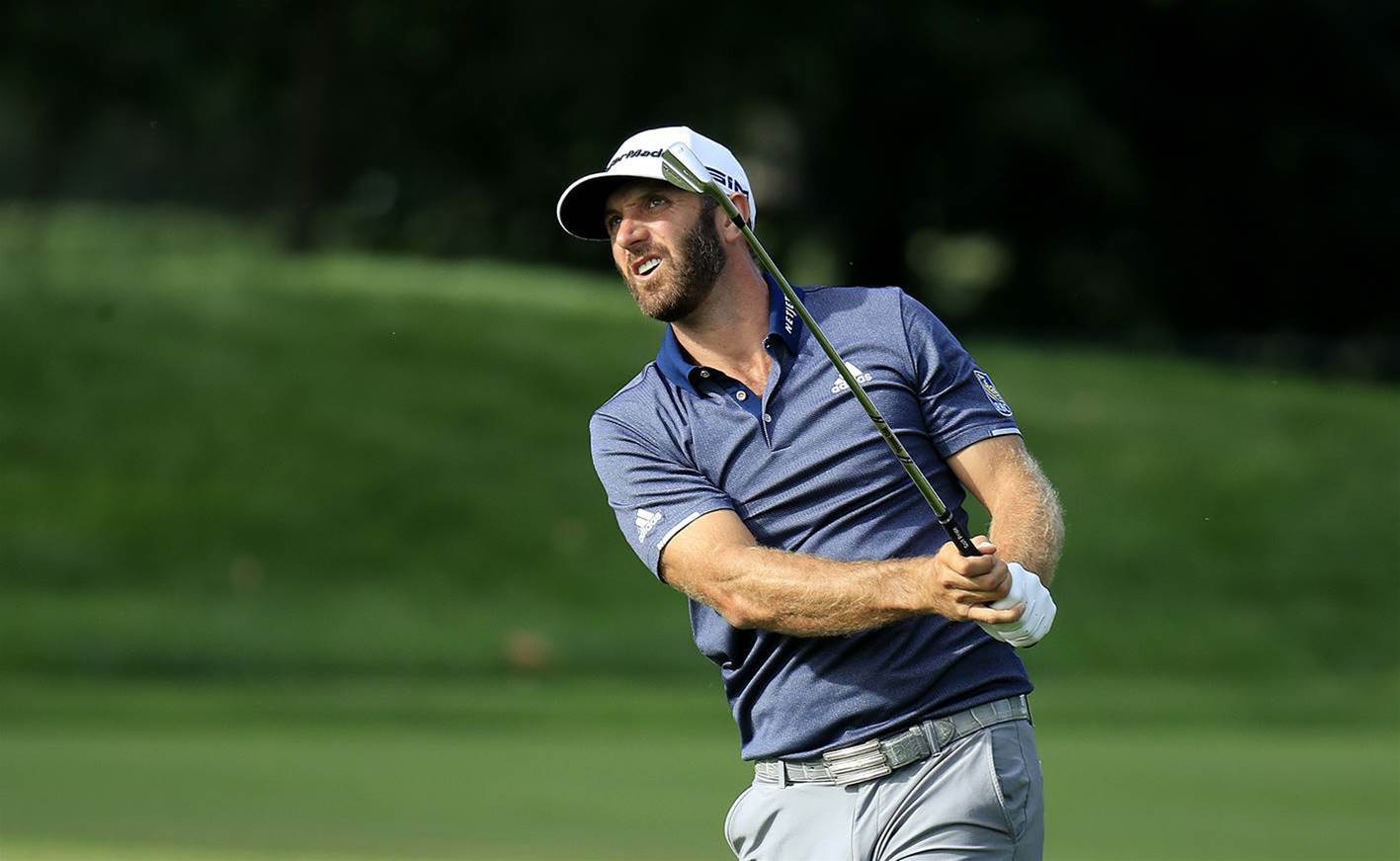 Dustin Johnson's good form continues and he shares the lead going into the final round. PHOTO: Getty Images.

Every other player was over par going into the final round. Only two players enter the final round under par, almost unheard of in modern PGA Tour memory. The last non-major won with an even-par score was by Billy Mayfair at the 1995 Tour Championship, while Bruce Lietzke remains the last player to win a non-major with an over-par score, as he won the 1981 AT&T Byron Nelson at 1-over.

“It’s just difficult,” said Scott, who is second in the field in Strokes Gained: Putting. “Yesterday I think the greens were a little harder. A couple of them looked like they held a bit of water today but then others didn't, so you had to be really paying attention to the color of the green and hopefully you pitched the ball in the right area, which was hard to know whether you were right or not.

“Generally keeping it under the hole is very difficult, so then you're left with putts that break a lot and are very fast. You can't expect to make them all.”

Only Matsuyama and Johnson appear to have such sort of expectation. Matsuyama leads the field both in Strokes Gained: Tee-to-Green this week as well as around the greens, a surefire recipe to erase what has been a three-year winless drought on Tour.

“Great start and then just had to hang on. Just tried to do what I could to stay in, and I was happy with how it went,” said Matsuyama, who opened with a 37-foot eagle at the par-5 opening hole before adding another birdied at the fourth. “Different wind today, the wind direction was different, so it played different, but very happy with how I played and how it went.

“I played great these three days, so I just need to hit the ball well tomorrow and putt well and see where I'm at.” 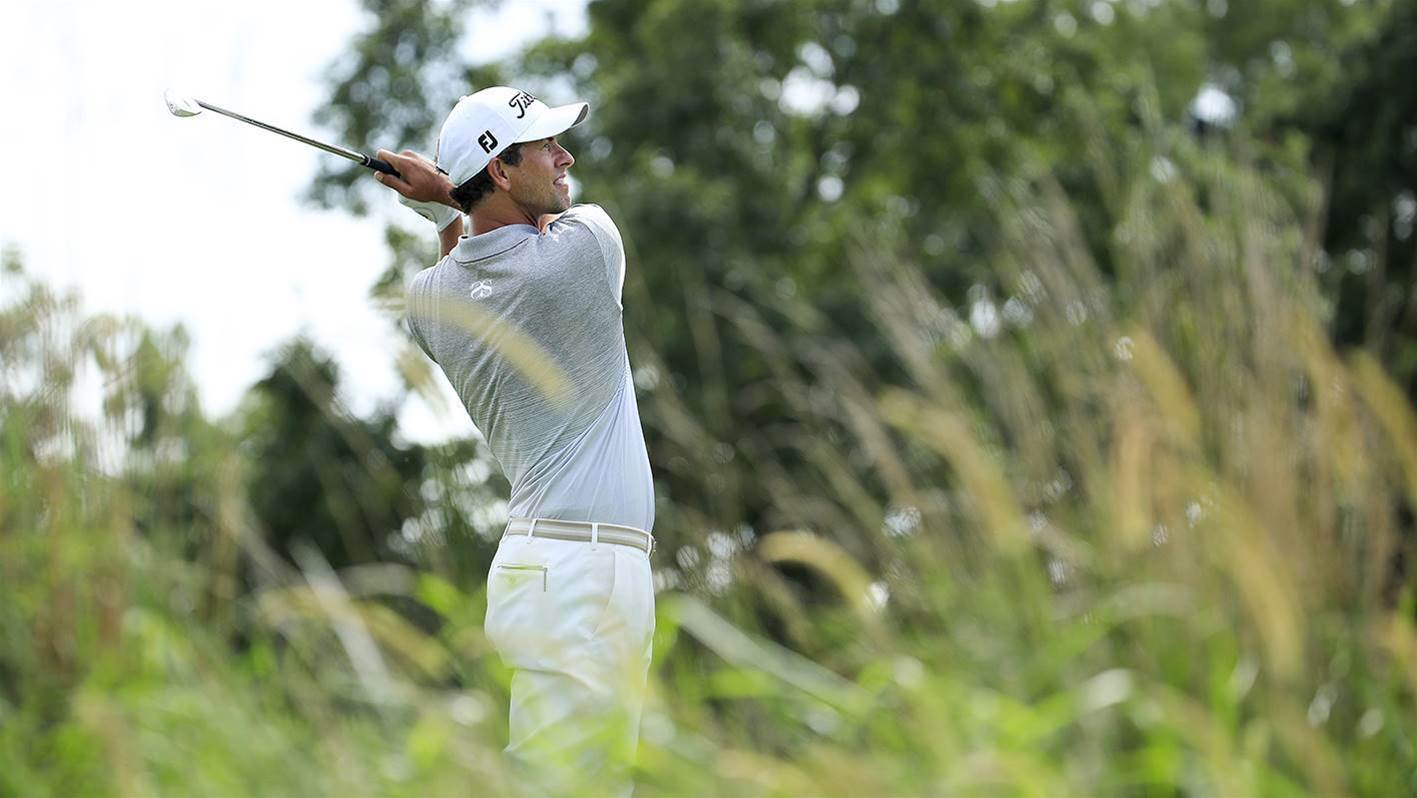 Scott is looking to add a second PGA Tour title in 2020 to the resume. PHOTO: Getty Images.

Queenslander Cameron Smith catapulted himself back into Tour Championship reckoning with a two-under 68 on moving day lifting him to a share of 26th at six-over.

A finish of 33rd or better at Olympia Fields will secure his spot next week after he started the week 26th in the standings.

Former World No.1 Jason Day's play-off hopes are gone with a six-over 76 leaving him 17 shots off the leaders.

Marc Leishman is the only Australian to have already qualified for Tour Championship but his form needs a dramatic upswing after his 79 left him 27-over-par and last in the field.

Second-round leaders Rory McIlroy (73) and Patrick Cantlay (75) went backwards and it could cost the American a spot in the Tour Championship.

McIlroy had to play left-handed to escape the base of a tree on the 10th but despite sliding down to a share of sixth he had good news to share post round.

The Irishman announced his wife is expecting their first child, partly explaining his wandering mind the past few weeks.

Jon Rahm matched the low round of the day at 66 that could have easily been one shot better if not for a blunder that even he couldn't believe.

He forgot to set a marker down on the green before picking up his golf ball on the 5th hole.

"I was thinking of somebody else or something else ... and yeah, I just picked up the ball without marking it, simple as that," Rahm said after a round that left him only three behind.

A triple-bogey seven on the 17th ruined Tiger Woods' hopes of breaking par for the first time this week and he signed for a 72 with his PGA season all but done at 10-over-par.